Supernatural Left Me With Something to Remember It By 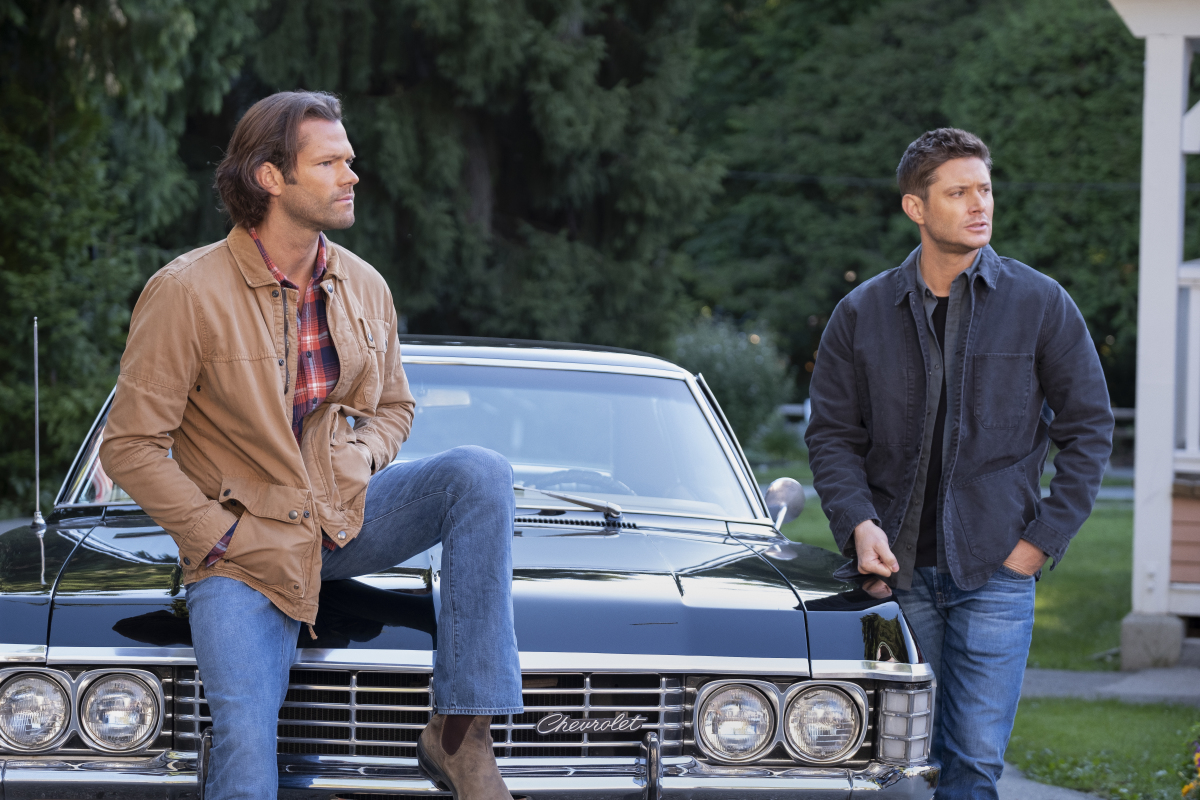 So, this week, I cried over a car part. And a tile. And a piece of plaid. It may sound weird to you normal folks, but for those of us who have been with Supernatural for a very long time, the reason I’m crying (yes, present tense) will make a bit more sense. As a final gift to journalists and others who have been part of the show, Warner Brothers and The CW sent out two very special mementos of Supernatural, and they are incredible mementos of an incredible series.

First, Supernatural wouldn’t be Supernatural without Baby, the iconic 1967 Chevrolet Impala that stayed with the Winchesters in their hardest moment and was their home when they had nothing else. There were many “Babies” used on the series: three hero cars, three stunt cars, and one disassembled version. The hero cars went exactly where they were meant to when the series wrapped: to Jensen Ackles and Jared Padalecki’s garages, with a third remaining with Warner Brothers. And as a remembrance of SPN, some parts were removed from one of these cars and shared with those of us who have covered the show. 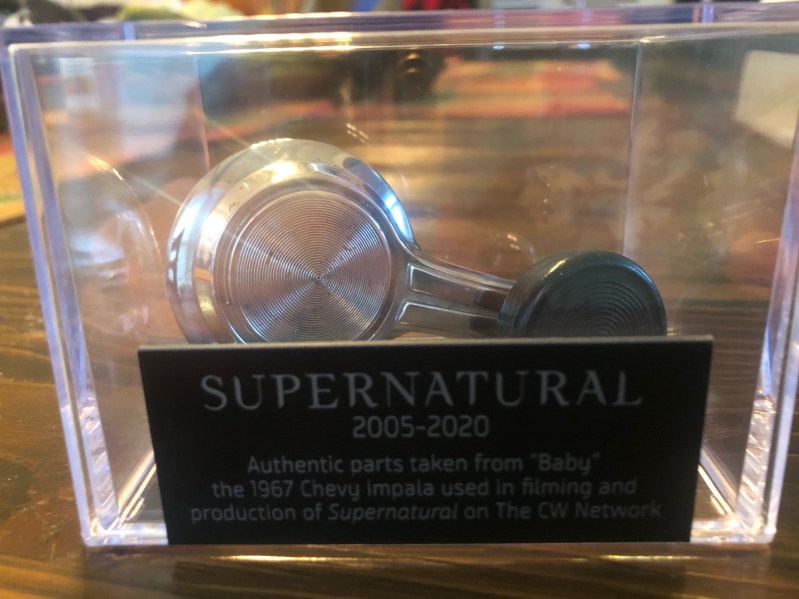 When I unwrapped this, I burst into years. I feel incredibly honored to have this little window crank. It’s sitting next to me right now, and I know I’m going to keep this little treasure forever and decades from now I’ll get to explain to people why I treat a car part like a Faberge egg.

But that wasn’t all. The folks at Warner Brothers television, who have worked on this show as long as it’s been around, sent another piece of Supernatural out, and it was also amazing. The shadow box included a swatch of genuine Winchester flannel and a tile from the Men of Letters bunker (the Winchesters; other home and the longest standing set in the show’s history) signed by “The Boys.” Each framed piece was customized for the 115 people that received them. 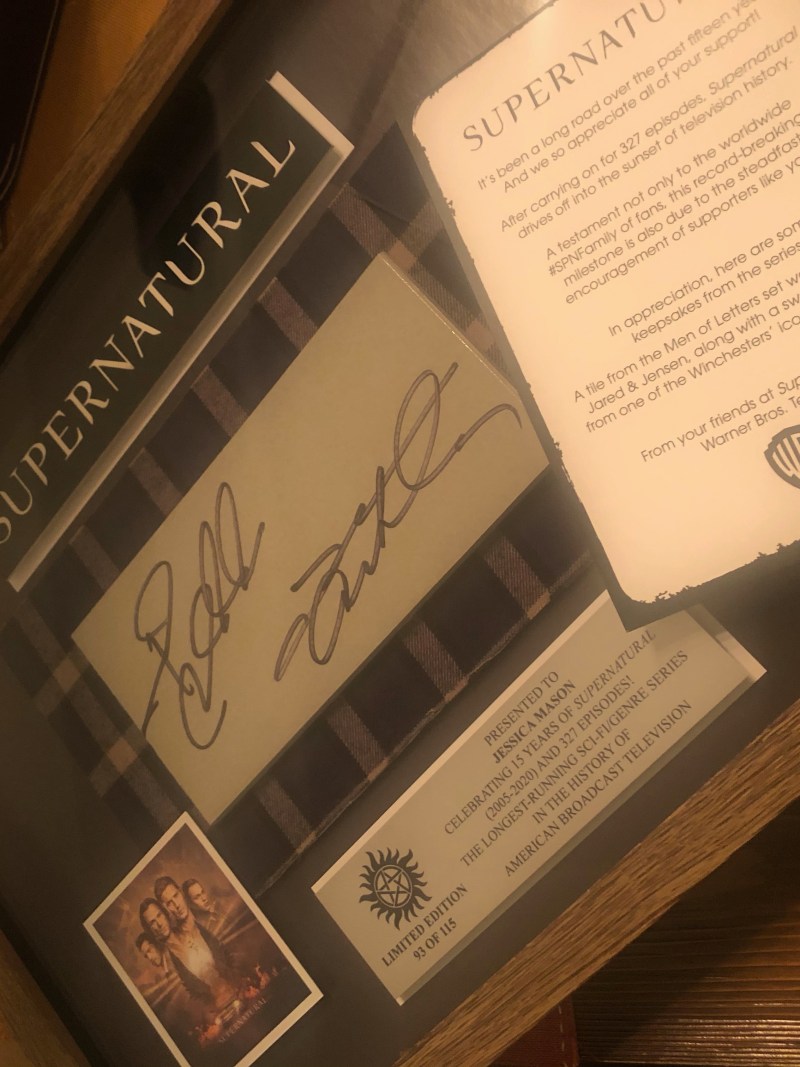 I’ll have a lot to say for the rest of the week about the end of Supernatural. But this really makes the goodbye real. It’s been so strange to cover the show this year, to see the end delayed by six months (though now the finale, “Carry On” will air on the 44th anniversary of the release of “Carry On Wayward Son” by Kansas, November 19th). It stings that there will be no final party, no screenings. It hurts more that the amazing cast and crew of the show never got their own big final goodbye. Especially this year, these gifts really do mean a lot to all of us who have covered the show and who have had the huge privilege to be just a tiny part of Sam and Dean’s story.

I’ve been writing about Supernatural since I started this career. In fact, it’s because of Supernatural that I got into media writing and journalism in the first place. Somehow, I started a third career and made a leap from fan to a journalist because of a wild show where improbably handsome men shoot ghosts in the face. And so these souvenirs aren’t just going to remind me of a show I loved with my whole heart, they’re going to remind me of the kind of incredible things I, or anyone, can do when you pursue a dream motivated by passion and love.

For us fans, shows are rarely just shows. They are so much more. They’re magic that way. The meaning a story can hold for us can imbue a simple object like a window crank, a tile, a piece of cloth with so much importance. They become more than just things, they’re huge lessons and uncountable memories and even a little bit of hope made corporeal.  So thank you, to a show that changed my life for all this magic and for letting me keep a small piece of it.

And as a final note, there will be a chance for fans to bid on their pwn pieces of the set, as well as wardrobe and props, in an online auction this December! We’ll definitely keep you updated but for now, carry on.