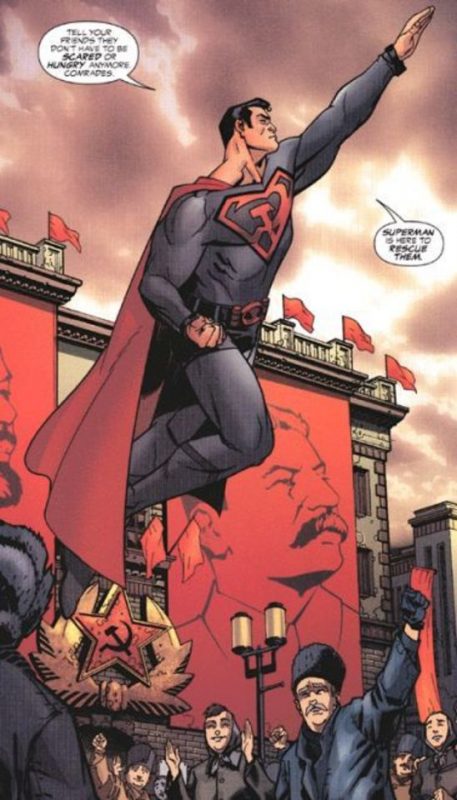 According to Den of Geeks, Warner Bros. has been talking to several top directors about the possibilities of directing a live-action film based on Millar’s Elseworlds series. For those who don’t know, Red Son is an alternate Superman story that explores what might have happened if Superman were born in Ukraine and raised under the Soviet Union, rather than crash landing in Kansas.

The chatter seems to have been confirmed on Twitter by Millar himself in a discussion with director Jordan Vogt-Roberts (Kong: Skull Island):

Wait, really? Because I pitched it to them months ago and was told no. It’s the most punk rock thing the DCEU could do in my mind.

Vogt-Roberts then brought up a really great point: a movie like Red Son might be just the jolt the comic book movie genre needs right now, as opposed to continuing to expand an already bloated single cinematic universe. One-off, standalone stories, like Logan for example, would provide a nice counterbalance to the DCEU as it exists now.

There’s also the fact that a story about the relationship between Russia and the U.S. has suddenly become relevant again. Millar had begun nurturing the kernel of the idea for this story the last time a story like this would be this relevant. In an essay he wrote on the title back in 2003, he explained, “As a kid growing up in the shadow of the Cold War, the notion of what might have happened if the Soviets had reached him first just seemed fascinating to me.”

While Den of Geeks has confirmed that conversations are definitely happening, that’s the only definite thing about this project. It’s all just talk at the moment. Millar isn’t even sure how serious the planning is, saying:

“Is this something they’re genuinely planning? I have no idea. I’ve got pals at Warner Bros but never discussed it with them. I think they’re just going through their back catalogue of big books and hoping to lure in good directors as opposed to any particular interest in developing Red Son.

“There’s always 50 conversations for every comic book movie that gets made and as far as I know this is something that is very much just at conversation stage.”

And today, Vogt-Roberts commented on Twitter along the same lines:

Re: Red Son story. I have no idea if this is being developed. I pitched it to DC as something *i want to do* not something they pitched me.

What would Russia having a “Red Son” mean in today’s political landscape? It’s certainly an intriguing prospect. What do you think? Would you be down for a live-action Superman: Red Son movie? Would you want to see Henry Cavill play this alternate version of Superman, or are you more New Universe, New Rules and open to a new Superman? Let’s chat about the possibilities below!