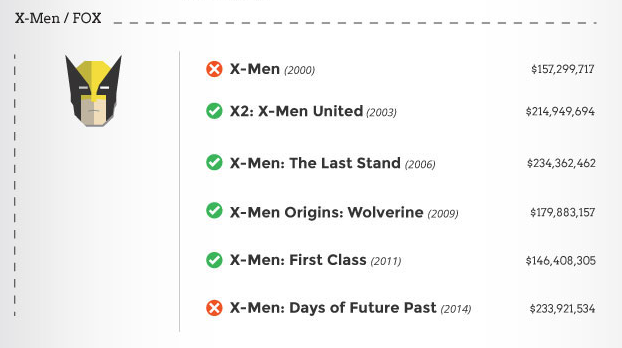 Aw man. When Elektra can accomplish something that most major superhero-themed blockbusters can’t, that’s probably not a good sign.

The Daily Dot and Land and Sea Co. have joined up to create this informative (and adorable) chart, which breaks down exactly how many modern superhero films feature a scene with two women talking about something other than a man. You can see a bigger version of it over at the Daily Dot, on which you can read when each movie was released and how much they all made. For now, though, we can certainly get the gist of how the graph organizes things by production company and lead character:

Note that while 2005’s Fantastic Four and 2007’s Fantastic Four: Rise of the Silver Surfer aren’t on there for some reason, neither of them pass. Though Silver Surfer admittedly comes real close when Susan and Alicia talk about her upcoming wedding, the conversation quickly turns to Ben. At least two women are talking, right?

If we’re going by straight numbers, Marvel Studios definitely has the most movies that pass the test at 5 out of 12—which still isn’t great, by the way. Percentage-wise, though, 21th Century Fox wins out with their series of X-Men movies; only 2 of the 6 don’t pass the test. Meanwhile, both of Sony’s Spider-Man franchises did the worst, because of course they did. After all, there are only two female characters to begin with, Aunt May and Love Interest (Gwen or Mary-Jane, take your pick).

Of course, passing or failing the Bechdel test doesn’t determine a film’s overall merit or even its merit as a feminist work. After all, Avengers and Winter Soldier are fantastic movies with complex female characters, despite the fact that Maria Hill and Natasha Romanoff never quite seem to get the chance to talk one-on-one in either of them. Meanwhile, Elektra and Catwoman both passed specifically because they both have a female protagonist and not because either of them are any good, which they aren’t.

So obviously the real solution is to introduce more female characters into each franchise and then give them all more to do with one another. Pretty easy, right? Right?