Sisters are doin' it for themselves. 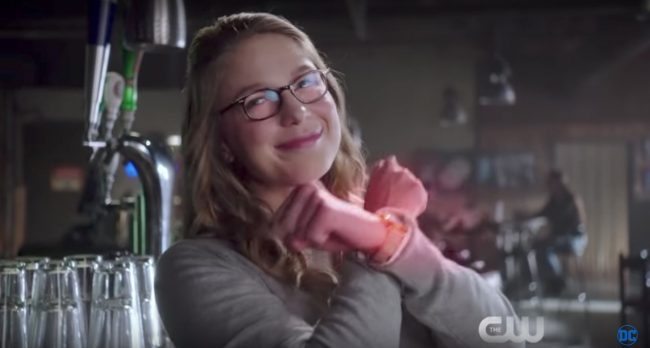 It’s pretty sweet to see the women of the DC TV and movie universes supporting each other, let me tell ya. This latest TV spot for Wonder Woman does just that by rolling out the big guns from Supergirl: Rhea (Teri Hatcher), Alex (Chyler Leigh), Kara/Supergirl herself (Melissa Benoist), and none other than the classic Wonder Woman herself, Lynda Carter, whose turn as President (!) Olivia Marsden has been pretty darn sweet.

The spot’s very … well, footwear-centric—as if you couldn’t tell by the opening notes of the backing track, “These Boots Are Made For Walkin’,” by Nancy Sinatra. But it’s not just some sleight against “oh, pah, women and their shoes,” it’s actually a pretty neat crossover reference as it’s shown that Supergirl is wearing Wonder Woman’s iconic gear. And, of course, it’s true what Rhea says: those boots are seriously hecking nice. I also couldn’t help but crack a smile on this cold, as-of-right-now-coffeeless day as Kara brought her wrists together in Wonder Woman’s crossed arms defensive pose, showing that she’s wearing her gauntlets, too.

Then, of course, Carter steps in and offers a wink in reply to Kara’s statement that she “borrowed them from a friend.” God, Supergirl has its fair share of some meta references (and obviously, this spot isn’t technically “part of the show” per se), but I want to say I am all here for the women of the entire DC universe boosting each other up like this. You’re damn right they’d be sharing armor and equipment, especially if it helps them stand up against alien invaders.

Or even if it’s to help promote their silver screen sibling who’s only received minimal support from her studio. Sisters doin’ it for themselves.

(Before anybody points it out because of course someone will: I already know that DC uploaded the Supergirl promo. Just let me enjoy one of the only bits of Wonder Woman hype-building that isn’t a gosh darn diet nutrition bar.)