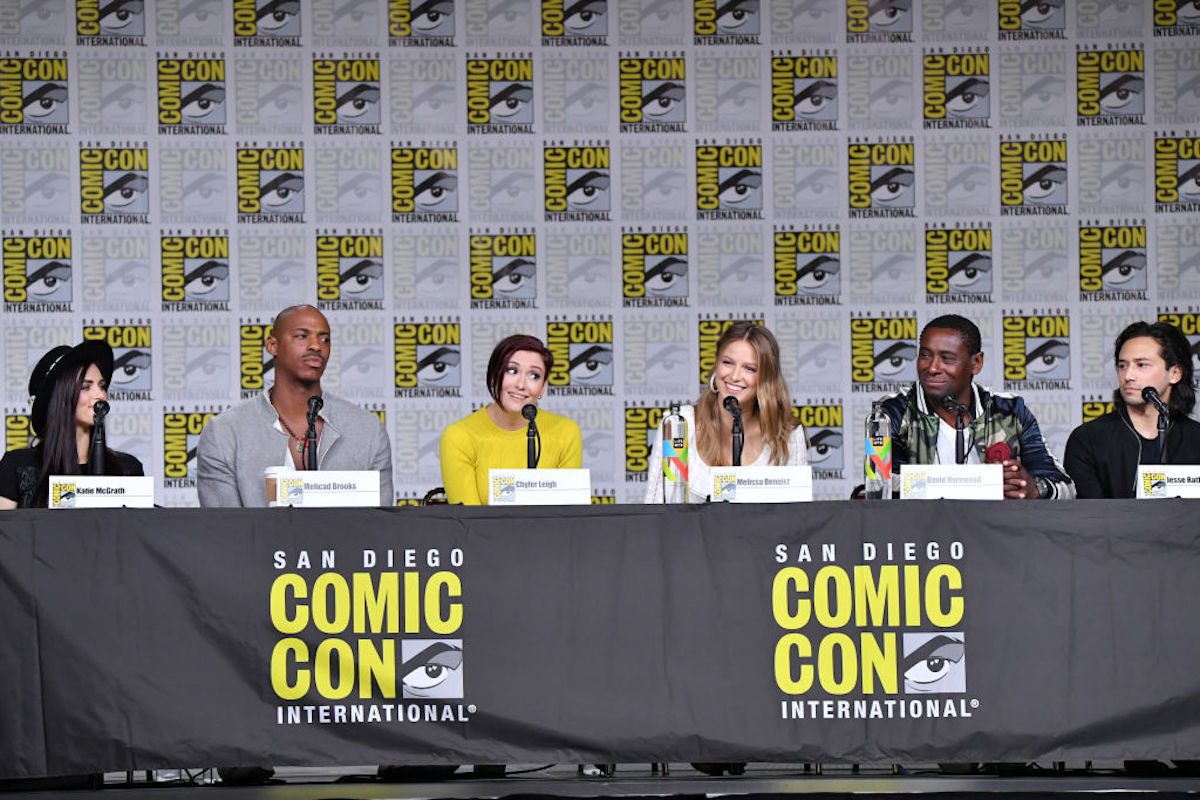 This world is scary right now, and I bet many of us wish that a hero would come along and truly stand up for reason, compassion and hope in the face of the fear and hate taking hold in the news cycle. Well, those dreams may be coming true … at least on the small screen this fall, when Supergirl returns for its fourth season. We sat down with some of the cast and producers, at San Diego Comic-Con 2018, to discuss the upcoming season and how the focus will be on how humans can be just as scary as space monsters, but anyone can be a hero, cape or not.

While last season of Supergirl was concerned with world-killers, the Legion of Superheroes, and other celestial issues, season four promises to be much more grounded—literally. We’re staying on Earth, and our main villain will be Agent Liberty, played by Sam Witwer, who Katie McGrath (Lena Luthor) described as both “smart” and “evil,” but still very human.

Supergirl has never shied away from politics, tackling gun control, racism, and police brutality just last season. They’re doubling down, but that shouldn’t be a surprise: “Superman, the comics from the late 30s and 40s have always told stories about real life issues,” explained executive producer Jessica Queller, “and Supergirl stands for hope, help and compassion for all, so it’s in the DNA of these character to be champions of the underdog, and reflect through the lens of superheroes stuff that people in the real world.”

Queller went on to say that she thinks Supergirl is the perfect show to take on some of these issues, “And have maybe some wish fulfillment of how someone … as hopeful and powerful as Supergirl could address them.” According to executive producer Robert Rovner, the theme this year is “What is stronger: hope or fear?”

It won’t just be Supergirl fighting the good fight, though. It will be Kara Danvers. “This is the season where Kara becomes as much a hero as Supergirl,” Rovner said, and she’ll do that as a reporter, fighting for the free press. Star Melissa Benoist (who jetted into Comic-Con for a single day off from playing Carol King on Broadway) is very excited to see more of Kara’s journalistic side.

She explained, “Kara Danvers is such an important part of Supergirl,” both the show and the person, but for Benoist, it’s “especially the journalistic side of things and how she’s a hero in being a reporter.” This season, Kara will not only be working at CatCo as a journalist, but as a mentor to Nia Nal, a protégé of Cat Grant, sent from Washington to be guided by Kara. Nia also happens to be a superhero who can dream the future, called Dreamer. Oh, and she’s the first ever trans superhero. 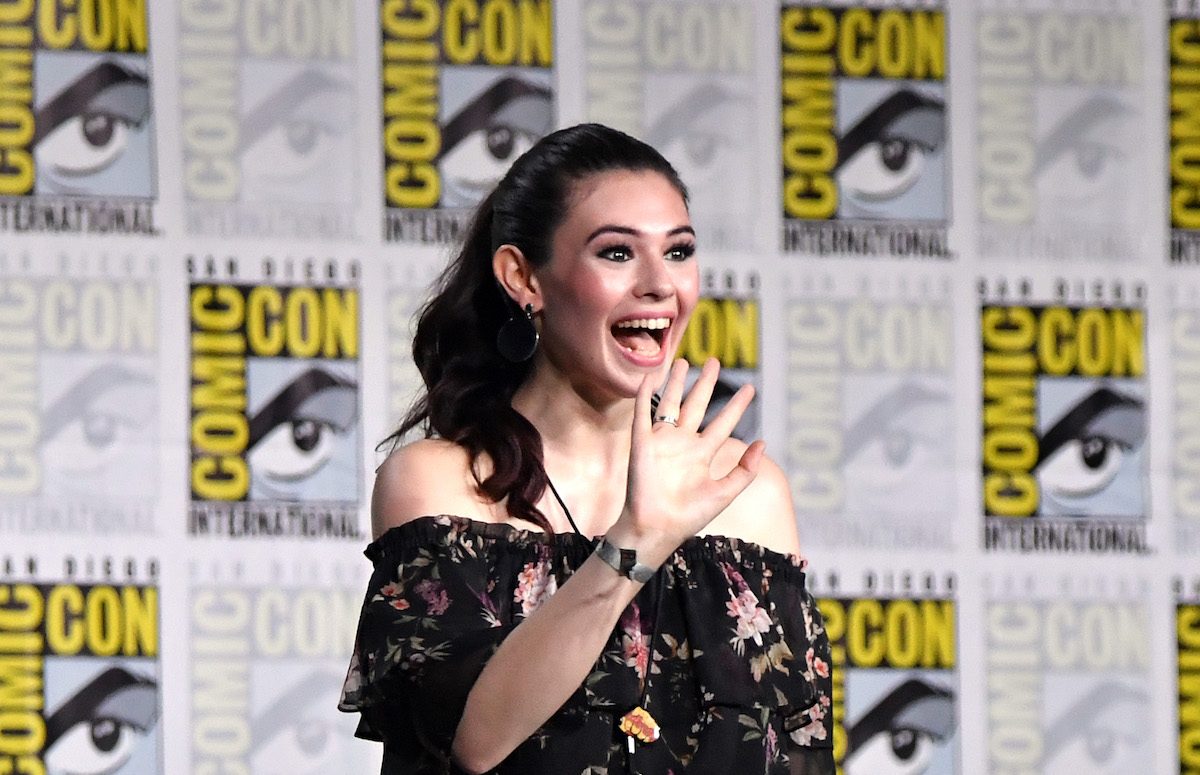 It was announced at Comic-Con that Nia will be played by actress and longtime trans activist Nicole Maines, and the producers are effusive about having her. “We did a worldwide search for trans actors,” said Queller, “and we hit the jackpot with Nicole Maines. She’s an incredible actress; she’s a real life hero.

Like tackling Trump, showcasing the first trans superhero seemed natural for Supergirl. “The show is all about representation and inclusion,” said Rovner. “We thought it was important that we show a trans superhero on television … The way things change is by seeing people represented on television and we’re excited to do that.” Benoist as well is ready for the story to progress: “I’m really excited about Nia Nal and in more ways than one, not just for what she’ll mean to people, and the story she’ll be telling and how inspiring she’ll be; but Kara and her relationship is very special.”

Speaking of Kara’s relationships, things were dicey at the end of last season between Lena Luthor and the Girl of Steel. “That is such a complicated relationship,” Benoist said, “that I’m excited to see how it fleshes out, because in a lot of ways, and a lot of sad ways, it, in essence, mirrors Lex Luthor and Clark Kent’s relationship,” but that’s Lena’s relationship to Supergirl. In Lena’s mind, she’s not too worried about that, because she still has her best friend Kara.

Yes, Lena still doesn’t know Kara’s secret. “For Lena, she’s going into season four with her best friend still the same. Nothing as changed for her,” McGrath explained. Unlike for Kara, who doesn’t know what to do with Lena’s animosity towards Supergirl, Lena still sees Kara as someone she can talk to. “The fact that relationship has been damaged doesn’t effect Lena’s day to day life like it will affect Kara’s.”

As for if or when Lena will figure out the truth, McGrath said simply that it’s “gonna break her,” but in general, going into season four, Lena feels, according to McGrath, that “she didn’t just save the day; she saved the world. She didn’t get credit for it, never does, because she’s a Luthor. But I think with that … she’s coming in and knowing that she’s more capable than people are giving her credit for, so she starts to invent technologies that she thinks are for the good of the world. But like anything in the wrong hands, what is made for good can be used for evil, and I think that is a theme that will run through her story this year.”

We’ll also see Kara butting heads some with her sister Alex, who is now head of the DEO, but they’re still sisters no matter what. Another DEO member settling into a new position will be Braniac V, a.k.a. Brainy, played by Jesse Rath, who was promoted to a series regular this year when Briany stayed on in the 21st century. “It’s like a learning curve for him being in the past,” Rath said. Not just in a technological sense, but also in a social sense working with coworkers who are a few centuries behind him.

“I butt heads with a lot of people. A lot of people don’t respond well to Brainiac when they meet him at first,” Rath went on. “He’s kind of like a walking spoiler alert,” since he’s in the past and knows what’s going to happen. “But what he’s going to come to learn is there is a difference between knowing the past and experiencing history.”

Brainy, too, will confront the anti-alien sentiment that takes hold. “It’s definitely going to be a shocking experience for him because in the 31st century, no one really cares if you’re an alien or not.” Now, Brainy is going to experience discrimination for the first time, and it won’t be easy. One thing we probably won’t be seeing is the show mirroring the comics in developing a romantic relationship between Brainiac V and Supergirl—at least, not any time soon. “She’s Supergirl; she doesn’t need a boyfriend,” Rath said.

A comic plot we will see this year? Red Son—or in this case, Red Daughter, showing a double of Kara raised in Russia. That will be more of a slow-burn story that will develop through the season, but it will examine the nature-versus-nurture debate. How a potentially not-so-nice version of Supergirl will clash with the humans who want the aliens off their planet will be very exciting to watch and was teased in the trailer the cast showed at the packed panel on Saturday afternoon of the convention.

The theme of the panel, and truly of the show, is that anyone can be a hero and that in real life, heroes are the ones that stand up for what’s right, either as role models, storytellers, or simply as compassionate human beings. “Not everybody has to have superpowers,” Katie McGrath said. We see that on screen with Alex, Jimmy, and Kara as a reporter. Supergirl is about making the choice to be a hero, and as McGrath said, “Sometimes it’s just getting up and trying.”