Supergirl Review: Kara Needs Balance as We Head Toward a “Legion of Superheroes”/Worldkillers Showdown 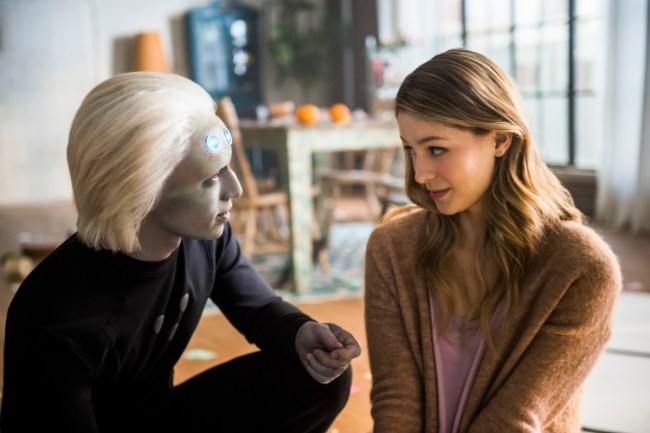 Apologies for not hitting the ground running with a Supergirl recap this week after the show returned from its hiatus. The recaps as I was doing them were getting to be a bit much. But I love this show and I love writing about it, so now I’ll just be doing straight-up reviews, getting right into the nitty-gritty. Honestly, you’ve probably already seen the episode if you’re reading this, and if you haven’t, you can find recaps anywhere else. Cool? Cool. Let’s get into S3, Episode 10: “Legion of Superheroes.”

MEET THE LEGION — Struggling to heal from her injuries inflicted by Reign (Odette Annable), Supergirl (Melissa Benoist) remains in a dreamlike state, unable to be reached. Mon-El (Chris Wood) recruits one of the Legion members, Brainiac-5 (guest star Jesse Rath), to try to bring her back. Meanwhile, Reign continues her rampage on the city so the DEO teams up with the Legion of Superheroes to try to stop her. 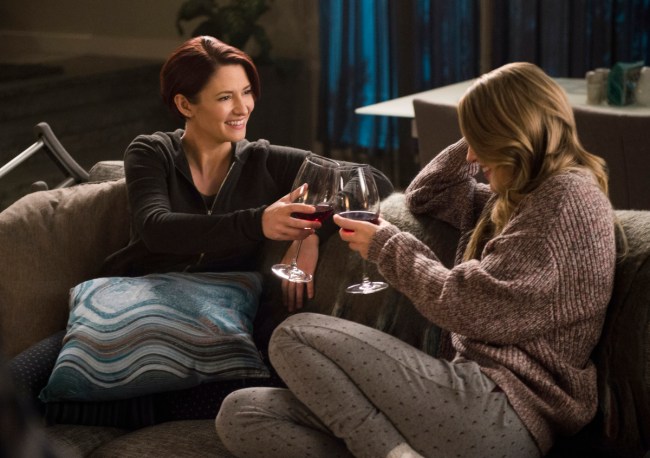 One of the things that I love about the return of Mon-El, the arrival of Imra/Saturn Girl, and the introduction of Brainiac-5 is that having the Legion of Superheroes on the show reconnects Kara to the wider universe. So much of this season has been about her attempting to first shun her human self (because feelings are hard, and apparently Kryptonians don’t have emotions? Or something?), then find her “true” self, which is Kara Danvers, apparently.

When Kara is finally revived from her coma after her brutal battle with Reign, Alex is relieved, but also blaming herself for what happened to her. Alex believes that she caused Kara’s injury by encouraging her to ditch her human side “go full alien” against Reign. What I think Kara still needs to learn, and what I think (and hope?) the show might eventually be getting at with the arrival of the Legion, is that it’s not about choosing one or the other. It’s about finding balance and strength in her Kryptonian self and the self that evolved as she grew up on Earth.

Kara Danvers is a fake name, but the identity—the woman who loves pot-stickers and cats, the woman who values the truth, the woman who has faith in people—is real. Whether she’s wearing her “S” shield or not, Kara is, and always has been, those things. Is she an alien who needed to adjust to a foreign planet? Of course, but her becoming acclimated didn’t erase who she was. She arrived on Earth with those qualities we love about her. (except maybe the thing about  loving pot-stickers, because they don’t have those on Krypton)

Kindness, hope, love, and empathy aren’t “human” qualities, they’re qualities to which anyone can and should aspire. I don’t like the idea that being alien means being cold and unfeeling, whereas empathy and emotions are the sole realm of humanity, so if you’re leaning into those, you’re “being more human.”

After all, let’s look at Imra. She’s Titanian, from another planet’s moon, and yet she’s been nothing but kind and heroic since she arrived. I understand why Mon-El would’ve fallen in love with her. She’s amazing. She and Kara are both alien, and both cut from the same cloth—kind, empathetic, powerful, heroic, and always willing to stand up for those who can’t stand up for themselves.

So, what I hope for Kara is that she realizes that she doesn’t have to throw over any of her many facets in order to be a good hero. What she needs to do is get better at getting all those facets working together in harmony. She’s always at her best when she does. 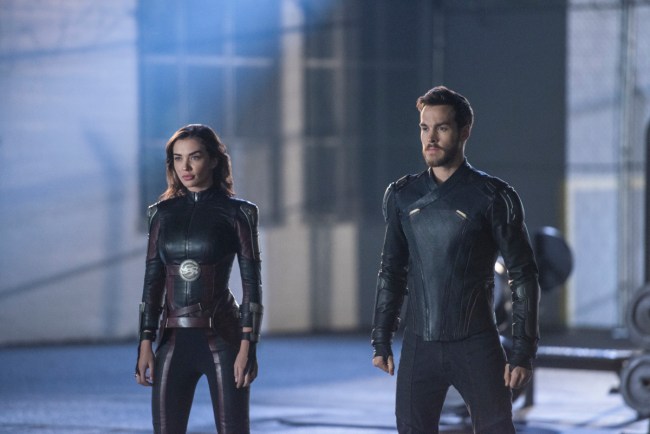 The Legion of Superheroes vs. the Worldkillers

And so, the Legion of Superheroes is here to remind her that heroism, kindness, and hope are qualities that are appreciated all over time and space. In other incarnations of Supergirl, one of my favorite parts of her story is her involvement with the Legion of Superheroes. While Kara has historically grown accustomed to life on Earth, and has grown as a person after making a home here, I always got the sense that, in her interaction with the Legion, there was a certain sense of relief.

With the Legion, she never had to feel self-conscious about her “alienness,” nor did she have to dumb-down her Kryptonian intellect or approach to anything. She was just free to be entirely herself among a group of similar young people with the common purpose of helping those who need it. With the Legion, Supergirl could truly stretch her legs.

I don’t know if the plan is for Supergirl to have any kind of long-term relationship with the Legion beyond this Reign/Worldkillers storyline, but I hope it is. Regular interaction with the Legion would help Kara hone her best self without continually feeling the need to “choose.”

And then there are the impending Worldkillers. At the end of this episode, Reign was promised that there are more like her. In the New 52 storyline from where she was taken, Reign is a Worldkiller, one of several Kryptonian-created superweapons, and a disturbing connection to Kara’s childhood home.

What’s interesting is that, throughout this Supergirl series, Kara has spent a lot of time fighting “rogue Kryptonians,” fighting against her own kind. Though already an adult, Kara has still had to learn some harsh lessons: that neither Kryptonians, nor her parents, were as upstanding and ethical as she believed; that other alien races don’t always have to be immediately suspect, even Daxumites. She’s not becoming “more human,” but she is becoming more aware of the fact that both Krypton and Earth exist as a part of the wider galaxy and universe.

A wider galaxy and universe with which she will need to interact.

Yes, she will fight to defend her new home, but she’ll need to ally herself with other aliens in order to do that. First, it was Martian Manhunter, then it was Mon-El, now it’s the Legion of Superheroes. These are her first steps into a wider world. Or, rather, a wider universe. 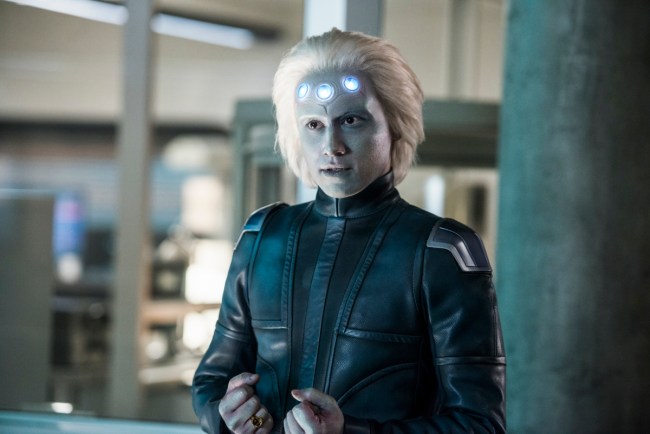 All You Need Is Love?

And then, of course, there’s the budding love story between Lena and James.  I’ve always dug it, both because I enjoy the portrayals of these characters by Katie McGrath and Mehcad Brooks and think they work well together, and because it presents an interesting thematic conundrum. James is Superman’s best friend, and he’s now dating the sister of his best friend’s nemesis. Granted, Lena is amazing, and nothing like her brother, but that will likely be something that is an undercurrent throughout their relationship.

Couple that with Lena’s constantly needing to prove she’s “not a Luthor,” and it should provide some interesting turbulence in their relationship indeed. Of all the pairings on this show, this one has the potential to be the most interesting, because of who the characters are, and what they mean to Supergirl/Superman mythology.

Especially if we actually get Lois Lane on the scene!

But there’s the possibility of another love story on the horizon:

Braniac 5 is one of Supergirl’s most intriguing love interests, and the things that makes him that are the same things that make the Legion so appealing on this show. Of all the Legion members, Brainiac 5 is generally the one who makes Kara feel the most herself. He allows her to be as strong, and as intelligent as she is without holding her back in any way, and that’s hugely empowering for her.

Also, like Jimmy, if Kara gets involved with Brainiac 5 on the show, the way she does in other media, she could play in the same territory as James and Lena, as she’d also be dating someone related to one of her cousin’s famed nemeses.

I didn’t pick up on the slightest hint of a romantic vibe between them in this episode, though he is the one that helps her through her trauma (until she can ultimately help herself), and connects with her in a way no one else can. While I’d be perfectly happy if Kara stayed single for a good long while, I also wouldn’t mind seeing more of her and Brainiac 5 together.

Overall, I love the place that this week’s episode of Supergirl has brought us to, and I’m looking forward to the inevitable showdown between the Legion and the Worldkillers. Hopefully, Kara will have her Earthling/alien balance worked out by then.

What did you think of this week’s episode? Sound off in the comments below!

Supergirl airs Mondays at 8PM ET/PT until February 5th, when it will go on hiatus again until April 16th in the same time slot on The CW.