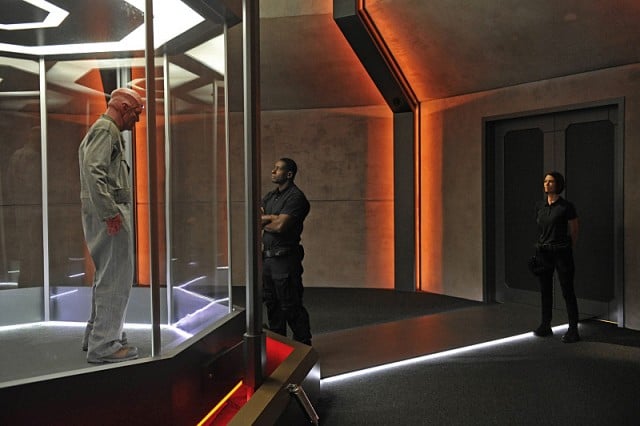 In this week’s episode of Supergirl, “Human For a Day,” there’s a pretty big reveal (that wasn’t a reveal to some of you smarty-pantses out there, but STILL) that was kind of a game-changer for the rest of the series. Now, in a recent interview, the cast of CBS’ Supergirl talk about where the show goes from here.

**ABANDON HOPE OF STAYING SPOILER-FREE ALL YE WHO ENTER HERE**

In an interview with Collider, the cast and crew talked about the future of the series (including some fun moments we can expect soon!), as well as provided some insights into where their characters are right now, and where they’re likely going.

If you saw “Human For a Day,” you know that Hank Henshaw (played by David Harewood) is actually the shape-shifting alien, J’onn J’onzz, aka Martian Manhunter. He revealed himself to Alex in a pretty amazing scene, but he very specifically told her to not “tell anyone, not even Kara.” Knowing their relationship, I figured that wouldn’t last long, and Melissa Benoist confirmed that Kara does find out:

It’s so funny the way she reacts. I can’t wait for you guys to see it. I don’t want to tell you because it’s really funny. It’s a good thing; she’s really happy about it.

Benoist also talked about what we can expect upon the arrival of a new love interest for Kara, Adam Foster (played by Benoist’s real-life husband, and former Glee co-star, Blake Jenner):

Her love life is so complicated. All of her relationships are so complicated. By the time that he shows up a lot has happened with the other men in her life. I like to think that, sometimes, the better Supergirl gets at her job, Kara’s personal life kind of suffers. You can’t juggle everything and be good at everything all at once. When she meets Adam that’s definitely the wrench in the machine of her life, in terms of CatCo.

Meanwhile, Mehcad Brooks (like the Eleventh Doctor) thinks bow ties are cool. So, will we be seeing a bowtie-wearing James Olsen ever?

However, gadgets look good on everyone, and thankfully, James will get a bunch of those to play with moving forward:

There’s more gadgets. I’m a tech guy myself sometimes, but some of this stuff is, like, covert operation, government stuff. So, like, there are different things that come from the DEO. Or Kryptonian technology that James gets his hands on. It’s kind of interesting.

David Harewood had a lot to reveal about what we can expect from Martian Manhunter – and he finally gets to talk about it!

And Chyler Leigh, who plays Alex, had a lot to say about J’onn J’onzz, and how her character’s relationship to him will evolve as the show goes on:

It definitely adds a lot of layers to the relationship between them. You start to see that he looks at her almost as if she’s one of his daughters, one of his children. You learn that he had daughters and that in a huge war his family was basically eradicated, taken out. So there’s so many wonderful moments between the two of them where that kind of stuff comes out, where he talks about ‘You’re very much like my daughter.’

And lastly, Jeremy Jordan talks about how he doesn’t think Winn is creepy in his feelings for Kara (I disagree, Sir. He is extremely Nice Guy Creepy), and where he thinks Winn is headed, especially given who his father is:

I think it’s just genuine. I think that Kara is smart enough and observant enough to not become best friends with a creepy dude. And also Winn, I think, is very sort of respectful and he gives his distance and I think he’s too scared to say anything.

I think as we know Winn now and how he is, it’s gonna take a lot for him to go there. At this point, as far as we know, as far as I know about him, there’s not really that darkness in him. At least not that we’ve seen. Maybe it’s deep below the service. It’s clearly in his blood. I don’t know. I don’t want to say that Winn’s going to suddenly become this giant supervillain, I think that would make just no sense whatsoever. I can’t really rule it out because I don’t know what the big plans are for the whole series.

In the interview, Jordan also mentioned that Winn and Maxwell Lord may be interacting at some point soon. Hmmm.

For more tidbits from the set of Supergirl, as well as interviews with the show’s creators, check out the full interview over at Collider.