Super Mario Galaxy Meta-Review: It Stands on its Own, and Much More 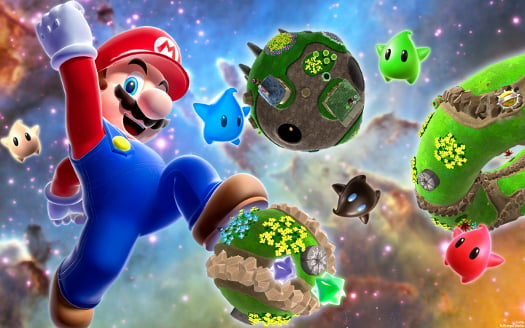 Super Mario Galaxy 2 will be released on Sunday (or midnight on Saturday if you’re near Rockefeller Center in New York City and want to wait on line for a bit), but the gaming media has had it for some time now. Well, the NDAs are up, and the reviews are in.  There have been some worries that this Mario game would be superfluous, unnecessary — simply Super Mario Galaxy with more levels. This is the first time Nintendo has released two traditional Mario games on one console in 20 years.

Fortunately, according to some of the top publications in gaming journalism, Super Mario Galaxy 2 stands on its own, and much more.

1UP says that the game manages to introduce some really fascinating new features: Cloud Mario, Rock Mario, and of course Yoshi. But at the same time, “this sequel to Super Mario Galaxy takes everything its predecessor did and maintains that urgent sense of wonder and discovery, creating a world that copies its past self, yet keeps the freshness that made it so exciting when the first game debuted two years ago.”

Joystiq agrees. “One thing is clear: SMG2 is its own game.” But they go even further: Nelson writes that “Super Mario Galaxy 2 is the best Mario game ever. There, I said it.” He adds that although the game features many helping hands for the casual or the beginner, “It features enough challenges to keep the most hardcore Mario player engaged for weeks.”

Kotaku’s Totilo was of the opinion that there is much about the game that players who are just now coming to Mario games will not understand.  However, this doesn’t manifest itself in difficult gameplay: Instead the game sews references, secrets, and in-jokes in to tickle the nostalgia gland of longtime fans.

“Early in your romp around the planets and galaxies of Super Mario Galaxy 2, you will find that Nintendo is talking to you. They know you don’t expect this planet to be hollow and full of coins or that level to suddenly flip on its side. You are playing their game while they are playing you. That’s the spirit of this sequel, which feels like a Mario made for the Mario veterans.”

Wired was a bit disappointed that the mildly expanded story of Super Mario Galaxy didn’t make it into the sequel.

“Galaxy showed that the Mario team has some genuinely solid storytelling ability, and they implemented it in a way that didn’t distract from the gameplay. Even this was apparently too much for Miyamoto, who told the team to strip the narrative down to the absolute bare minimum for this installment. Again, this was done with the intent of keeping things laser-focused on the gameplay. But in this case it feels like a waste of talent.”

We understand where Chirs Kohler is coming from: we’d love to see better storytelling in games.  But one really must make an exception for Mario.

The sense of surprise in many reviews is best summed up by IGN’s review:

“Super Mario Galaxy 2 wholly exceeded my expectations. Leading up to the game’s release I hadn’t expected much more than simply ‘more of the same.’ I loved the original Super Mario Galaxy, but the company would have to do something pretty special to really ‘wow’ me.  Consider me ‘wowed.'”