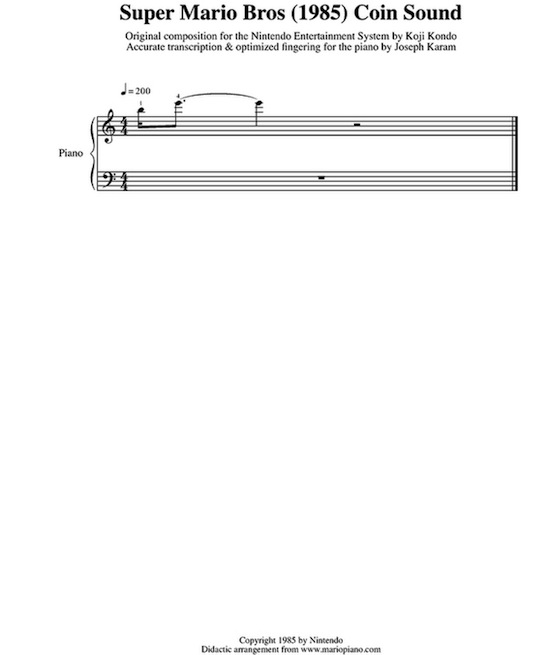 Simple as it might look, the above sheet music is part of a painstaking project by Joseph Karam to transcribe what he says is a faithful transcription of Koji Kondo‘s score to the original Super Mario Bros.

[Another accurate transcription of the Super Mario Bros. music] was apparently too much to ask, however, so I pulled out my professional engraving software and embarked on a meticulous and uncompromising transcription project that involved (i) transcribing every pitch and rhythm while listening to the original 8-bit NES recordings hundreds of times, voice by voice, note by note, in a loop, (ii) rigorously cross-checking my work with several of the best transcription attempts out there, (iii) arranging the visual layout and pagination for clear readability, and (iv) optimizing the piano fingering by learning the pieces myself and playing them every day for several months.

All this hard work has paid off, and today, as a tribute to the man who changed the face of video game music forever, I can proudly present to you a superior, premium, deluxe sheet music transcription of Koji Kondo’s original Super Mario Bros compositions from 1985, along with the corresponding midi sound files.

Because you know you have to hear it now:

(Note that this is the sound from the game, not a piano performance of the sheet music.)