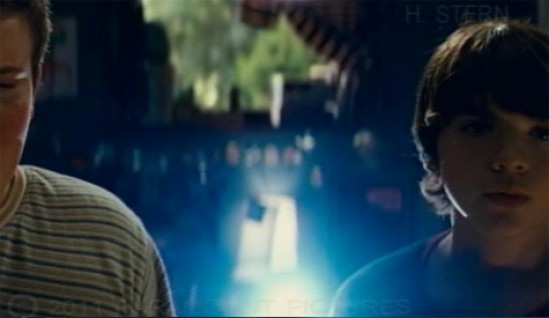 The fact that a high quality screener of Super 8 has been released to the piracy community isn’t a surprise, as screeners being released to the Internet wilds tends to happen quite frequently; however, a new high quality screener for the movie has been released with an interesting watermark that reads ” H Stern.” The watermark running across the bottom of the screen, pictured in the screenshot from the screener above, displays the date and that the screener is property of Paramount Pictures — standard practice for screeners. The weird thing is that the “H Stern” watermark, which is sitting in the top right corner, stays on screen for the length of the entire movie, something a bit out of the ordinary for screeners.

The first theory regarding the odd watermark is that the studio gave this copy to Howard Stern (or someone else named H Stern with enough cred to obtain a legitimate studio screener). The second theory is that a P2P group that obtained a copy of the screener placed the “H Stern” watermark into the film in order to cause a stir. Though at first the second theory seems likely, this sort of thing generally doesn’t happen in the P2P movie release scene, and furthermore, if a copy of the screener without the “H Stern” watermark existed, it would probably turn up pretty quickly, lending credence to the notion that this watermarked copy might be the legitimate one.

The above tweet came from Howard Stern’s stylist, Ralph Cirella, acknowledging and promptly denying that he had anything to do with the leak. Come Monday, Stern may address the issue and we’ll find out what the deal is.