This is why we need to #MakeItFair 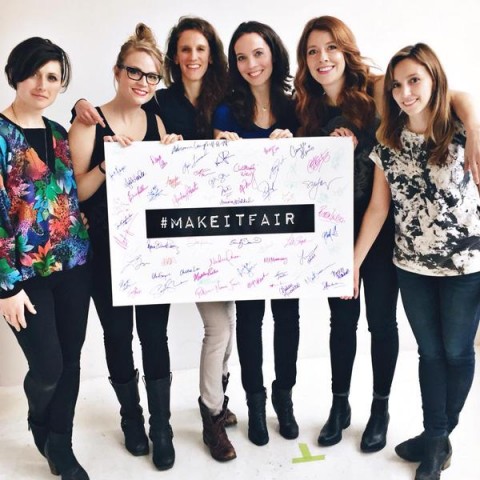 Lest you thought we were making it up, there actually is a reason for stuff like the #MakeItFair video. The Sundance Institute and Women in Film recently released a three-year study of the marketplace for female directors, and they found that women are more likely to work in independent film than in mainstream film, when they work at all, because of the still-lingering belief that films directed by women have a smaller audience than films directed by men. WHO THE HELL ARE THEY TALKING TO, AND WHAT ARE THE PEOPLE SURVEYED BASING THIS ON?! *sigh*

Thanks to Variety, we’ve got some of the study’s key findings broken down in manageable nuggets:

Among the results of the survey of 39 men and 20 women in the film biz:

That’s the interesting thing. They’re not talking to audiences in this study. This is about the biases of people in the industry. That means that:

1) They surveyed fewer women than men, because there are fewer women in the industry (whassup, self-fulfilling prophecy!), and

2) They’re presuming to speak for an audience to whom they dictate tastes.

I think this chicken came before the egg. I think that a predominantly male industry thinks of itself when it thinks of “audience,” and so – never mind that there are more women on the planet, so catering to the majority might make some damn sense – men in the film industry make things they want to see. They see themselves as “most people” because when they look around at each other and they’re all they see, that decision makes sense. Then they flood mainstream film with Things They Like, and when people spend money on it – because these are the only films most people have immediate access to – they’re able to say, See? THIS is what makes MONEY! This is a BUSINESS DECISION.

What’s more, the fact that they conflate genre with gender really irritates the living bejeezus out of me. But that’s a conversation for another day.