I was really excited for Suffragette. I teared up at the trailer, and I squealed about it to friends — but with Meryl Streep rejecting the word feminist in favor of “humanist,” and this campaign with a quote from Emmeline Pankhurst, “I’d rather be a rebel than a slave,” my excitement has significantly diminished.

There are arguments about the use of the word “slave” in this context. While I personally subscribe to the idea that “slave” and “slavery” should not be used outside of referring to the structural violence of treating the body of another as commodity, I’m more frustrated here by the ways in which Suffragette seems to reproduce the same lack of intersectionality that was present in Pankhurst’s time.

To look more into the history, it’s important to note that British feminism is heavily rooted in abolition movements, and it was through female activism in anti-slavery that British women first started entering the public sphere. However, despite the crucial role these women played in the abolition movement, they had some clear blind spots that Streep and the stars of Suffragette seem to share.

To get an idea of that history, this famous Wedgwood engraving, introduced by Elizabeth Margaret Chandler, and its male counterpart (“Am I Not A Man And A Brother?”) was used in dishes, hairpins, and many other items for creating a political space that called for abolition. Now, look at this second version: 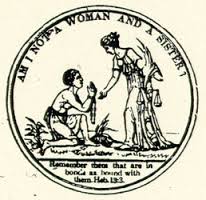 These engravings illustrate a clear power dynamic in which the black subject has to declare and prove not only her humanity, but also her womanhood. In addition, the “sister” holds not only religious connotations, but also implies a freedom dependent upon both a connection with the white woman and the white woman’s validation. Simply put, freedom for the enslaved woman is not the same as freedom for the white, British woman. It was defined differently, and relied on different conditions. It seems very obvious, or it should be obvious, that enslaved women dealt with oppression and sexism very differently. You don’t need to pick up The History of Mary Prince to know that, but maybe we should send the Suffragette actresses a copy.

For Pankhurst or Streep to call themselves slaves is incredibly tone-deaf to this history. The feminist language of Pankhurst’s time had a troubling tendency to appropriate the language of slavery. As another example, look at Charlotte Brontë’s Jane Eyre, a narrative with themes of female empowerment that features a protagonist whose voice uses elements of the slave narrative. White women did not experience slavery, and their use of the word “slave” is incredibly offensive to those who were enslaved.

The tough thing about intersectionality is that you feel like you’re stuck in this weird liminal state of having to always add a qualifier, or asterisk to feminist movements and campaigns. While I might defend Suffragette against gendered insults that call it “unnecessary” and “overreacting,” I can’t defend these shirts.

Just because you’re making a film about historical events doesn’t mean you can’t introduce a newer perspective. It’s unfortunate that instead of seeing this historical film as an opportunity to address these matters and start a dialogue, the people involved with Suffragette chose instead to reproduce them.