The Subversive Power of an LGBTQ+ Happy Ending Things seem dark enough lately that it feels like you’re going to choke on it. From people ignoring warnings of the dangers of public health hazards to how people of color are ruthlessly killed by the police to everything Donald Trump is doing, it feels hopeless. Right now, the emotions filling many of us are anger, despair, and frustration at a system that just won’t change and refuses to—that we have to fight tooth and nail to get people to even do the halfway decent thing.

It’s hard, but we keep fighting because it’s the right thing to do. In a world that is drowning in tragedies, we need stories with something resembling a happy ending more than ever—those stories where, despite struggle and heartache, everyone ends up alive and better than they were before. For the LGBTQ+ community, those stories in media have been few and far between for many years.

“Bury Your Gays” is a long-held trope for a reason. From the story of Achilles and Patroclus in The Iliad to Clarke and Lexa in The 100, tragedy just follows anyone with even a coded LGBTQ+ love story. In recent years, however, there’s been a change in having something resembling a happy ending for LGBTQ+ couples in fiction. It’s not perfect, and there’s still a notable lack of those happy endings befalling LGBTQ+ people of color, but it’s a step forward.

More importantly, it’s a step we need right now. Hollywood is too preoccupied with tragedy and drama. The worse things get, apparently, the better the story is. But is that really true? There’s something to be said about drama and the like, but there is power in happy endings. There’s just something about seeing everything end and end well, despite the struggle and the heartache.

Look at Schitt’s Creek, which ended its sixth season run with a wedding between David Rose (Daniel Levy) and Patrick Brewer (Noah Reid). The couple marries both in a better and happier place then when they entered the series. Patrick and David get to live a cottage that gives you The Holiday vibes. The pair chooses a quiet life together, enjoys each other’s company, and has gotten married. It’s the millennial dream, practically!

Or how about when Ngozi Ukazu’s wonderful webcomic Check Please! ended? Eric “Bitty” Bittle starts the series as a freshman, terrified of coming out to his bro hockey teammates, and with a lifetime of baggage of people in the closet in small town USA. He ends the series as the first out NCAA Division I captain of a hockey team, in a happy relationship with the first out NHL hockey player, and with a book deal. Or how about when Catra and Adora actually got together in the final season of Netflix’s She-Ra and the Princesses of Power? When they both admitted to wanting a happy ending with each other and worked through their issues (and save the world) to make sure that they got it? When, despite being enemies for most of the series, what they really wanted was a loving relationship with each other?

Or when Harley and Ivy kissed on DC Universe’s animated Harley Quinn series? Yes, there is still more series there, but seeing Harley, a victim of abuse, get to that emotional point? It’s great. It’s powerful. It’s amazing to watch.

For so long in culture, hearing any sort of LGBTQ+ story meant tragedy over joy, sorrow over happiness, heartache over love. For many out there, fighting the good fight, demanding their stories be heard, the tragedy doesn’t go away, but that doesn’t mean that our entertainment should always reflect that. Some stories should tell of the world that we would like to live in—a world where everything may be okay.

Schitt’s Creek, Check Please!, and She-Ra and the Princesses of Power are just some of many that could show a power in seeing LGBTQ+ characters get a happy ending. More importantly, these series show that a happy ending is something earned. Joy and love is something that can be found, despite the heartache. 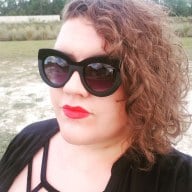