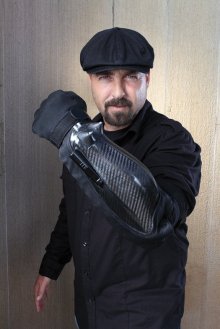 The BodyGuard, designed by cameraman David Brown, is an armored glove equipped with a high voltage stun gun, laser pointer for aiming, video camera and flashlight. Brown developed the concept for the BodyGuard — which is designed to prevent violent situations rather than end them — one night in 2004 when he and a few of his friends were discussing a recent mountain lion that attacked some cyclists, leaving one dead and the other maimed.

When using a knife, gun, or other handheld weapon, Brown felt the item could be easily dropped, thus leaving the wielder unable to protect his or herself. So, he came up with the glove concept because he felt it would be more difficult to lose the weapon, but also because using one’s own hand was much more instinctual than using a foreign object.

The glove weighs less than three pounds, is made of breathable material and has a hard, protective shell that extends up the arm. The stun is generated by four electrodes on the wrist-area of the glove, prepped by a pull pin, and is activated by a button on the palm, with similar buttons activating the laser pointer, flashlight and video camera. Brown developed the prototype for the BodyGuard in 48 hours, by using a medical arm brace as a base, attaching a stun gun and a fire-alarm button from Home Depot. It took Brown seven years and thirty prototypes to finish his final demo model. Though the BodyGuard seems like a neat futuristic piece of weaponry, one wonders exactly how effective it’ll be when facing criminals with ranged weapons.