It’s not news that Homeland has faced criticism for for perpetuating negative stereotypes of Muslims and Arabs, as well as its inaccuracy with regard to the terrorists depicted on the show. Well, three Arab street artists that were employed for “authenticity” to create graffiti on a Syrian refugee camp set decided to use the opportunity to make a statement, and the fact that they got away with it pretty much shines a spotlight on the show’s race problem.

The artists, Heba Amin, Caram Kapp and Stone, were informed by a German street artist friend who had extensive knowledge of the Middle Eastern street art scene that the Homeland production team, who were shooting in Berlin, were looking for “Arabian street artists” to lend authenticity to a scene set in a Syrian refugee camp at the Syria/Lebanon border. The artists were hesitant at first, knowing about the show’s racist reputation. However, they seized the opportunity, and proceeded to – completely unbeknownst to the Homeland production team – write their messages of protest into the graffiti on the set. (Translations via the artists’ statement.) 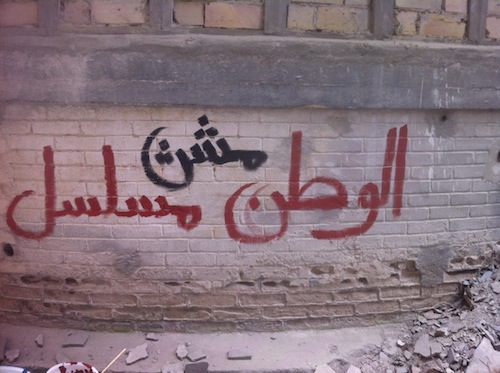 Translation: Homeland is NOT a series (al watan mesh mosalsal) 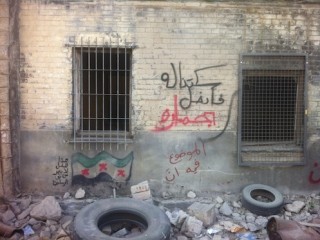 Translation: Top: we didn’t resist, so he conquered us riding on a donkey; Bottom: The situation is not to be trusted; Left: This show does not represent the views of the artists 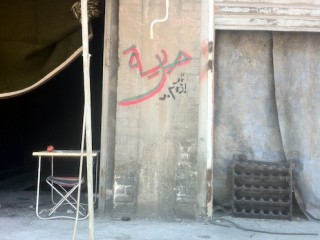 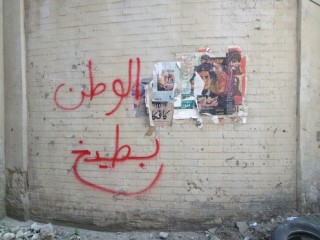 Translation: Homeland is watermelon (al watan bateekh) (watermelon is a word often used to indicate that something is a sham or not to be taken seriously) 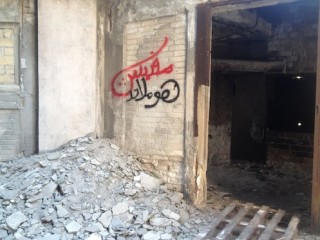 Translation: There is no Homeland (mafeesh Homeland) 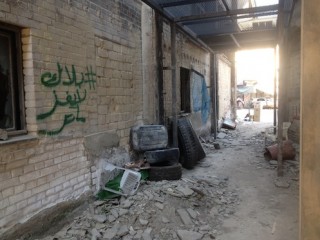 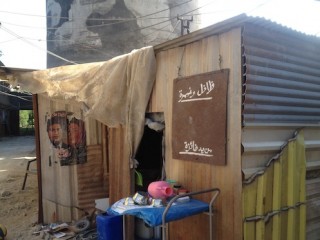 Translation: Falafel and Alcohol: from the hands of Faiza 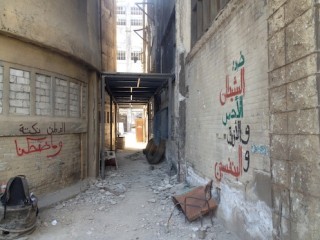 Translation: Right: against the red, blue and purple devil (A Muslim Brotherhood reference made by an Egyptian general on Television in 2013); Left: Homeland is a joke, and it didn’t make us laugh 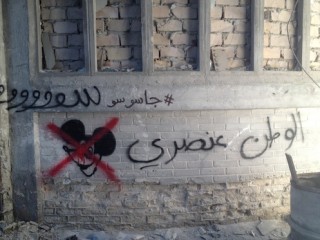 Translation: Homeland is racist; #gasewsew (a reference to the Egyptian Abla Fahita puppet on spying)

According to a statement released by the artists, here’s how it went down:

In our initial meeting, we were given a set of images of pro-Assad graffiti- apparently natural in a Syrian refugee camp. Our instructions were: (1) the graffiti has to be apolitical (2) you cannot copy the images because of copyright infringement (3) writing “Mohamed is the greatest, is okay of course”. We would arm ourselves with slogans, with proverbs allowing for critical interpretation, and, if the chance presented itself, blatant criticism directed at the show. And so, it came to be.

The set decoration had to be completed in two days, for filming on the third. Set designers were too frantic to pay any attention to us; they were busy constructing a hyper-realistic set that addressed everything from the plastic laundry pins to the frayed edges of outdoor plastic curtains. It looked very Middle Eastern and the summer sun and heat helped heighten that illusion. The content of what was written on the walls, however, was of no concern. In their eyes, Arabic script is merely a supplementary visual that completes the horror-fantasy of the Middle East, a poster image dehumanizing an entire region to human-less figures in black burkas and moreover, this season, to refugees.

According to Deadline Hollywood, Homeland creator and Executive Producer, Alex Ganza, had this to say about the graffiti:

We wish we’d caught these images before they made it to air. However, as Homeland always strives to be subversive in its own right and a stimulus for conversation, we can’t help but admire this act of artistic sabotage.

So…in five seasons of this show, do they not have anyone on set who reads Arabic? They “cared enough” to seek out artists from the Middle East in the name of authenticity, but then gave them instructions about what graffiti they should create and didn’t even bother to check in with them on the work they’ve done afterward? Why even bother seeking these artists out, if that’s the case? If they cared so little for the finished project, why not just hire an intern, give them a copy of the Arabic alphabet, and have them draw approximations of graffiti on the walls?

I haven’t watched Homeland since the beginning of Season 3, and was turned off when the then-new Muslim CIA analyst character, Fara, was introduced, only to be yelled at by Mandy Patinkin’s Saul for having the nerve to wear a headscarf to work. While that may be well within character for Saul, the show itself framed that moment as if he had a point, and Fara barely defended herself. Now, I’ve heard that, since then, Fara has become a character that American Muslims have been proud of, and that she’s been great representation on the show, which is awesome. But the fact remains that one positive character means less when you surround her with stereotypes and single her out as “one of the good ones.”

Now, Carrie has always been the worst from the beginning (and Claire Danes’ performance is off the hook), but she’s the protagonist, which means that we’re always supposed to sympathize with her on some level.

Kudos to Amin, Kapp, and Stone for their brave work. We hope you know that there are plenty of us in the United States who also see the problems with Homeland, and in other media, and are fighting to do something about them.