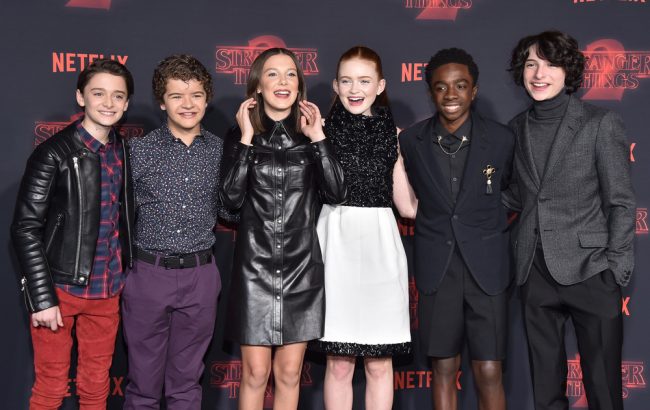 Over the weekend, a Stranger Things fan posted a video to Twitter in which he criticized Finn Wolfhard (who plays Mike) for refusing to stop for a picture. The video shows the fan waiting outside of Wolfhard’s hotel, calling to the actor as he leaves and again as he returns, presumably the same night. The caption for the video reads, “Imagine being 14 and heartless that you can’t even stop for your fans who made you famous in the first place! WOW.”

That is a horrible way to react to this situation, for reasons Shannon “Barb” Purser was quick to point out as she jumped in to defend her former co-star.

Okay, no. No actor is under any obligation to stop for anyone. Finn is an incredibly kind human. But he's human and he needs breaks too. https://t.co/b4Lfrl1wU3

In addition to being human, Wolfhard is fourteen. A child. A child who’s working a full-time job.

I experience this on a significantly smaller scale, obviously, but I’ve had people waiting for me in hotel lobbies, at my airport gate, etc.

And I’m an adult. I can’t imagine being inundated with all this attention at his age. It’s intimidating.

So, from one big sister to the world, don’t you DARE make young actors feel guilty or indebted to you because they couldn’t say hi.

They give you their art. They love their fans. Don’t take advantage of that. And if you can’t handle them needing space, stay away.

It would be truly fantastic if we could stop needing to have this conversation. As fans, we are in no way entitled to any part of actors that they do not choose to share with us. The price of fame is not full access and availability at all times for whatever purpose any random person demands, especially not–and again, I can’t believe this actually has to be stated this explicitly–WHEN THE PERSON WE’RE TALKING ABOUT IS A CHILD.

It doesn’t matter if they are an actor… they are kids first. Give them the space they need in order to grow without feeling like they owe

Anyone anything for living their childhood dreams

And while we’re on the subject of ways we should 100% not be talking about these children, let’s add this to the list:

This isn’t just limited to a few frenzied fans. Paparazzi and some reporters would also do well to remember that these are children.

The paparazzi need to leave the cast of stranger things alone, they are going to literally ruin these kids lives just to make a quick buck

These are humans. They are actors, meaning they produce work for us to consume and no part of their job permits fans to make demands on them personally. And please let’s not forget: