Some doors can’t be closed. #StrangerThings2 arrives on October 27. pic.twitter.com/NALL5HQalg

Netflix’s retro, sci-fi series Stranger Things is finally coming back this fall. After an ending that left us questioning what happened to our favorite characters and whether our heroes were truly free of the Upside Down, the trailers and teasers all point to a resounding and loud no. “Some doors can’t be closed,” writes a teaser, and it seems like the simples residents of Hawkins just can’t get a break.

The year is 1984, which means all kinds of new pop-culture references as the gang takes on a completely new, even stranger monster. If you thought the Demogorgon was terrifying, check out the scale of the new monster in the poster below. Like the Demogorgon, the creature appears to also be somewhat faceless (though there is a fair amount of smoke), but has lots of spider-like limbs.

What’s its name? Does it also come from the Upside Down? Why does a storm follow it? Why is the corner of the storm blue, instead of overwhelmingly red? We’ll just have to wait and see. Still, while the Demogorgon was a stealthier, hidden danger it seems like this new creature is out in the open and ready to release its wrath on the town. (Unless, they’re in the Upside Down. Are they in the Upside Down?)

The Duffer brothers have cited Temple of Doom, Aliens, and Terminator 2 as influences for the second season. All I can think of is the gigantic spider from Denis Villaneuve’s Enemy, but the poster does a great job of obscuring the monster’s full presence. After all, the Demogorgon, like most monsters, are most frightening before they’re revealed.

Also, whoever is designing these posters has an amazing sense of ’80s media. The first season poster looked like it could be a Hardy Boys book cover that perfectly accompanied the classic, pulpy font of the title sequence. This one is just as nostalgic, and feels like something I could’ve easily pulled off the shelves at my local library as a kid. The poster includes this timeline of the events of season 1:

1983, November 8 – The vanishing of Barbara Holland 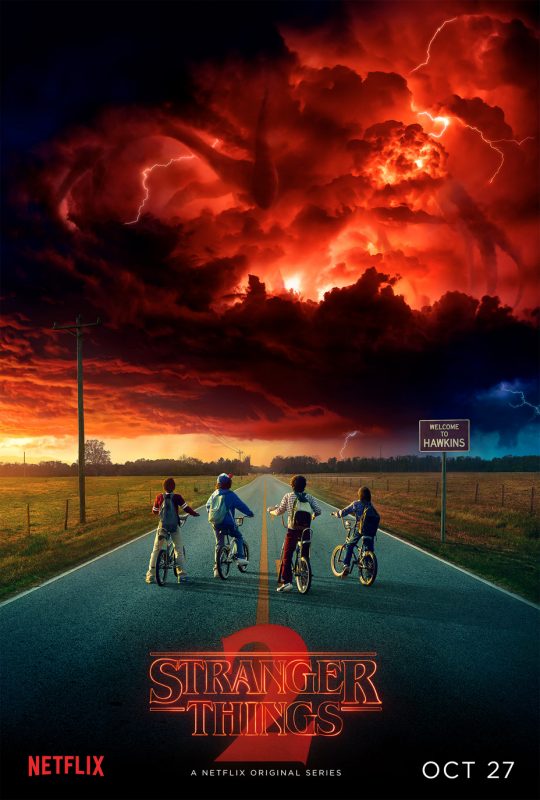 The new season comes to Netflix October 27th, which we already guessed from the Halloween references in the trailer. Just in time for some last-minute costume ideas.

Are you looking forward to season 2?