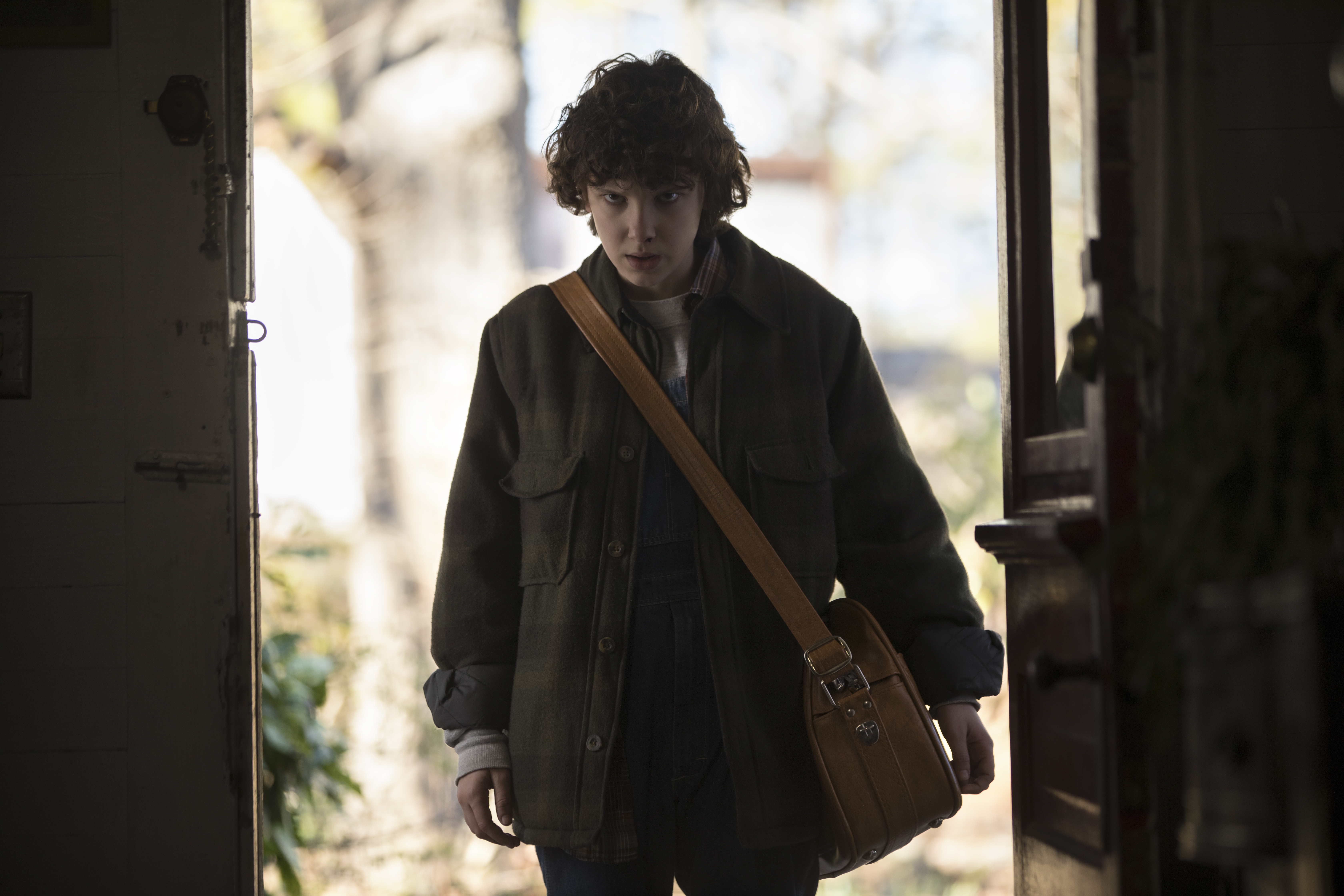 This is the spoiler-heavy part of my kick-off Stranger Things 2 coverage, where we can discuss all the meaningful, spoiler-ful developments and character arcs that we don’t want to ruin for anyone who hasn’t watched yet. I’ve broken it up into a few of the specific spoiler-y elements I wanted to discuss.

For the spoiler-free review, head here instead.

This is the most inventive, and therefore almost inevitably the most divisive, episode of the season. It takes Eleven/Jane out of the rural world she’s known and drops her into an anarchic, murderous punk group in Chicago. The show’s depiction of ’80s Chicago and punk aesthetics was… not subtle, but I did love that moment when Eleven/Jane stepped off the bus and realized the world was so much busier and more diverse than she’d ever imagined.

This episode also introduces a second MK Ultra baby, Kali. Beautiful murderous Kali has the most obvious name, but I appreciated her addition to the Stranger Things canon. Lord knows the show needs more characters of color, and Kali’s distinct psychic powers and personal crusade expand the show’s mythology. How did she escape? Why was her experience so different from Eleven’s? While I was ambivalent about the episode overall, I was definitely left wanting to know more about Kali.

However, in terms of what this episode accomplished for Eleven/Jane, it didn’t quite ring true for me. On the surface, Kali teaches Eleven/Jane to harness her anger, embracing it rather than burying it, and gives her the training that makes it possible for her to seal the gate in the final episode. However, Eleven’s never had a problem unleashing her anger; it’s controlling it, rather than letting it control her, that’s eluded her. In their quick scenes, Kali and Eleven/Jane don’t really do the emotional work required to make that breakthrough.

CAN WE NOT. These moments were small, and Eleven/Jane is admittedly prickly as hell with people she doesn’t know, but it felt retro in all the wrong ways. I am in no mood to watch a show where they pit the two girl characters against each other over some misguided boy jealousy. Nobody wants to watch a competition over who’s queen of Cool Girl Mountain. Dear Stranger Things: as you’re writing Season Three, just don’t.

Lucas is always the doubting Thomas of the party: asking questions, protesting, and raising practical concerns. So I loved to see him find another grump to bond with. Max’s scenes with Lucas were often her best, allowing her to show a mix of vulnerability, rough edges, and humor that made her feel more rounded and human. Once Lucas is honest with Max about what happened, and once she makes it clear with her stubbornness and her demands that she isn’t anybody’s manic pixie nerd girl, I really enjoyed their blooming relationship.

However, the weird jokiness around Lucas being a “stalker” was, shall we say, questionable. I get that awkward teenagers are a part of the ’80s tropes that Stranger Things plays with, and I appreciated that Max at least called the boys out for being creepers. But we really shouldn’t fall into the old “nerd stalks girl because he loves her” bit. That’s some toxic nonsense, and I wish they’d edited it out of the script.

This was the pairing that perhaps most surprised me in how much it affected me. Hopper’s struggles to be a good parent, when he’s so used to focusing solely on his job, felt realistic and painful. It’d be tempting to make this twee, but instead the show leans into how difficult things are for both him and Eleven/Jane.

Their furious, full-blown argument is genuinely scary. Eleven is a frightening kid to raise, because she’s not only super-powered but constantly in survival mode, reading tyranny and dishonesty into any restrictions placed upon her. Like a kid, she craves and demands perfection from any parental figure – but parents are people, and they’re never going to be perfect.

Hopper, meanwhile, is supposed be the adult in the situation and fails catastrophically, losing his temper at her brattiness and losing his composure in the face of her power. When he screams at her in a full-blown fury, you absolutely understand why Eleven/Jane shuts him out.

After this blowout and his radio apology, their reunion “I’ve been stupid” conversation felt particularly touching for me. Unlike Papa, Hopper admits his faults to Eleven and apologizes – and once he’s willing to be open with her, she can be open with him.

Steve Harrington’s characterization is a series highlight for me. He combines the fundamental petulance of an entitled teenage boy with the fundamental decency of the man he’s growing up to be. Steve is someone whose instincts often push him to be shitty, particularly when it comes to Nancy or shirking responsibility – but when he takes a second to reflect, he also shows a real willingness to pitch in and look outside himself. This is what the growth out of immaturity and into maturity looks like, and it’s cool to watch a character go through it.

Nowhere is this better epitomized than in his attitude toward the younger kids in Season Two. As Steve himself says, “I may be a pretty shitty boyfriend, but turns out I’m actually a pretty damn good babysitter.” With kids who are younger and needier than he is, he doesn’t exploit the power dynamic and bully or dominate. He protects them, advises them, and helps them. It’s genuinely sweet, and it’s a dynamic which also lets Dustin’s enthusiasm and friendliness shine. This was one of my more surprising and favorite developments in the season.

Poor Bob the Brain. Bob was very clearly the “guy who’s gone by season’s end” character, but I did enjoy him. His much-teased corniness seemed to come from a place of caring and nurturing, and his pep talk with Will in the car was quite touching (if disastrous in effect). While the series constantly pointed to his and Joyce’s incompatibility – “I don’t get what she sees in him” – it was easy for the viewer to see why mother bear Joyce would be attracted to someone who’s also such a giver and a carer. Joyce puts the people she loves first, and Bob does the same.

I knew Bob was a goner once the “superhero” lines started cropping up, and alas, he did go. I’m not sure what to make of the filming choices for this death scene. It was pretty horrific, the way they zoomed in on the demodogs feasting on him, with his hand twitching for Joyce as she was pulled toward the door. I suppose part of it was a desire to establish him as definitely dead for the fandom, but it was still unsettling.

NANCY AND JONATHAN, SPIES AGAINST THE MAN

Personally, I am not that invested in the Nancy-Jonathan-Steve triangle. I like that Nancy gets to be so multi-dimensional: discovering new and rebellious strength in herself when it’s time to seek justice for her friend, but also discovering new and unsettling cowardice in herself when it’s time to officially break up with Steve. In her role in this love triangle, Nancy isn’t always the “good” or “selfless” girl – and I like that she’s given that space, just like Steve, to be a shitty and weak teenager sometimes as she matures.

But I just found her and Jonathan’s relationship cute, rather than compelling. The show tries to hammer home how compatible they are and how obvious their chemistry is, but… Eh. If you have to tell me that, it’s probably not so obvious. Their attraction was certainly sweet, and subtle, but I just wasn’t that invested in it. Your mileage may vary.

(As for this plot itself, the idea that Nancy somehow snuck a tape recorder into Hawkins Lab, when the government was tapping her phones, stretched the imagination, to say the least. But so did the idea that, after all communication from Hawkins cut out, the U.S. government did not immediately swoop in and seal that building – so there are some things I just have to roll with.)

Part of this plot definitely felt like fan service, but I generally liked the way they handled Nancy’s vengeance for her friend. The media does prefer pretty victims, the sort who fit conventional beauty standards and are captains of the cheer squad, so Barb is exactly the sort of girl whose disappearance might fly under the radar and be forgotten. That felt realistic to me, as did Nancy’s frustration that this was the case. The series handles it rather hamfistedly, but the emotional core of it – some victims don’t get advocated for – felt true enough that it didn’t annoy me.

TMS will certainly be posting more thoughts and takes on specific elements as the week goes on, but those are my initial thoughts on the big changes. Let us know what you’re thinking the comments!