These are not the droids you're looking f--oooh, shiny. 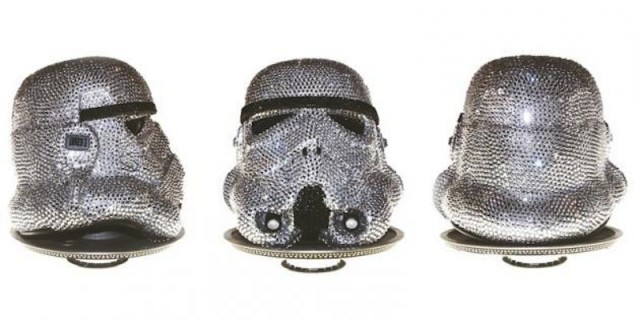 StormTroopers are pretty great. You know what could make a StormTrooper even cooler? Bedazzled helmets, of course. And if you’re in London this October, you might be able to see this fantastically blinged out headgear yourself at the Saatchi Gallery.

First started  in 2007 by Ben Moore and Andrew Ainsworth, propmaker and original creator of the StormTrooper design, Art Wars is a collaborative project that seeks to express the struggle over ownership of the now iconic symbol. In fact, the project had to be shut down for a small period of time while Ainsworth sued LucasFilm for the copyright of his design, which he won back in 2011.

Since then, Art Wars has bounced back in a huge way — it’s been featured in advertisements and billboards throughout the London underground, and was even on the most recent March pull-out cover of Wired. You know that pink StormTrooper-in-a-suit you see everywhere now? That was Moore’s idea

The project is now set to launch a new exhibit at the inaugural Strarta Art Fair (the venue  is the Saatchi Gallery) in London, UK from October 9th to the 13th. It will also be put up on billboard space across the Regent Park underground station to coincide with Frieze, an international art fair that takes place from the 17th to the 20th. After the exhibition, all the pieces will be auctioned off to raise money for ‘The Missing Tom Fund,’ which Ben Moore started with the support of the Missing People Charity after his brother Tom disappeared in 2003.

Contributing artists include Damien Hirst, David Bailey Paul Fryer, Joana Vasconcelos, Yinka Shonibare, Mat Collishaw, Mr.Brainwash (sorry but I can’t not picture the Paul F. Tompkins impression of this guy right now) , Ben Eine, Antony Micallef, Oliver Clegg and Jake and Dinos Chapman. All the artists involved also got access to the the original 1976 mold that was used to create the first StormTrooper helmets in order to work on their own pieces. I didn’t think it was possible to be jealous of Damien Hirst before, but I totally am now. Wait, who am I kidding. Of course I’m jealous of Damien Hirst. That dude must live like a freakin’ emperor. I’m picturing gold-plated everything. Except, you know — tasteful.

You can also check out more images of the exhibit on the official Art Wars website.