If We Had a Really Big Telescope, Could We See Star Wars?

And then if we get the super-high-tech-laser from Paycheck, could we watch Firefly, too?

Everyone likes watching Star Wars. They’re awesome movies, and I think we’ve all had that majorly trippy moment when we realize “A long time ago” means that everything we’re watching happened in the past. But if it was so long ago, and so far away, that the light is reaching us now– does that mean we could theoretically watch Star Wars live?

Um, well, it’s complicated. VSauce takes on the question in the video below.

If you can’t watch, here are the basics: it’s all about telescopes. To see something close but small, like the flag on the moon, we need a telescope that’s 260 meters in diameter. But that’s just to see the flag. To really make it out, stripes and stars and all had they not been sun-bleached, that telescope would have to be 6850 meters.

The biggest telescope being made right now, the European Extremely Large Telescope, will have a mirror with a diameter 39 meters.

Then let’s take something farther away and bigger, like Pluto. Here’s the most detailed picture of Pluto from Earth: 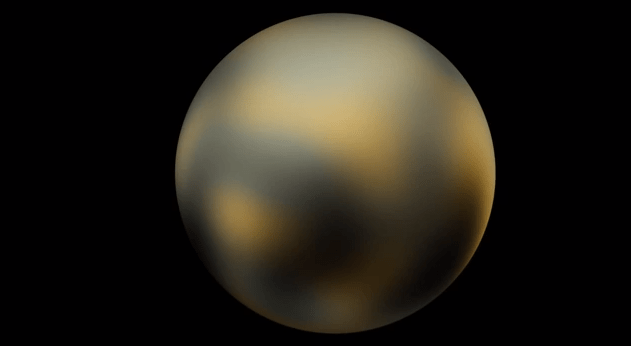 Pluto is 4.2 billion kilometers away.

So why can we see something like Andromeda so clearly, when it’s 2.5 million light years away? Because it’s so big– Andromeda is 260,000 light years across.

To see something as small as the forest moon of Endor, you would need a telescope the size of four-and-a-half suns. To see a cute little ewok on Endor? That telescope would have to be bigger than our solar system.

Then there’s one more problem: everything is moving. Just like a photo taken in a moving car is blurry, any of these, should they be possible, are being taken from one moving object (because everything is orbiting) of another moving object.

So could we watch Star Wars in real time if it had actually happened? Not so much. But what we could see would probably still be better than the prequels.