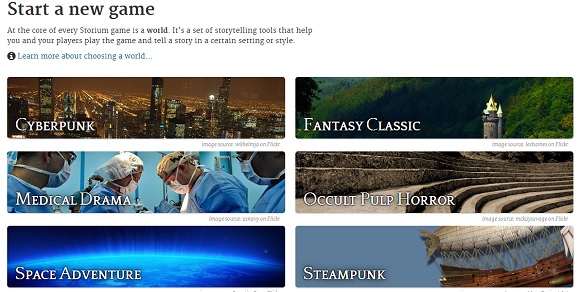 I’m no stranger to group storytelling. In high school, I wrote fanfic with a friend, swapping a spiral-bound notebook back and forth. During that same time I was working at a renaissance faire and my inbox overflowed with email threads of in-character letters. When I was in college, I was an active participant in a Star Trek sim. My World of Warcraft guild forums had a section dedicated to roleplaying. And in recent years, after I moved countries, my previously-local friends and I went through a short period of playing Parsely and Dungeons & Dragons via Google Hangouts.

So believe me when I say — if you like to roleplay, if you like collaborative storytelling, if you have gaming friends you can’t meet in person, Storium is what you’ve been looking for.

I went into this one blind. April has been a hectic month for me, and though I had given the game a cursory look before I agreed to dig deeper, I didn’t have a solid understanding of what Storium actually was. “It’s a…simming game, kind of,” I said to my partner over dinner, after she asked what I was going to play that night. “With action cards, I think.” I shrugged, and took another bite of pasta. “It looks promising.”

It’s very promising. It’s also one of those games that’s difficult to condense into a pithy description (”online storytelling game” doesn’t do it justice). After I’d logged into Storium (it’s browser-based), watched the video, and skimmed through the instructions, I still didn’t have a good feel for it. That’s more on me than the developers — I learn by doing. I needed to dive in.

As I quickly figured out, Storium is essentially an elegant framework for simming, with the added kick of card game-ish mechanics. For the uninitiated, a play-by-post game (also called a sim) traditionally takes place on a message board or through an email list. There’s a basic premise, and a host who wrangles the players. Depending on the game, players either create whatever characters they fancy, or are given clearly defined roles (such as in the Star Trek sim I played — I was cast as the first officer, but was allowed to build my own character within that role). The players then take turns writing chapters or scenes, typically tagging other characters to pick up where they left off.

Storium operates similarly, but it’s got a structure more like a pen-and-paper RPG. Each story is a world, and every world has a narrator (read as: game master). Now, I imagine Storium is most fun when writing your own story from scratch, but it’s also got a set of pre-built templates you can use right away (which was perfect for me, as I lacked an abundance of time). The templates can serve as a customizable jumping-off point, or you can use them as-is. There’s a whole bunch of template worlds available — Urban Fantasy, Steampunk, Occult Horror, and so on. Me being me, I went with Space Adventure. 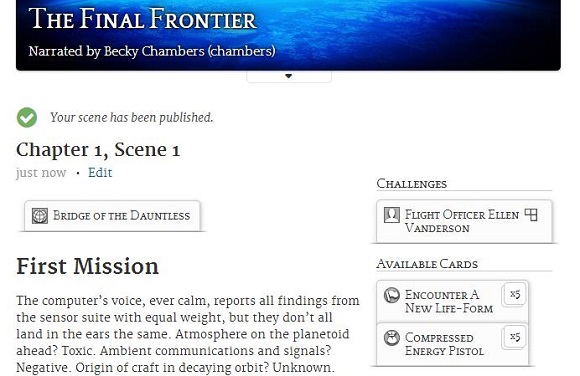 The narrator’s first task is to set the stage. Write your premise. Find a pretty picture to go with it. Specify whether this game will be public (which anyone can read and/or request a spot in) or private (just for you and your buddies). Specify how much of a time commitment your game will require (for example, 2-3 scenes per week). Line it up, and let it go.

If you don’t have specific players in mind, this is the point where you sit back and wait for folks to sign up. Otherwise, you can send email invites to friends. The narrator has complete control over who joins their game. If someone submits a character who doesn’t fit, you can send the request back, asking for revisions. You have this kind of control over invitees as well. As someone who has watched many an RP session crash and burn due to nonsensical characters, trust me, this is an awesome feature.

I enlisted my partner as my guinea pig. Side by side on the couch, we oooh-ed over how smooth the whole process was. I sent an invite. She got a tidy little character creation form, which she filled out and submitted. A minute or so later, I got an email notification letting me know someone wanted to join my game. Easy peasy.

Once I had a player on board, I was free to post a scene. The narrator can sow a scene with cards — challenge cards which will affect the narrative, item cards which can be required for later challenges, goal cards which behave like side quests. My partner had cards of her own, which she selected during character creation. Strengths and weaknesses (I was somewhat reminded of GURPS in this respect), assets, and a subplot (!), which gave her extra flavor. Each of my challenges required her to play a set amount of cards to overcome them, but she also had to describe the action taking place. 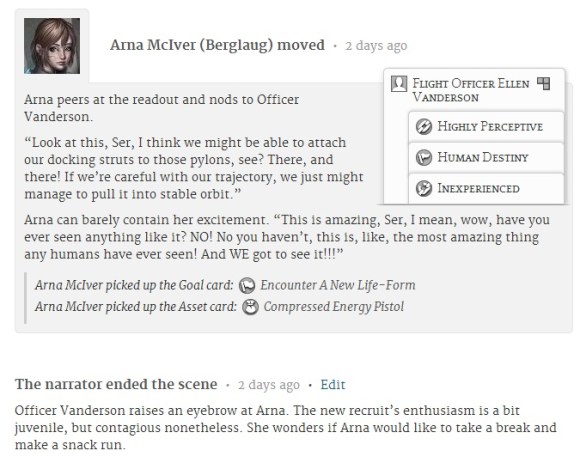 I could give her a setup, and I could try to guide her actions, but the decisions she made were ultimately her own, and they affected the way I wrote subsequent scenes. It’s a dynamic that’s instantly recognizable to anyone who’s ever roleplayed around a table. We were both delighted by it.

“This is exactly what we’ve needed,” she said. “We need to get our stateside friends in on this.”

Because, see, the reason the G+ Parsely and D&D sessions were short-lived is that my friends and I are busy. We all have various combinations of jobs and spouses and families, and as much as these things interfere with in-person gaming sessions, it’s exponentially worse when you factor in four different time zones. Storytelling games wither without the momentum generated by regular sessions, and preventing that wasn’t practical for us.

But an online game people can play on their own time, which automatically sends email updates when there’s something new to read, which requires you to check in just a couple times a week — that’s ideal for me. I bet it’s ideal for a lot of people. Not to mention this game’s presentation is slick. A friendly, easy-on-the-eyes user interface. An unobtrusive sidebar for out-of-character conversation. The means to nudge players that need to get moving (players can nudge the narrator, too). Storium streamlines everything that is messy about group roleplay. It’s like the Ikea closet organizer of online storytelling — simple, effective, uncomplicated.

Storium’s currently in open beta, though it requires a Kickstarter backing to play (they hit their funding goal in twenty-four hours, so yes, this is happening). To sweeten the deal, they’ve got an impressive roster of authors and game designers slated to create worlds (Mur Lafferty, Elizabeth Bear, and Nancy Holder, to name a few). I highly recommend that you check this one out.