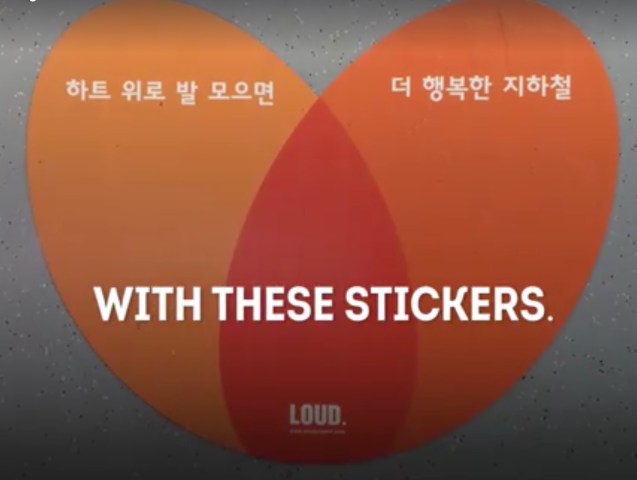 In most big cities with subway systems, one problem continues to plague everyone who would prefer to sit during their commutes: Manspreading, when men sit with their legs spread wide apart, taking up the seats beside them, for “ball space,” apparently. (Um, unless you’re suffering from elephantiasis, your balls are not that big.) In Seoul, South Korea, over 5 Million people ride the subway every day, and manspreading is an issue. Thankfully, one college student decided to try and do something about it.

In the video below from AJ+, Jiyo Hong talks about his Orange Heart stickers, which he designed for a marketing contest sponsored by ING, and is currently being used on two of Seoul’s nine subway lines:

What’s awesome is that Hong is a young man who is not afraid to acknowledge when his experience as a man walking through the world blinds him to the tiny indignities women have to suffer every day. He says, “Honestly, I didn’t think it was a big issue at first. It’s probably because I am a man. [But] as I read more news about manspreading, I realized one’s petty behavior could create a huge discomfort for others.”

With young men like Hong taking on manspreading, and teens like Jose Garcia in Florida carrying tampons and pads both to help out his female friends and to help his guy friends get over the idea of periods being taboo to talk about, I’m filled with hope for a future founded on gender equality. More of this, please!