Stop Making Excuses for Fanservice in Anime | The Mary Sue

Mr. Otaku, tear down this wall of T&A! 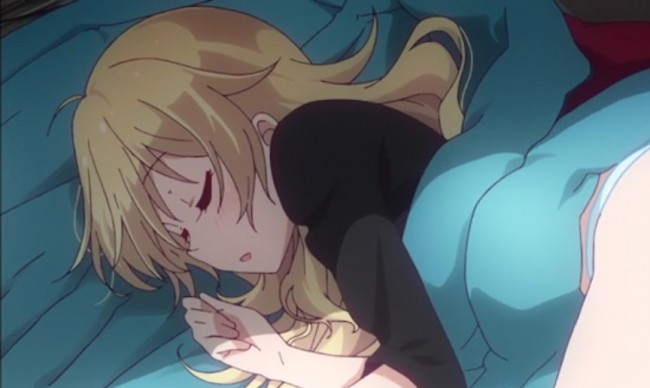 (Warning: This article and some links contain NSFW content.)

Every year, anime fans wonder why Japanese animation isn’t being taken more seriously by critics. I get it; in 2016 alone, just look at the blend of history and tradition in Showa Genroku Rakugo Shinju, the Ghibli-esque magical realism of Flying Witch, or the animation spectacle of Mob Psycho 100 to glimpse the versatility and sophistication anime has to offer. Why is unexceptional western television given valuable print space while exceptional anime is not?

And then the otaku shrug their shoulders and go back to conversations about who the best girl is, whose waifu is trash, and how irrational anyone must be to stop watching a show as soon as female characters show some T&A. 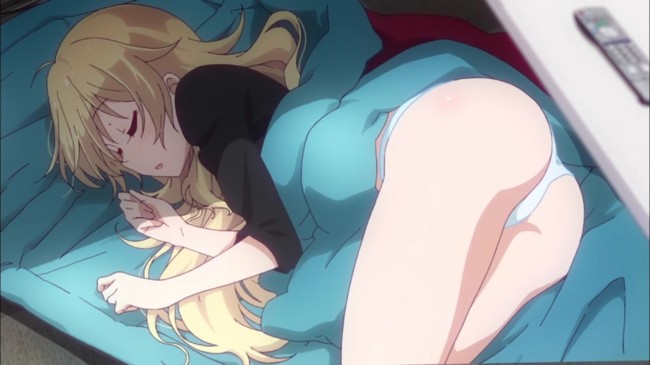 Anime has a reputation for sexualized ultra-violence on the one hand (tentacle?) and childish commercialism on the other. This reputation is not undeserved, given the type of anime that would get licensed and translated back in the dark ages of VHS. The wealth of remarkable anime between the Pokemon and Urotsukidoji ends of the spectrum has been largely overlooked, even now a wider range of anime is more accessible than it has ever been.

Here’s a thought: maybe critics would be more enthusiastic if the face of anime weren’t pro-Gamergate, anti-Ghostbusters trolls. I wonder how many people who were once neutral towards anime have developed an instinctive aversion to it, associating anime girls with anonymous entitlement?

Here’s another thought: maybe that’s not unfair. Maybe becoming the visual of choice for misogynistic harassers is the unsurprising result of a fandom that has spent years normalizing the objectification of women.

I’m not talking about nudity itself, which is only as sexual as the artists make it. (Note the contrast in the above images.) I’m also not talking about erotica/hentai, where sexualization is expected. I’m talking about the regular girls in regular shows who are designed to sexualize non-sexual situations for commercial gain despite the resulting artistic loss. I’m talking about sexual fanservice, the culture that surrounds it, and how we can bring our fandom in line with more progressive geek fandoms which receive more critical attention.

Step One: Change the conversation

I say “fanservice,” but let’s be clear: gratuitous sexualization pandering to the subset of fans who refuse to spend money on an anime unless they see some boobs is a disservice to everyone but that subset. Fanservice is neither a service nor for all fans. (Anyone itching to bring up “manservice”: a) there’s not as much as you think, b) it is not a direct equivalent and c) objectification of men is only happening because the objectification of women has been normalized.)

And yet, the strongest objection fandom allows is “Well, fanservice isn’t my thing, but I understand why some people like it,” or “It’s not fanservice that bothers me, it’s poor writing.” Just look at any discussion thread where people who criticize fanservice are shouted down until they give in or give up. You learn quickly that objecting to fanservice will brand you as narrow-minded and–worse–a feminist. With an agenda. (As if straight boys defending their boner-fuel are unbiased rational thinkers.)

Our sci-fi, fantasy, comic book and video game counterparts have advanced the conversation around women’s representation in geek circles, and anime fans should join them. Start from the premise that the objectification of women can only have a negative impact on the type of anime that is produced and the type of fan behavior it enables. Consider whether you actually enjoy the objectification of women in anime or whether you only tolerate it. If you would actually prefer your anime without objectification, express that without the “personal taste” or “bad writing” qualifiers. Make it so that those who want to maintain the jiggling status quo have to justify their position rather than the other way around.

Step Two: Send a message with your money

The only compelling reason to objectify women in anime is commercial, i.e. if the creators think the majority of anime fans will only generate profit for a show if they see boobs in it. I refuse to believe this is the case, but the only way to change this perception is to change the market. This is not impossible; fujoshi have changed the anime market in Japan by spending money on the shows which best suited their wishes. If non-objectifying shows become more profitable than objectifying shows, the market will follow.

Anime consumption has changed. Thanks to simulcasts, for the first time we have a way to communicate directly with Japanese creators as shows are being broadcast. The Funimation team have said they send viewing figures to Japan every week and advise viewers to watch episodes the week they become available to let creators know you like their work. If you prefer to marathon-watch, they suggest timing it so that you watch the season finale shortly after its release. If a show does not objectify women, support the creators by viewing it in this way.

Crunchyroll actually divides your subscription fee between the shows you have watched, so consider which creators you want your money to go to. Is ”sexualized naked teenagers” your dealbreaker? Maybe it’s “groping as meet-cute”? Figure out where you draw the line then draw it hard, limiting how much of your money funds productions that present your dealbreaker as entertainment.

The insular nature of anime fandom influences the industry to produce anime that supports the insular nature of fandom. If we want more critical attention for anime, we need to make it more welcoming for everyone, pull down the giant wall around it scrawled with “NO GIRLS ALLOWED! … Okay, girls can come in BUT NO COMPLAINING ABOUT THE BOOBS!” There are so many positive, thoughtful anime fans and smart, innovative shows, but I don’t blame anyone who doesn’t get close enough to find that out.

Don’t enjoy fanservice? Have your say in this two-question, two-minute fanservice survey.