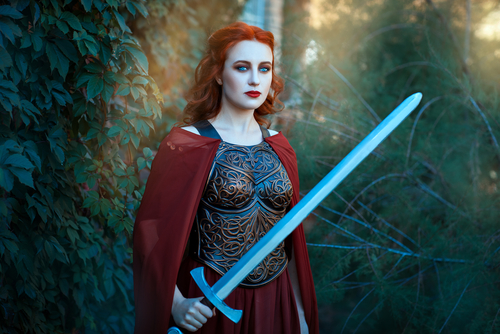 Hi, I’m Lynne M. Thomas. I’m the co-editor-in-chief and co-publisher of Uncanny Magazine, along with my husband, Michael Damian Thomas. And according to Wired, I’m partially responsible for sparking a culture war.

I co-edited Chicks Dig Time Lords, a collection of geek girl essays about Doctor Who which won a Hugo Award in 2010, and I also edited the story “If You Were A Dinosaur, My Love,” which won a Nebula Award in 2014 and was also nominated for the Hugo Award. (So 25% of Wired’s list of “The Books and Stories That Sparked a Culture War”.) I won two other Hugo Awards for the SF Squeecast, a group podcast that was all about telling people what was awesome in SF/F. My Uncanny Magazine is currently a finalist for a Hugo Award and a World Fantasy Award. Uncanny has had 14 different award nominations so far for stories, art, and poetry.

Both Chicks Dig Time Lords and “Dinosaur” are routinely attacked on the Internet by certain people (a parody of “Dinosaur” made it onto this year’s Hugo Award ballot due to a slate and as part of a campaign of ongoing harassment directed at its writer). These works are derided by people who believe inclusive SF/F is bad for the genre, or just plain bad. These works were pointed to as the reasons for creating certain Hugo Award slates over the last few years. A well-known alt-right website weirdly implied that Tor Books was responsible for the Hugo nominations for those two works since they were so bad. (I’ve never worked for Tor.) There have been dozens of articles written about my work and what is wrong with it; most of them don’t mention my name.

I stand by my work. I’m proud of my work.The stories we tell to one another matter, as do the storytellers. Editors understand this. We select stories we want to see out in the world.

Yet many of us have to expend way too much effort to do so. Our daughter Caitlin is disabled, nonverbal, and uses a wheelchair. I’m bisexual and female. Michael is genderqueer, bisexual, and disabled. We shouldn’t have to search high and low to find stories that reflect us. And neither should anyone else.

When we founded Uncanny Magazine, we decided we were going to make a platform for writers and stories from every conceivable background. We assume you belong here too. That is our default. When writers have the space to tell their stories without having to expend energy demonstrating their right to exist, they produce some downright extraordinary work.

Sometimes those stories are critical examinations of the worlds we inhabit, from points of view we don’t always consider. Sofia Samatar’s “Those” examines colonization from the point of view of the colonized. Sam J. Miller’s “The Heat of Us: Notes Toward an Oral History” reimagines the Stonewall Riots as sparked by literal combustion from collective anger. Lisa Bolekaja’s “Three Voices” spins a tale of the transformative power of music in the Black community. “Folding Beijing” by Hao Jingfang (translated by Ken Liu) follows a sanitation worker who will endanger himself trying to make a better life for his daughter. In E. Lily Yu’s “Woman at Exhibition,” a viewer eats a painting in protest of how women are often erased from their own artistic histories.

Many of our stories focus on friendship and community, like Shveta Thakrar’s “The Rainbow Flame” and Amal El-Mohtar’s “Pockets,” or the long-suffering graduate students in Elizabeth Bear’s “In Libres.” Sometimes, there are tales of how navigating our relationships and communities can be…complicated, like in Sarah Pinsker’s “When the Circus Lights Down,” Catherynne M. Valente’s “Planet Lion,” Maria Dahvana Headley’s “The Virgin Played Bass,” Charlie Jane Anders’ “Ghost Champagne,” and Kat Howard’s “The Sound of Salt and Sea.” Other stories are about coming to peace with where we are at, like John Chu’s “Restore the Heart Into Love” and Sunny Moraine’s “Love Letters to Things Lost and Gained.”

These stories’ themes are wrapped up in ghosts, zombies, space ships, psychic lions, first contact, horses made of bone, cat musicians, sentient prosthetics, and more. Each of these stories comes from the viewpoint of a writer who is marginalized, often in multiple ways. Their experiences and voices speak to readers from similar backgrounds, and to every reader who wants to expand their brains by seeing stories from viewpoints that are not their own.

David J. Schwartz calls this “Unicorn space,” a twist on our Space Unicorn mascot that I wish I’d thought of. Space Unicorns are folks who finds ourselves in stories and read stories about folks that may be different from us, and our response is: I’m glad you’re here, too. Because that is how you build a community; specifically, the kind that I prefer to live in. We still need more spaces where our right to exist is not in question. So let’s keep building it. Together.

We call our supporters (Kickstarter backers, subscribers, Patreon patrons, readers, and creators) the Space Unicorn Ranger Corps. Right now, we’re recruiting, via Kickstarter. We are putting together our third year, and we want you as a shareholder. This is your magazine.

I’ve been busy working with my partner-in-crime Michael, Michi Trota, Julia Rios, Erika Ensign, Steven Schapansky, Deborah Stanish, Amal El-Mohtar, and the rest of the Uncanny Magazine team to keep bringing more and more inclusive SF/F, issue after issue, podcast after podcast. We’ve lined up a whole bunch of fantastic contributors for next year, along with some epic backer rewards. The more money we raise, the more spaces for new contributors we create. We will be able to hand the mic to so many creators from various backgrounds. We want you to make the Unicorn space with us.

Three-time Hugo Award winner Lynne M. Thomas is the Co-Editor- in-Chief and Publisher of Uncanny Magazine with her husband Michael Damian Thomas. The former Editor-in- Chief of Apex Magazine (2011-2013), she co-edited the Hugo Award-winning Chicks Dig Time Lords, as well as Whedonistas and Chicks Dig Comics. She moderated the Hugo-Award winning SF Squeecast and contributes to the Verity! Podcast. In her day job, she is the Head of Distinctive Collections and Curator of Rare Books and Special Collections at Northern Illinois University, where she is responsible for the papers of over 75 SF/F authors. You can learn more about her shenanigans at lynnemthomas.com.