Stinky Corpse Flower Blooms in Washington D.C., Not Quite as Stinky as Everyone Had Hoped

Yeesh. I'm pretty sure that thing feeds on human blood. 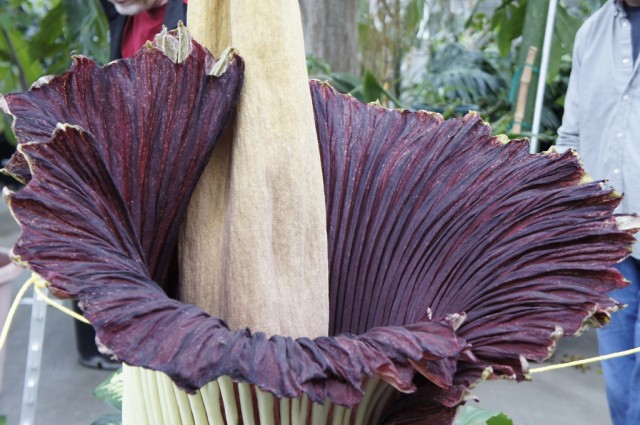 The titan arum, colloquially known as the “stinky corpse flower” for its pungent odor that attracts dung beetles and other pollinating insects, is rarely found outside of its home in the Indonesian rainforest. The United States Botanic Garden has one, though, and it’s blooming for a limited time only! Probably 24 to 48 hours, to be specific.

Standing at approximately eight feel tall, the stinky corpse flower is one of the largest flowering plants in the world and has a very unpredictable blooming cycle, sometimes going years or even decades between blooms. The last time the plant at the Botanic Garden opened up was in 2007, making this the first bloom of its kind in 6 years. Once it does bloom, however, the flower collapses after just a few days.

Naturally, this means that tourists have been lining up around the block in the summer heat to see this impressive flower, perhaps forgetting about the part where it smells like a decomposing corpse. Or, you know, coming arriving so they can get a whiff of just that scent, which is… a confusing way to feel about a thing. Takes all kinds, I guess. Staff at the garden have been amazed by the turn out of visitors over the last few weeks, with spokeswoman Laura Condeluci telling a reporter for AFP, “We have had more than 98,000 people come visit from July 11 through July 21.”

So what’s the verdict from tourists who’ve seen the flower first hand?  The worst of the stench has passed now that the flower is ready to collapse, so apparently it’s “disappointingly not stinky.” Apparently that’s a feeling that is possible. Personally, I think I’d be pretty happy about it not stinking to high heaven in 90+ degree weather, to be honest. That’s just me though. Call me weird, but given the choice, I prefer for things not to stink like festering corpses.

It could be worse, of course. The flower could want to eat stinky corpses instead of just smell like ’em:

(via Phys.org, image via Amy Youngs)