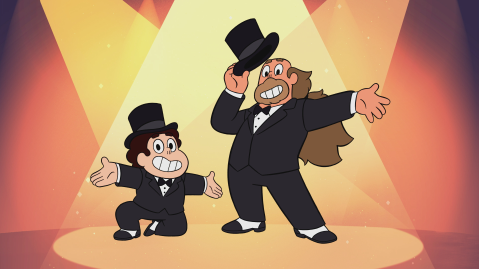 Steven Universe, you’re killing me with these constant long breaks! You’re just lucky that when you do come back, it’s always awesome.

The show is returning to Cartoon Network for a four-week event they’re dubbing Steven Universe: Summer Adventures, which begins with two back-to-back episodes on Monday, July 18th. These adventures include two episodes that are exciting for very different reasons.

First, on Tuesday the 19th, we’ll get an episode called “Mr. Greg.” And while Steven Universe has always incorporated music into its storytelling, “Mr. Greg” will be the very first musical episode! In it, Steven, Greg and Pearl take a trip to Empire City to live the good life. I don’t know how he’s done it, but somehow, Greg has become a “bazillionaire.” Check out this clip from the upcoming episode.

Even bigger and better than that is an over-sized episode coming in August called “Bismuth.” According to a press release from Cartoon Network, in this 22-minute special episode, “Steven discovers something the Gems thought was lost to the past inside of Lion’s mane.” From what we see in this clip below, that “something” seems to be a long-dormant Crystal Gem:

And yes, you heard right! That new Crystal Gem, whose name is Bismuth, is voiced by Orange is the New Black‘s Uzo Aduba! Can I just say how much I love the rainbow dreads? I can’t wait for another month of Steven and the Crystal Gems! Steven Universe: Summer Adventures returns to Cartoon Network on Monday, July 18th at 7:00PM ET/PT.