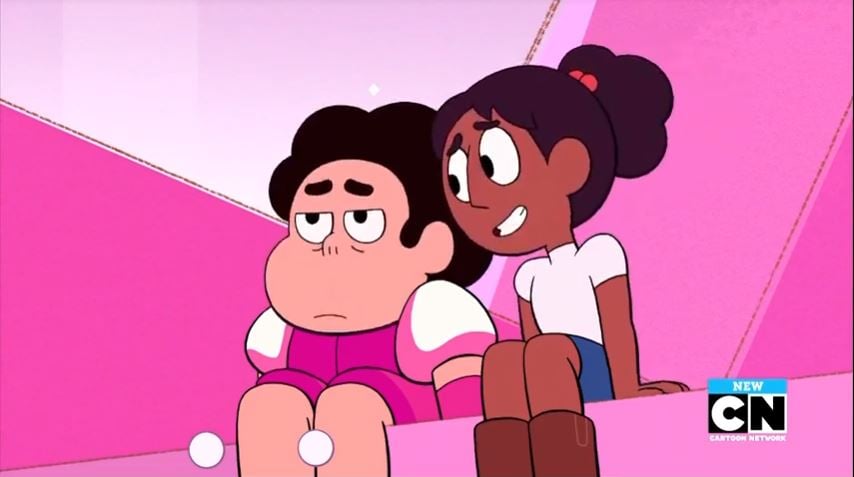 The Recap: Steven holds a ball in hopes of getting to speak with White Diamond, but the guest of honor doesn’t show. When Steven and Connie fuse, Yellow and Blue quickly imprison them and the rest of the Crystal Gems.

Yup, there it is—the turn this arc needed in order to hold together emotionally. Steven’s optimism and belief in others is an amazing force for good, but it can’t magically undo entrenched societal oppression in one grand gesture. And this episode is well aware of that fact.

Before the whole Big Metaphor, I wanna shout out some of the visuals. Each of these Homeworld arc episodes have been three-person jobs, and the artists are clearly busting out their best material—Steven’s dream manages to encompass stretchy, ridiculous dream logic; dark narrative implications with White (formerly Pink, it seems) Pearl; and a bloodless but loaded grotesquerie with Steven coughing up Rose’s hair.

The rest of the episode never visually hits the same peak again (though the elegant but icy dance sequences and ominous shadowing on White Pearl come close), but it makes up for it in writing. We finally get a chance to see Blue and Yellow Pearl as individuals rather than accessories, in a scene that gives Deedee Magno Hall ample opportunity to showcase her skills.

Best of all, though, is the slow realization that Steven’s grand party is actually that Christmas you spent at your parents’ house when the extended family was in town, where you quickly learned that the people who said they accepted you were actually just humoring your quirky little phase, and could you please stop acting so gay, you are embarrassing yourself.

It is a very specific but, I suspect, resonant tension. Blue and Yellow’s patronizing dismissal of Steven, in comparison to their warmth in private, is deftly illustrative: This is fine and all, as long as you’re not actually trying to change the way we act or think in any inconvenient way. The casual dehumanization of Connie and the other gems is now pointedly underscored as we step back from Steven and remember what everyone else must be experiencing.

The concept of “passing” is coded heavily into this episode, particularly as it applies to queerness. Garnet faces the most disrespect and anguish because she’s the most visibly defiant of Homeworld’s normative standards, and Estelle packs magnitudes into a only a few lines. Steven, even if he’s going to the ball “like that,” at least isn’t a fusion. He can fit into the spectrum of “acceptable” presentation, which on the one hand supposedly grants him the ability to talk with the other diamonds and potentially sway their thinking … but in practice makes him complacent in his friends’ humiliation in hopes that maybe something might change eventually.

It works well as a team with the previous episode, “Familiar,” bringing home the reality that Steven’s newfound position hasn’t really changed anything—that, in fact, he reaches more “hearts and minds” by becoming Stevonnie. Giving the closeted fusion (as of yet unnamed, though I’m sure speculation has proceeded robustly) the line “I knew I couldn’t be the only one” seals the metaphor extra firmly for anyone who’d gotten up to get a sandwich for the past ten minutes.

It’s refreshing to see the show display its narrative and themes in such a concise way after years of drip-feeding. A good chunk of that is out of the crew’s control, of course, but this is a strong reminder of how the show drew such strong acclaim in the first place. This is good, well-paced stuff with strong ideas and captivating visuals. It generates excitement for its own, self-contained sake rather than long-term investment in the characters.

There’s one more episode before the TV movie, which will hopefully give us a chance to spend more time with Stevonnie—a chance to develop a still somewhat rare character and a moment to breathe while everyone else is in a rather dire, Empire Strikes Back sort of situation. Here’s hoping the payoff will live up to this extremely solid groundwork.