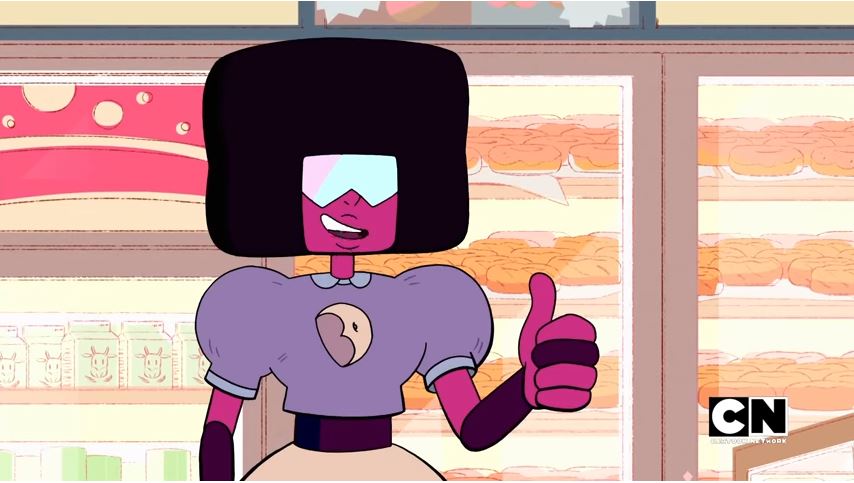 The Recap: Garnet spends a day acting as randomly as possible in hopes of exploring unlikely futures. She confesses to Steven that she’s felt lost and uncertain in the wake of recent unpredictable events and needs to reconsider how she uses her powers.

Have we reminded ourselves lately that Estelle is really talented? Now seems like a good time to do that. Garnet had a great chance to show off excitement and open passion with the rallying cry of “Your Mother and Mine,” and “Pool Hopping” explores the opposite end of the scale: fear, sadness, and uncertainty. It’s been a stretch since we’ve spent much time with the Crystal Gems, so this is an especially welcome turn of events.

This is the first three-person writing and boarding team since last season’s “That Will Be All,” which was also the last time Joe Johnston worked directly on the writing team rather than in a directorial position. It’s easy to see why he’s here, though. The micro-sketch setup of the episode lends itself to multiple voices, and Johnston also worked on “Mr. Greg,” which followed a similar string of single-character short scenes leading up to a big moment of catharsis. Bringing that extra pair of hands doesn’t seem like a bad idea for the first Crystal Gem-centric episode in (what feels like) a while.

It’s past time that we revisited the gems. Steven’s gone through a number of changes over the past dozen episodes or two, between learning about his mom, going to Homeworld, zombifying his dead friend, and so on. He’s grown up a lot alongside Connie and the other young characters, and meanwhile the Crystal Gems—an integral part of the ensemble even if Steven’s the main protagonist—have kind of … been on hold.

For Garnet, that means examining the fact that she’s not really the leader any more, though she’s clearly still capable of inspiring those around her. It should feel somehow cheap to have her breakdown be triggered by a bunch of cute kittens, the most helpless and adorable things on the planet, but it sidesteps being cloying. Part of that is, again, down to Estelle’s wonderfully earnest performance, and the other is that there’s no real sense of empirical danger. These kittens are going to be fine, in an immediate and practical sense.

That leaves Garnet’s breakdown fully in the realm of the existential, where it hits more than a few relatable beats. The text of her concerns is about huge issues like ending a war, preparing for the inevitable arrival of a probably genocidal force, and being literally precognitive. But anyone (or at least older viewers) can identify with worrying about how to keep your loved ones safe, or feeling like you can’t handle the pressure of being as responsible as people need you to be.

It’s the first time in a while that the show’s revisited the Gems’ role as parents in Steven’s life, and it feels important. It can be hard to reconcile the fact that Steven’s allegedly a teenager, given the art’s tendency to shrink him down to pocket-size, but the signs of his emotional growth are undeniable. For Garnet, that means navigating the fact that, while Steven will always value her advice and support in his life, he’s reaching a point where he no longer turns to her for everything. It’s one of those facts that’s obvious on its face but tricky emotionally, and the concept of Future Vision makes for a handy shorthand to explore it.

For Steven, he’s reaching the point in his life where he realizes that his parents are flawed people with their own insecurities—the show’s hit that beat before, but there’s a unique value in revisiting it with Garnet. While Pearl was obviously emotionally fragile from a fairly early point in the show, Garnet’s emotional distress was usually a sign that things were going very, very wrong. Revisiting those emotions in less dire circumstances allows Garnet the chance to be vulnerable rather than an endlessly stoic, deadpan support; and it’s also an important part of Steven’s journey to adulthood. Nothing says growing up like realizing even your coolest role models have concerns that are totally outside of whatever you’re thinking about.

From here, the show really needs to touch base with Pearl and Amethyst as well. The former will probably be a precursor to more plot revelations, given Pearl’s distress last time we saw her, but Amethyst is past due for another character-focused episode. And I wouldn’t say no to another Peridot episode that wasn’t quite so clumsily timed as the rushed breakup recovery. I don’t think all or any of that will be coming in the single episode still left in this bomb, but it’s not something the show can or should avoid much longer.

Next, one more Beach City episode for the road.