Steven Universe Recap: Your Mother and Mine 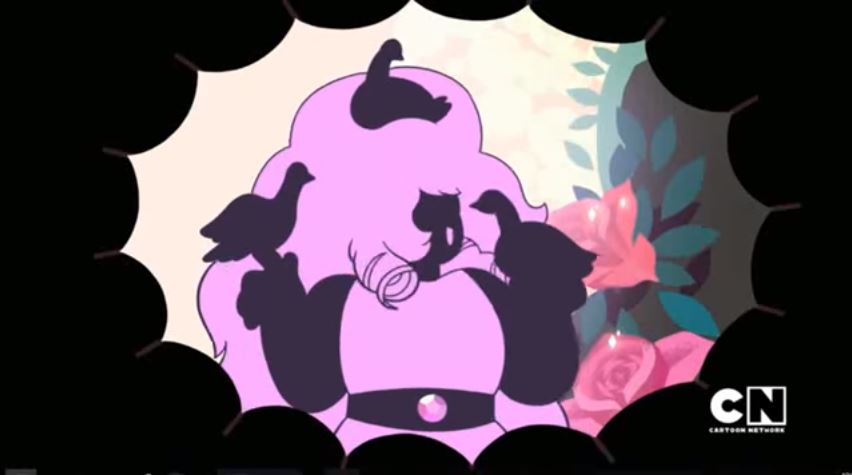 The Recap: Steven visits Lars and the Off-Colors, and brings Garnet with him. Seeking to allay their insecurities, Garnet tells the gems the story of how Rose’s rebellion, and how it embraced outcasts.

Another three months, another brief update from the powers that be at Cartoon Network. My heart truly breaks for the Crewniverse at this point, as trying to get a sense of intended pacing is downright impossible at this point—it’s been both four episodes and upwards of four months since Lapis and Peridot broke up, and the long stretches between new airings go by without word of any kind from CN’s advertising about when the next release will be.

With that in mind, how do we begin to look at “Your Mother and Mine?” Well, it’s a logical cap on a three episode arc that included “Lars of the Stars” and “Jungle Moon”….both of which aired back in January. And it’s followed, if I have my titles in front of me correctly, by three more on-Earth episodes despite this one ending with Lars and crew declaring they’re about to go on a dangerous mission….which is something of a frustration given that the show feels ever more like it’s trying to approach its last days. But would this feel different were it binged? We can’t know, and must cede that point to the rewatches a year or five from now.

As an episode on its own, I can say that this is pretty fine stuff. It brings back the gorgeous storybook aesthetic from “The Answer,” one of the show’s best episodes, and everything that episode did well comes with it. The most front-facing layer of this is that SU continues to be a really important series for young queer viewers of all stripes. Garnet’s story is a rallying cry for those rejected or oppressed by the dominant power structure. Having the Off-Colors there as a sounding board lets it be plainly triumphant in a way it hasn’t for a while, with all that talk of Rose’s complex motivations and morally grey actions.

The morally grey stuff isn’t gone, though. Once again, the framing of this as a fairytale, with every character narrated by Garnet, encourages the longtime viewer to question what motivates the story being told. Bismuth appears as a brave rebel in Garnet’s story—but we know that she wound up feeling betrayed by Rose. Garnet upholds all those who felt freed by Rose’s cause—but not those like Jasper, who felt destroyed by it. The script tells an impressive amount by what it omits, taking full advantage of the viewer’s previous knowledge.

In the end, it begs the question of who myth-making is for. The episode opens with each of the Off-Colors telling a version of Rose Quartz’s legend, and Garnet responds with her own legend. Not the real, messy truth, but the version these outcast gems need to hear in order to value themselves. Garnet doesn’t tell them any lies, which distinguishes her story from the false propaganda being told on Homeworld, but she elides the details that make history messy. She tells them about a hero, not a person. And that story is then topped with the conversation about Pink Diamond, because it wouldn’t be SU if it weren’t kicking at least one answered question down the road.

It’s an impressive attempt to balance both the idea that there’s “no such thing as a good war,” with dark decisions taken on every side, with a reminder that sometimes the cost of rebellion is indeed worth it. It feels like a conscious shift, the effort of storytellers who started telling a complicated war story in the years before there were literal Nazis in prominent places of American government, and who want to continue telling their story in a responsible way now that we’re on the other side of 2016.

It may be too herculean a task, in the end. The show’s main ethos, that there’s humanity in everyone and that empathy is our greatest gift, remains true, but it’s a lot trickier to navigate in a world where puff pieces about white supremacists appear in major newspapers and printing hate speech is spun as “showing both sides.” But I applaud the Crewniverse’s efforts, nonetheless, to try and respond to the world we’re in rather than carrying on with their story as they might’ve done in 2013. We’ve come a long way since “Gem Harvest.”

Next time we’re back on Earth again. But at least it’s a Sadie episode?