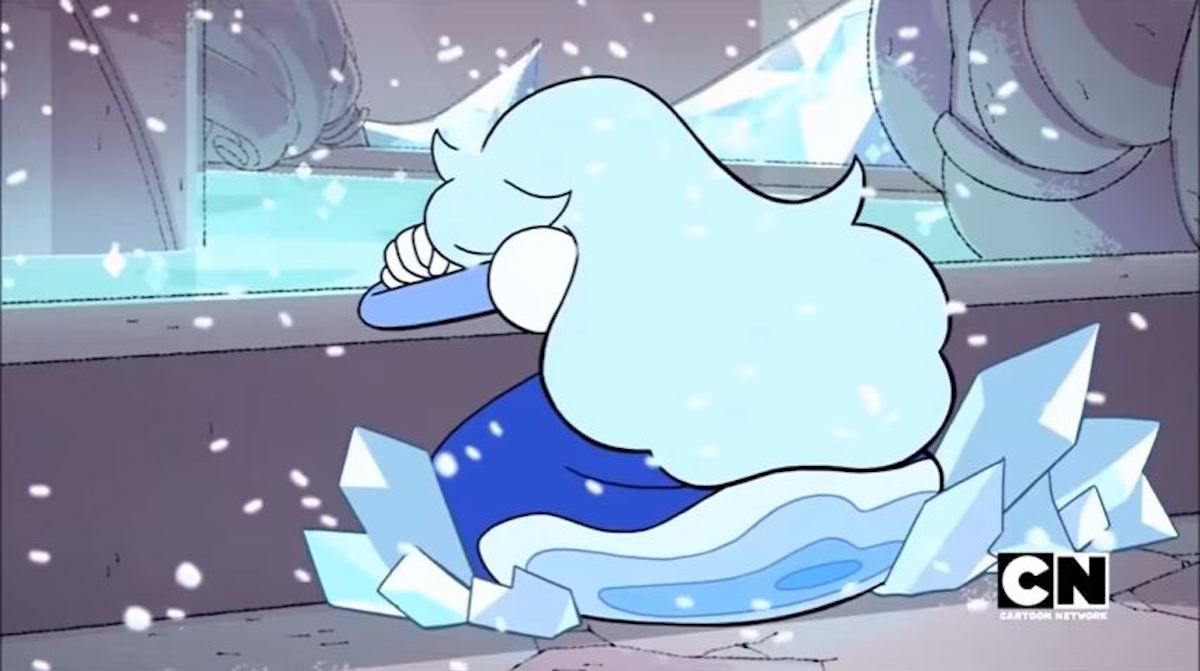 The Recap: Sapphire unfuses from Ruby, furious that Rose lied to them for so many years. Pearl and Steven chase after her, and Pearl is finally able to share her memories of Pink Diamond’s transformation into Rose, and how inspired she was by Garnet’s fusion. When the three return, however, Amethyst and Ruby are gone.

It feels like beating a dead horse at this point, but these recaps are at least partly a record of the show, so let it be noted that Cartoon Network once again included significant spoilers in its advertising of this batch of episodes, in what increasingly seems to be a deliberate sabotage campaign against their own property.

One thing we come back to over and over in discussion of this show is pacing. This is a story told from many angles and many voices over a long period of time, to an extent in-story and even longer in the real world. Rebecca Sugar mentioned on Twitter that this particular run of episodes has been five years in the making, and for this first episode at least … it’s a little bit late to the party.

Serialized narratives are a tricky thing. Sometimes stories are completely planned out years in advance, sometimes only months. Sometimes they take years to tell. Teenagers have grown to adulthood watching this show, forming their own attachments and theories, and when a show is based around a mystery, the longer you wait to tell us the answer, the greater the weight of expectation to satisfy with your answers—call it the Lost problem.

Rose Quartz and Pink Diamond both have a mountain of things to answer for, narratively speaking. She’s an interesting character, and an impressively complex one, but there are years of myth-making here, and with heavy episodes like “Bismuth” and “A Single Pale Rose” weighing large in the fandom’s mind, “Now We’re Only Falling Apart” feels insufficient as a response.

It is, admittedly, a welcome piece of clarification that Rose is an earnest character who genuinely meant well, and that she tried to take on the system from her position of privilege before going the whole revolution route. Those were always hotly contested, and the former in particular is important when considering her relationship with Pearl, as I wrote in the last recap, but the series has come too far in underlining the collateral damage of Rose’s actions for “she did her best” to cut it, at this point.

It doesn’t help that the scripting feels like an explanation to the audience rather than more fragmented POVs. Sapphire and Steven’s color commentary is too obtrusive and pat, with Sapphire’s understandable anger voiced in such a way as to make her a strawman while Steven calmly explains what she’s supposed to take away from the story, but we’ve come too far to return to a vision of Rose as an uncomplicated hero. The fact that she earnestly loved Pearl doesn’t undo the anguish she caused her over the years—it just makes it thoughtless, rather than malicious.

Speaking of which, this isn’t a good episode for Rose Quartz, but it’s a pretty solid one for Pearl, whose backstory gets some much-needed emotional closure here. We can, at long last, do away with fan characterizations of Pearl as deluded, clingy, and projecting onto someone who wasn’t clearly signaling mutual interest. Ding dong, and bury them deep.

Pearl’s earnestness here is enough to melt the heart; even more than with “A Single Pale Rose,” Deedee Magno Hall conveys a wide span of growth over eleven short minutes, continuing to be one of the cast’s all-time MVPs. Watching Pearl’s love and adoring devotion blossom from the root of a desire to please (which Rose probably never recognized or thought to stop) both feels natural and paints a picture of their lives together all the way up to Rose’s death, and yes, much as Steven’s commentary feels forced for much of the episode, it is gratifying to have Pearl’s love acknowledged as part of a love story, at long last.

Even the visuals feel a bit perfunctory this time around. While flashbacks have previously shown a bit of abstract flair, the visual design here doesn’t feel much different from an average episode. This no doubt contributes to the attempt to make this the episode of the Real, Unvarnished Truth, which, for some of the reasons we’ve already discussed, doesn’t really fly. All it means is that there’s nothing especially breathtaking to look at while contemplating that uneasy feeling in your gut.

The one exception is Rose and Pearl’s first fusion at the very end, which manages to capture a sense of wonder and emotional intensity otherwise missing from the somewhat rote revisiting of things we’ve already been told, but are now being told with rather more conviction. Even Garnet’s dissolution, despite the ’80s power ballad episode title, is so far a means to an end, but in fairness on that point, it also leads into a doozy of a hook for the next episode. Let’s see where it goes.