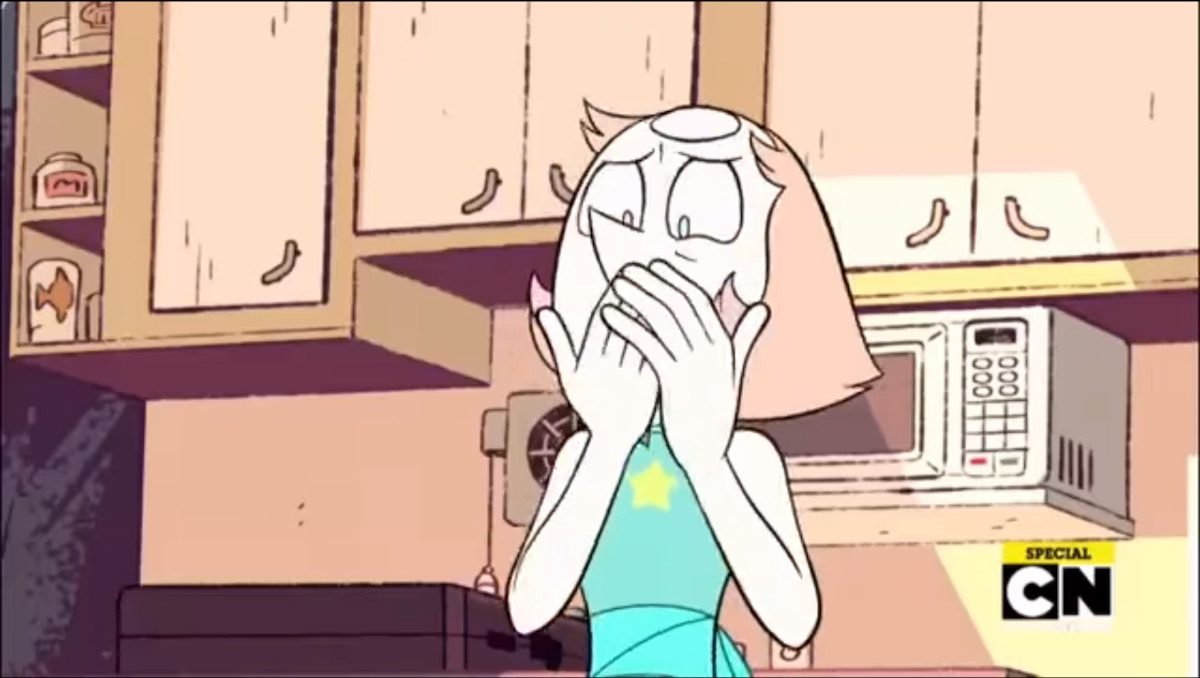 The Recap: Pearl loses her phone inside of her Gem and sends Steven in to find it. This allows Steven to view her memories, and discover the one thing Pearl was literally, physically unable to say—that Rose Quartz was Pink Diamond, and Pearl helped her fake her death.

Take a minute, Pink Diamond theorists. You deserve it. While you do that, I’m just going to lie down and whimper for a bit.

Okay, so. The tradeoff for Pearl being offscreen so long is that we now have one of the best episodes in a long, long time. The “journey to the center of the mind” episode isn’t exactly a subtle one but it’s often effective, especially with characters and questions this well-established. It plays on the crewniverse’s strong visual storytelling and allows the story to touch on multiple unresolved emotional beats before getting down to business.

There are so many technical elements to praise about this episode. Deedee Magno Hall brings down the roof with her performance, Florido and Cragg keep a light touch on the writing that brings up elements of Pearl’s character in a way that gives them deeper resonance, the backgrounds are on-point as ever as they descend from clean white to melancholy sunset pink to hellish red and finally to near black; it’s a moment of culmination on par with Gravity Falls’ award-winning “Not What He Seems.”

And there are many, many questions: how many of those phone numbers were unwanted, and how many were genuine connections that Pearl couldn’t bring herself to follow up on? What was the “it” repressed-war-memories Pearl did? Are we actually sure that white light came from Yellow Diamond? Oh, and why is Rose increasingly the worst?

This episode doesn’t just answer technical questions from seasons past. It brings a central thematic tension in the show to a head. In the recap of “Your Mother and Mine,” I mentioned that the show was grappling with the fact that it began in a kinder world with a lot fewer literal Nazis in power than the one we now find ourselves in. A story about how horrible people in power do horrible things but can still deserve compassion was once a considerably more theoretical discussion. The current political climate, especially for the marginalized people who’ve found this show a safe harbor, means necessarily asking a different question: at what point have you done too much to come back from?

Rose is a fascinating character. She’s complex, often sympathetic, and played marvelously by Susan Egan. But she’s not a good person, and the magnitude of what that means is now a thousand times greater than when we simply knew her as a general trying to win a war. This makes her complicit in or an active perpetrator of many, many more atrocities. And at a certain point, saying she felt bad about it doesn’t balance the scales—especially given that she didn’t so much smash the power structure as make herself the leader of a new paradigm.

It also makes Pearl’s devotion considerably more tragic. Their relationship was always uneven, but the secret-keeping scene couldn’t underline the gap between them more clearly: Rose didn’t trust Pearl with a secret, she compelled her into a silence that couldn’t be lifted even centuries later. It’s a harsh blow, making Pearl’s lonely tears on the beach and all those untouched phone numbers almost unbearably sad. Like the rest of Rose’s actions, there was undeniably love there. But not enough.

Which is all to say that the show is now at a crossroads: are Rose’s actions to be painted as flawed but for the greater good, or well-intentioned but ultimately little better than the other Diamonds, leaving behind a potentially apocalyptic mess for the next generation?

If it sticks that landing, SU stands a chance of becoming a true classic for this generation. If it doesn’t, all of the excellent emotional work up to this point will ultimately have ended in something well-meaning but slightly pat, a relic before its time. I’m far from losing faith—the (incredibly spoilery; thank you for that, Cartoon Network) preview for the next batch of new episodes seems aware of the gravity and horror of this revelation. But that tonal concern will hang heavy over the rest of the series, and may well challenge the crew right up to the very end.