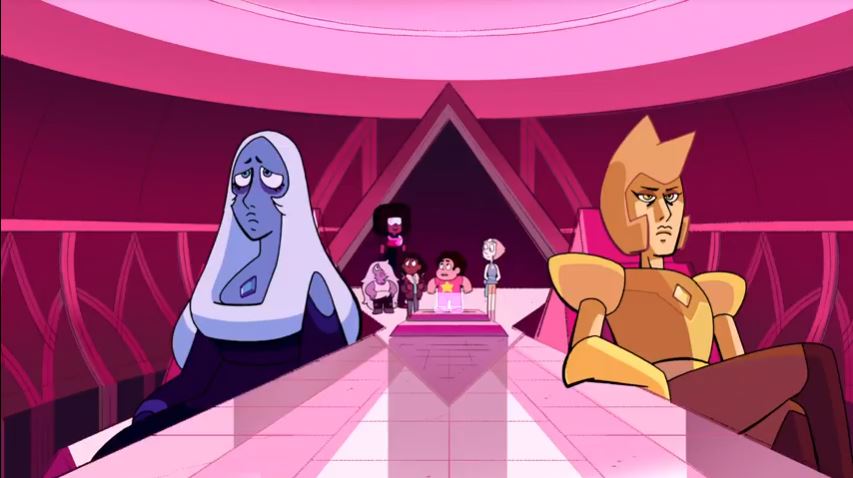 The Recap: Steven fills Blue and Yellow Diamond in (kind of) on Rose’s deception and the plight of the corrupted gems. While the three of them are able to come closer to healing the corruption than Steven on his own, full healing seems impossible without White Diamond—which means a trip back to Homeworld.

Well, here we are. This recap is likely covering ancient news for many of you. This episode was originally shown at SDCC in July, about two weeks after the last Steven Bomb—a time at which I’m sure there was a certain pulse-pounding element to its cliffhanger. There were certainly enough Tumblr memes about White Diamond and her eerie Pearl.

Ah, yes. Tumblr. The site that nurtured this show’s initial fanbase, bore witness to its most toxic elements, and housed a bunch of beautiful behind-the-scenes information from the crew. “How sadly fitting it is,” I couldn’t stop myself from thinking, “that the show is making its official return the same day as Tumblr merrily and mercilessly culls its user base.”

One can still visit Tumblr. One can still watch new episodes of Steven Universe—hell, you can probably still read my recaps of them, if this bit of melancholy doesn’t put you off—but there is a mounting sense of an era having passed, as if we are stepping on the bones of a corpse still moving.

Elsewhere, on Netflix, the new She-Ra cartoon bears blatant stamps of Steven Universe’s influence. Why shouldn’t it? Five years is time enough for new artists to be inspired and to create new content, but She-Ra is a show made for a post-2016 audience, able to speak to the emotional climate of the dystopian hellscape we’re currently living in.

And Steven Universe, it is increasingly clear, is burdened by the era in which it was made—“Gem Harvest” and its unfortunate airing date threw that issue into the spotlight, but the concern has never really gone away. When the show was planned in those first few years, the overall culture was more optimistic. There was a sense, whether true or not, that things were getting better.

It was the kind of atmosphere where a story about an oligarch who grows a conscience and tries to start over, making terrible mistakes in pursuit of making things right, might play—where all it takes to make things right is to reach out with your sincere emotions, because there’s good in everybody deep down.

There were not brazen white supremacists in power when Steven Universe was planned, to put rather too fine a point on it.

But one cannot change course on a show’s core narrative four years in, with so much investment of time and so many hard-working artists working on episodes months in advance—even before we get into the much-lamented indignities on the part of Cartoon Network’s marketing branch. So here it is, and here we are, and it is difficult to know what to do.

There was still a profound sense of pleasantness in watching “Legs From Here to Homeworld.” I realized that I had missed these characters, and that I enjoyed seeing them interact, even if the majority of the once-strong ensemble cast has currently been pushed to the sidelines.

And yes, White Diamond is magnificent—a triumph of imposing design even with the surprise stripped away (and if you avoided the multitude of spoilers, I do hope your rock is a comfortable one). The total lack of rage and simultaneous complete control she displays in her brief appearance suggest a great deal about what an imposing antagonist she’ll make. It will, doubtless, be quite the spectacle to see Steven face her down.

That’s another of those small, nagging problems that’s had time to foment over the long months. SU is famously a show in no particular hurry about its plot progression, frequently taking time to check in on Beach City and various emotional hurdles. It’s a decision I’ve defended in the past for giving the story a sense of scope and stakes regarding what the Crystal Gems were protecting.

But the pointed emphasizing of Steven’s Special Chosen One status at the end of this episode makes that slow build feel somewhat pointless, particularly as the show has finally turned its full attention to the Diamonds. The cosmic scale, both literal and figurative, of these characters has slowly begun to separate the viewer from those everyday concerns that were so vital to the early days of the show, turning us instead toward a chess game in which being born special is an intrinsically important component.

Chosen One narratives aren’t the worst thing, and Steven is plenty rounded as a character, but it feels like a somewhat tired narrowing of focus that further underlines how unintentionally disconnected the show feels from the current plights of its intended marginalized audience. Bismuth is the character for 2018, and she’s back on Earth.

The show is, for the moment, back to the long begged-for weekly premiere schedule that bolstered its early successes, and I would be lying if I said I wasn’t pleased to have the show back in my life. There’s even some part of me that appreciates Steven’s firm and clear-cut demand that the Diamonds fix what they’ve done, rather than trying to empath why we should feel bad for them at length.

But a greater part of me is sad, thinking about the many branching points that might’ve kept the show from feeling like a work no longer of its time. I fully intend to see things through until the end, whenever that might be, and I would love nothing more than for these rather pessimistic assumptions to be proven wrong, but for now, all we can do is wait. At least we’ve gotten very good at it.