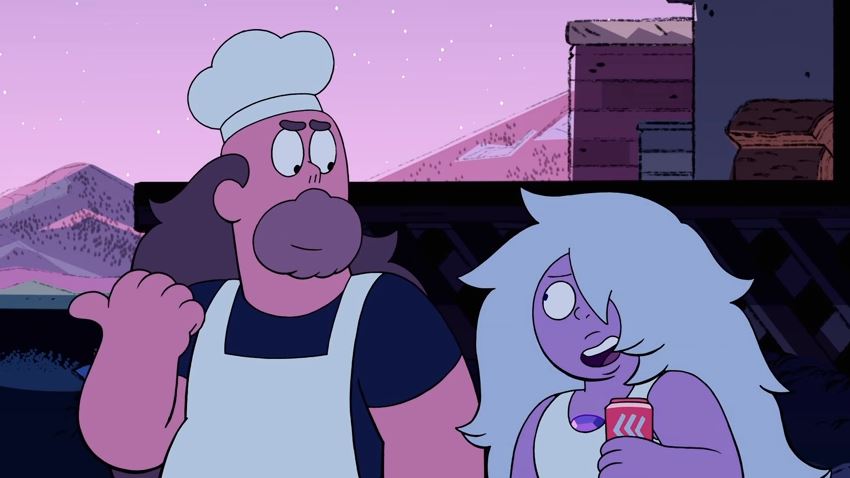 The Recap: Greg and the Gems take Steven out for a weekend vacation, hoping to figure out what’s been bothering him; Steven is busy worrying that Connie hasn’t texted him back.

Well, I think I’ve spotted the thruline for this run of episodes. Place your bets on whether Connie’s been captured, or is on some journey of self-discovery, or…something. I profoundly hope it’s the latter—while it’s not the crew’s fault that new episodes are released so far apart, it’s still been multiple release windows since Connie or any of the human female characters go to do something relevant to the bigger plot. Meanwhile, Lars, Steven, and Greg have all been quite prominent; something that would feel far less obtrusive with a consistently released season rather than random projectile releases of Steven Universes.

The marketing for this show is starting to actively hurt it.

That complaint out of the way, the new tack of attempting to reconcile the Gem and human plots is continuing to work. It’s more tongue-in-cheek here than usual, which is a much-needed breath of self-awareness. No, not everything comes down to something that happened long ago—the best beat in the episode is when Garnet attempts to transition into one of the show’s stylized flashbacks, only for the paper cutouts to slump in disappointment when Steven proves unimpressed.

No, sometimes things are down to good old teenage angst; they have to be, to keep things from getting too melodramatic and difficult to invest in. Steven’s grasped that he messed up, so it’s not like he’s harping on this because he wants her to hurry up and stop being mad. It’s just a relatable sort of impatience: knowing that people have the right to be mad but forgetting, in the grip of anxiety, that sometimes that means giving them space for a while.

It’s an agonizing feeling, well-captured by Lauren Zuke and second-time contributor Madeline Queripel’s harried art and tight close-ups. Not just for Steven, either; it’s a rare dip into the helpless feeling of wanting to be a supportive parent/mentor to a kid who isn’t ready to open up. Brief true-to-life expressions, like Steven’s brief joy at the thought that Garnet’s intuited what’s wrong, sell the quiet pace of an episode that’s (practically speaking) spinning its wheels before getting back to the more substantive fallout of the Homeworld visit. It’s crucial to reestablish the family dynamic of the Crystal Gems now that they’re together again, and the original Gems have likewise had little to do.

I’ve long stated that the show lives in the quiet, reflective moments, which help give meaning to the sturm und drang space battles. But we’re five seasons in now, and at some point the show has to coalesce into a unified whole (which also means not introducing new elements/characters but bringing back and resolving old ones). Otherwise, the show runs the risk of ending up like Lost, with more mysteries and unresolved threads spread out over such a long period of time that they can’t possibly be wrapped up in a way that balances out the audience’s emotional investment.

There was always time to bring those things together in the past, making the separation of those two parallel narratives easy to shrug off as part of a long-term plan. Over 130 episodes in, with things apparently coming to a head, I’ve begun to worry that the show waited too long to begin bringing all of its elements together. Still, these two episodes have at least shown that the two story elements can be brought together naturalistically rather than with contrivance. What remains to be seen is whether there’s enough time for that combination to yield a stunning third act.

Next episode features the return of fan favorites Peridot and Lapis for the first time since the excellent “Room for Ruby.”

Vrai Kaiser is a queer author and pop culture blogger; some of these are gonna be shorter, and they’re sorry. You can read more essays and find out about their fiction at Fashionable Tinfoil Accessories, listen to them podcasting on Soundcloud, support their work via Patreon or PayPal, or remind them of the existence of Tweets.