I need to help this random stranger! 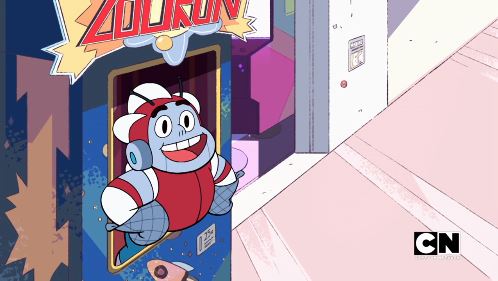 The Recap: After accidentally breaking Mr. Smiley’s fortune telling robot, Steven agrees to fill in to pay for the damage. While he’s able to help just about all of his friends in Beach City, he’s stymied by a melancholy stranger who’s come to town looking to make amends.

Of all the “breather” episodes of Steven Universe, this one feels the most like a traditional slice-of-life story: we’re peeking through a window into a crucial moment in someone else’s relationship, and we may only ever get to see this one small piece of it. It feels like we’re getting a full story, emotionally speaking, because of the warmth and familiarity Brian George (whose character is pretty charmingly designed as the extremely British combination of Neil Gaiman and a sad mop) and Colton Dunn bring to the script. While this season and last have been about Steven starting to grow up, this is one is fairly unique, focusing on a mundane falling out and old regrets without any magical element (almost).

When it comes to the “breather” part, at least for Steven, the joy here is in seeing him get a few nice, uncomplicated wins. As it turns out, when people come to him looking for advice he’s a pretty sweet, insightful kid who’s able to make just about everyone who talks to him happy. And while I’ve loved the recent run of episodes showcasing the downsides of Steven’s desire to help, this is a necessary balance, and feels particularly well-placed in the aftermath of “Mindful Education.”

It’s nice to see everyone in a better place after the last run of townsfolk episodes, even in cases where Steven managed to temporarily make things worse. They’re bite-sized scenes, but moments like the Frymans all getting along as a family or Lars actually being a decent human being to Sadie contribute to that lived-in feeling of the town–though it is quite interesting that we spend most of this episode with Steven in a “Rose-like” position, observing the people who come to them and offering them advice with the advantage of seeming like a trustworthy source (since, for some reason no one recognizes him?). The Zoltron costume is cute too, its rounded edges and facial lines recalling a soft Astro Boy or Mega Man style of robot.

As for the story of Misters Smiley and Frowney, it’s remarkable in precisely how mundane it is. SU has dealt with complex adult issues before, often in regards to Rose, but there’s usually some element of magic laid over top. This, though, is just a case of poignant loose ends. We’re given just barely enough to understand that there was a relationship, and it ended when the two couldn’t reconcile. The rest– were they friends or lovers? an act for a year or a decade? a financial success if not an emotional one?–is left as unspoken background detail, and it works. It feels real and bittersweet without falling prey to that narrative trap where the spotlighted character of the week spills all their deepest, most painful secrets to the protagonist.

It might be just a little bit cheap to bring Garnet in to solve the problem (albeit secondhand), giving a push to a scenario the characters probably wouldn’t have actively solved otherwise (so there, I suppose, is our magic element). But it’s also true that SU has always been a hopeful show, dedicated to showing that no one is too broken to begin piecing themselves back together, even if it’s slow, sloooooooooow going. It feels just as cheap to demand the supposed realism of a melancholy misconnection in a show where Steven hugged the giant Gem time bomb in the Earth’s core into submission.

The final reconciliation is gentle and pleasant, if a bit strangely abrupt at that final parting. And this marks yet another comic background character given a bit of emotional heft. Every time I think we’ve accounted for everyone, there’s someone else I’ve ended up forgetting. Which I guess means we can look forward to that Nanefua-centric episode any time now.

Schedule land has once again gone opaque–Wikipedia previously listed new episodes through at least the end of September, but at time of writing it’s gone blank again, with this the most recent of the named episodes. Which might mean that editors don’t want to mislead people, or might mean that Cartoon Network did one of those things where its scheduling department collectively throws up its hands and runs down the hall, screaming and lighting interns on fire before deciding we should wait another eight months and then get two seasons in a block. Either way, I know I’ll be there with bells proverbially and literally on, and I hope you will too.

Vrai is a queer author and pop culture blogger; their daily intake and outake of salt has been quite high this week. You can read more essays and find out about their fiction at Fashionable Tinfoil Accessories, support their work via Patreon or PayPal, or remind them of the existence of Tweets.