Estelle. Singing. This is not a drill. 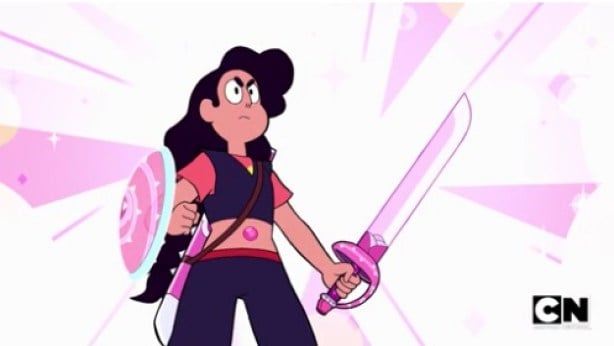 The Recap: Garnet helps Steven and Connie learn to communicate their problems more openly, so that they can maintain a better fusion. While this helps Connie, Steven is troubled by bigger ghosts of his recent failures to help various Gems.

There are few things more refreshing than seeing children’s media acknowledge that feeling negative emotions is a part of life. Taking a tack not dissimilar to Inside Out, the show uses visual metaphor to deal with complex, intangible emotions. The resulting sequences, with help from guest animator Takafumi Hori (from Studio TRIGGER of Kill la Kill fame), are beautifully fluid and shifting with a wonderful attention to detail.

The way that the butterflies (already a common symbol of death and rebirth in anime) are animated as solid, almost crystalline objects when they represent a single worry, becoming a shifting and overwhelming maelstrom as they literally get away from the characters, is wonderful visual storytelling. Add to that the sharp contrast between the threatening red-oranges and calming green-blues of the episode’s two emotional states, and one or two really on-point Ghibli homages, and this episode is playing a stacked deck of emotional impact. And we haven’t even gotten to the musical number.

“Here Comes a Thought” was debuted as a demo during SDCC, where Rebecca Sugar described it (pardon my paraphrasing), as a song she’d written to work through some difficult emotions. I hadn’t imagined the song would make it into the show with such 1:1 context, but it makes for a great duet. It’s also the first time Garnet’s really sung since “Stronger Than You,” which makes comparing the songs a temptation–while one is a fight and the other a meditation, both are decisive and unshakable, reflections of Garnet herself and the hard work she puts into remaining so balanced. Those previously mentioned butterflies make a small nod back to “The Answer,” only to turn into yet another comparison of how Ruby and Sapphire each handle problems differently but manage to be there for one another nonetheless. It’s also the first time we’ve heard Stevonnie sing, which is huge as far as them beginning to figure out who they are as an individual (I might’ve teared up a little, as someone whose voice regularly gets them gendered, at hearing Stevonnie sing soprano).

It’s a soothing, wonderful sequence, and the fact that it can fix Connie’s small immediate problem but not Steven’s buried ones sneaks an important lesson in as well: coping mechanisms are important tools, but they aren’t cure-alls. Some things are always going to take more time, and maybe they won’t ever go away. Steven’s fears and regrets are deeper than Connie saying “you had no other choice,” and just acknowledging them isn’t the end of it. Underneath it all, he’s still tormented by the fact that he isn’t Rose.

But being able to live with the fact that we can hurt others without meaning to is hard, especially for kids–and let’s face it, it’s often much easier to draw some arbitrary line saying someone is The Worst and discard them forever, regardless of how they grow or try to fix their actions later (I don’t mean to harp on fandom all the time, since it’s so often a healing and uniting place for people; but good lord, when it’s bad it is bad, and mob mentality tends to follow). Steven wants to be a good person, but no one can be good all the time–especially not in a war. It’s something every member of the Crystal Gems has had to face in some way, and it seems that it’s now a part of growing up. Knowing you’re going to fail, and trying anyway.

The question now becomes whether that will be the end of Bismuth, Jasper, and Eyeball’s appearances, at least for a good long while. If Steven has to accept that he has to let his past experiences go, it would take some of the oomph out of it to have a second chance come right along as a “reward” for figuring that out and sort of undermining it in the process. But the first two, at least, are far too important to stay in bubble limbo forever. Particularly with Jasper and the question of healing corrupted minds, or Bismuth and what scenario might arise where drastic measures might again be necessary.

It’s easy to get back into a conspiring mindset now that the episodes have returned to a weekly format, only to have to step back and remember that Lapis and Peridot had barely become roommates this time last season. There’s still time to build back up to that big space opera story again. Next week involves Steven working as a fortune teller, which makes me want to call breather episode…but you know how those things go at this point, I’m sure. See you there!

Vrai is a queer author and pop culture blogger; their life could use a few less butterflies. You can read more essays and find out about their fiction at Fashionable Tinfoil Accessories, support their work via Patreon or PayPal, or remind them of the existence of Tweets.