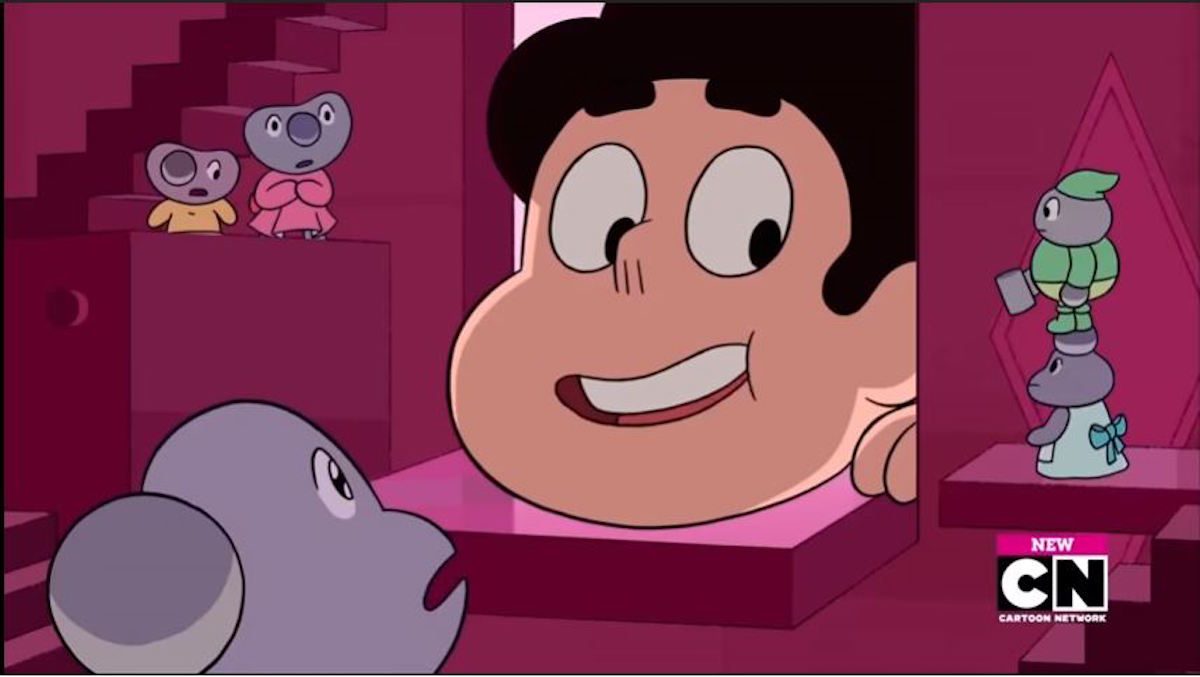 The Recap: Steven attempts to talk with the Diamonds but can’t get more than a few minutes alone with them. Hearing Pink used to throw parties for the court, he decides to resurrect the tradition and use the opportunity to get everyone in the same place.

While the current arc technically began with last week’s episode, “Familiar” feels like the proper beginning leading up to the “Battle of Heart and Mind” TV movie (?) at the end of January. It’s a series of deliberate non-starters meant to lead Steven to his big declaration at episode’s end, the inciting intent (if you will) that will unfold into a proper plot.

As such, it’s one of those episodes that’s a bit frustrating to review on its own, because it’s basically all set-up. On the one hand, the immediate details work well. The vocal cast is on point, as always, and it’s a treat to be able to hear Patti LuPone in particular for more than a few lines. The colorists and background artists are doing the same fine work they’ve always done, giving a different visual feel to each Diamond’s space both with the monochromatic palettes and distinctive spacial designs.

As is often the case, the titular song is the highlight of the episode. More than most, “Familiar” feels written to highlight the deeper register of Callison’s voice, and his performance brings a warm maturity that is intensely satisfying to listen to if you’ve been following the show over the years. Even if the words don’t always connect, his performance conveys the weight of Steven’s growth. It’s heartfelt and resonant, one of the show’s best in a while.

There are two narrative layers going on in this episode: a character-driven narrative about Steven using his growth as a person to heal a dysfunctional family, and a broad-scale one about how the Diamonds run a brutal dictatorship. Trying to get those two things to gel is quite the task.

And to their credit, I truly think the writers are trying their damnedest—taken in a vacuum, Steven’s interactions with the Diamonds and the lead-up to his decision rolls along well, and there are a number of deliberately placed moments with the living architecture meant to give the viewer an uneasy feeling. From Steven’s uneasy laugh line about the Diamonds being busy dictators to his determination to use a party to stop their reign of terror, the story is trying so hard to keep focus.

But the weight of time weighs heavily on the story we’re going into—there’s a reason that this type of story tends to begin in the shoes of the naïve youngest royal thoughtlessly perpetuating the system before learning of its horrors, because it gives time for the audience to get to know the soft, human elements of the characters before being forced to reexamine them through the lens of their crimes.

“Familiar” has essentially asked for a do-over in that vein, at least with this episode. But the audience has spent 100+ episodes having it hammered in that Homeworld is a brutal caste system that perpetuates untold horrors on its citizens. There is a hell of an emotional gap between that and “detached, misguided royals who aren’t as close as they wish they could be.”

Two of the shows Steven Universe draws major influence from, Revolutionary Girl Utena and Sailor Moon, both had intense empathy and even redemption for secondary antagonists but eventually hit a wall where the big bad who represented the corrupting, toxic system couldn’t simply be talked down. It could well be that that’s where this arc is going as well—the show is no stranger to bittersweet undercurrents about growing up, even if it holds on to hope.

That’s a lot of “ifs,” but the fact that we’re getting a whole arc at a consistent pace for the first time in a long time makes me inclined toward hopefulness. There’s been conflicting information about whether “Heart and Mind” is leading into the show’s endgame or if there’s a long road ahead—either way, the resolution of this arc will make or break how successful the show’s overall tone is, as it finally tackles the crux of its conflict.