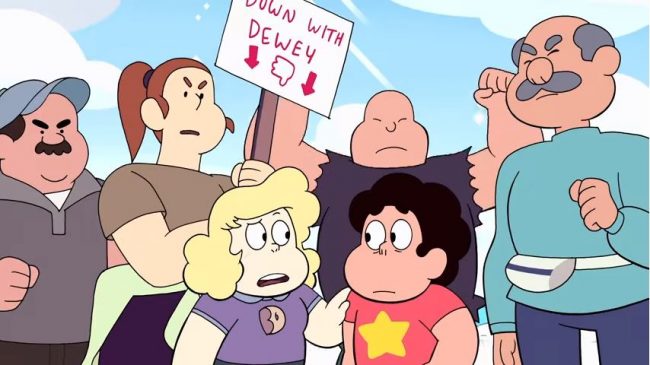 The Recap: The town deals with the aftermath of Steven’s trip to space. Agitating for change, Nanefua Pizza runs against Mayor Dewey on a platform of change rather than stasis. Steven, meanwhile, has a falling out with Connie.

Did you know Steven Universe is back? I wouldn’t blame you if you didn’t! The show’s return was advertised via a YouTube clip several weeks ago, and today five new episodes were released all at once on Cartoon Network’s (frankly clunky and irritating) proprietary app. Television air dates will supposedly be announced at some other time. See? How could you possibly have missed what is certainly not the most misled marketing I’ve ever encountered in my years as a television critic?

Pacing has become an odd thing for up-to-date Steven Universe fans. The last bomb, five episodes focusing on Steven’s trip to Homeworld, aired almost six months ago. Meaning this new five-episode block, while technically not a season premiere, have to essentially reintroduce us to the world and emotional states of the characters. The Crewniverse has clearly learned to write for this format, essentially clustering together a string of miniseries, but there’s something saddening about the entire show finding itself restructured on the whims of corporate executives, even if it’s an old and familiar song.

The episode wisely starts with Connie, one of the prominently dangling threads of the previous arc. She’s angry with him for surrendering himself, feeling betrayed because she thought they were a team, even if it wound up being the right thing to do. The episode spells this particular lesson out bald-facedly at the end of the episode, which isn’t such a bad thing given that there are plenty of subtextual tensions going on as well.

Communal versus personal responsibility is the central theme of the episode, both for the citizens of Beach City and Steven and the Gems. The mayoral election isn’t especially well set up and runs on emotional logic, but then this is apparently a town with only a few dozen people living in it—which is key to making the script’s thesis of “everyone is equally responsible, and we should all keep track of and care about each other.” While the philosophy of it can be applied to broader conflicts, everyone doing their share isn’t exactly going to take down the entrenched tyranny of Homeworld; yet at the same time, the grassroots resistance (the Crystal Gems) that can be responsible to one another are a key part of beginning to fracture that oppressive system.

While all of that’s going on, Steven’s fallen into the grips of his martyr complex, which is part of what alienates him from Connie. He did the right thing and it worked out, so that means everyone’s fine, right? Well…no; success doesn’t immediately wallpaper over the cost of achieving it. Connie has a right to be upset regardless, especially given that Steven just as easily could’ve gotten himself and a lot of other people killed. It’s a small thing here, but it’s still falling into the idea that the ends will justify the means…a mentality that here pushes Steven closer to his mother without seeming to realize it.

It doesn’t help that he spends most of the episode around Dewey, someone historically happy to renege on any and all responsibility. It opens the door for Steven to make everything his problem, a move that naturally seems like the most noble possible move for a teenager. But he’s not alone, and it’s dangerous not only to him but those who care about him to act like he can solve everything alone.

The episode ends on an inconclusive note, as I’m sure you’re all used to at this point. While this run of episodes seem to be more toward the “interpersonal/episodic” end of the show’s spectrum, there also feels like a paradigm shift at hand. This might’ve been a Beach City episode, but the effects of Homeworld’s actions are an overt presence that the mundane characters are reacting to. It’s a solid change, and hopefully this season will improve that balance as it ramps up to some kind of resolution (whether for this arc or the series).

Next episode sees the return of Greg. See you there, as fast as my fingers can type.