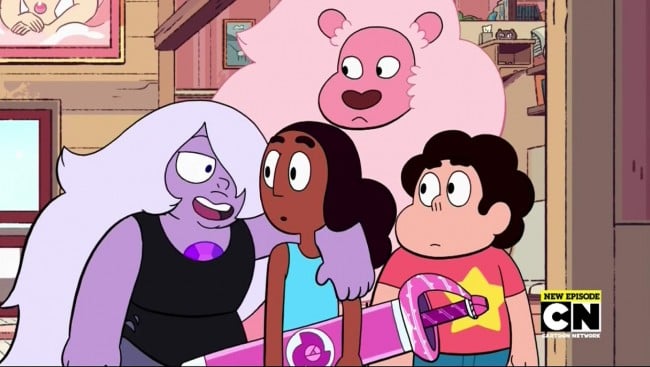 The Recap: Amethyst is put in charge of Steven and Connie while Garnet and Pearl go out looking for Jasper. Unfortunately, Jasper comes to Beach City to pick a fight instead. Amethyst takes a beating, shaking her self-confidence, while Stevonnie is able to drive Jasper away.

Trying to have a pleasant day in Beach City is now apparently equivalent to announcing you’re three days from retirement. The brief breather of afternoon training, in which we finally get to see Connie hang out with Amethyst and get a call back to Amethyst’s combat advice way back at the beginning of the series, is pretty quickly shattered by Jasper’s arrival and what amounts to a declaration of war.

Jasper’s appearance here has made one thing clear: whatever might happen to Jasper down the line, for now there’s no reasoning with her. Strength and violence are the only things she understands, and while that might lead to her being willing to reconsider her worldview if she were to acknowledge that the Crystal Gems are stronger than Homeworld, for now what it means is that she really needs to be punched. Repeatedly. With heavy objects (it’s quite interesting that, in keeping with the theme of “Beach City Drift,” Stevonnie is coolheaded and strong enough to see through Jasper’s bluster, offering to accept an apology but refusing to back down from a fight; they’re slowly becoming their own character).

While Peridot was an unthinking parrot of Homeworld’s caste-based propaganda, Jasper knows how to wield it as a weapon. Her fight with Amethyst is as much a matter of psychological as physical warfare (I suspect there might be a “protesting too much” element to Jasper boasting about the strength of her kind, but now is not the time). And speaking of…

One of the nice things about coming back to Beach City has been a chance to recenter and give the spotlight to characters we haven’t seen in a while. At first, that meant the members of the town. Now it seems we’re heading back to one of the show’s most neglected Gems, who is well past due for a check-in.

Amethyst had been doing so well this season, a far cry from the bristling insecurities of early episodes, that it was easy to assume she’d just sort of “gotten over” her issues. That’s how TV has historically worked: someone has their Very Special Episode and then, as if we are infants free of object permanence, it wanders offscreen never to be spoken of again. Which fails to account for the often frustratingly slow progress, ruts, and backslides of real life.

And there has been growth–Amethyst has been able to give good advice to both Steven and Peridot, and to grapple better with subjects that would’ve made her lash out before. But her issues have always been tied to feeling unwanted. While Jasper’s insults might not have been world-shattering on their own, the fact that Amethyst was easily poofed while the pair of kids she was supposed to be taking care of stepped in to save her seems to have dug up all those old uncertainties. Michaela Dietz nails that final line, playing Amethyst’s words as a war between her nonchalant veneer and the destabilizing fear underneath; and the design on her latest reformation is telling in its own way, presenting the most “stripped down” look Amethyst has ever worn.

The title of the next episode (“Steven vs. Amethyst”) seems to suggest that Amethyst’s struggles will stay in focus for a while, maybe even the rest of the season. Which is only fair–Amethyst is one of the show’s core cast, and most of her interplay with the rest of the cast lately has been focused on the other person. She deserves a chance to finally talk through the issues that were brought up in “Too Far” and used as weapons here. She deserves to have her chance to struggle and be supported by those around her. And I will be both surprised and highly disappointed if Peridot isn’t around to return her advice about liking someone for who they are, not who they could be.

A brief word of good news for those of you who haven’t heard: it seems that once the Steven Nuke has finished, the show’s going to go back to airing on a weekly basis! It isn’t clear how long that’ll last, or what this means for the show as a whole. To the best of my knowledge they were renewed through five seasons, and at this pace it seems as if that could be the endgame the crewniverse discussed at SDCC – but that’s all vague speculation. But nonetheless, I’ll be happy to see it through with all of you. And to have a chance to recap this wonderful show at a slightly less breakneck pace. See you tomorrow!
Want more stories like this? Become a subscriber and support the site!

Vrai is a queer author and pop culture blogger; they did not expect their early comparisons between Jasper and Vegeta to turn out so accurate. You can read more essays and find out about their fiction at Fashionable Tinfoil Accessories, support their work via Patreon or PayPal, or remind them of the existence of Tweets.