"Seriously, give the Crewniverse an Emmy," ROUND TWO. 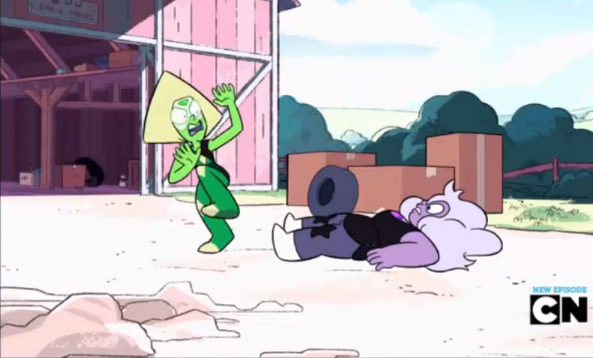 The Recap: Peridot tries to impress Amethyst by being funny but winds up doing more harm than good when her Homeworld mentality starts creeping into her comments.

I don’t often bring this up, partly because I figure we’re mostly weird adults of some stripe and partly because I’m not entirely sure what this show’s target demographic actually is anymore (8-14?), but this is a really great episode for kids. Like, amazingly good, and a much subtler take on the whole “trying to be popular leads to cruelty” plot than you often get. Even this show tried it before to lesser effect in season one’s “Lars and the Cool Kids,” which suffered from being a bit closer to boilerplate as well as the fact that Lars episodes can be … rough. (I truly do like the character, but it seems like the writers took longer in finding a groove for him than anyone else in the cast.)

The difference here ends up being how well we’ve gotten to know the characters on all sides and the amount of subtlety that allows the episode to play to, both for the theme and the excellent character development. When Peridot latches onto the idea of being “funny” it’s not just out of a nebulous desire to be part of the “in crowd” but a lonely terror born out of being unmoored from an extremely regimented system. And while most episodes that tackle this sort of plot resolve by having the uncool kid reject the false friendship and go back to their uncool friends, “Too Far” is interested in a more nuanced set of emotions. These are characters we know, and ones that are going to carry on in close proximity. They can’t just hurt each other and then shrug it off, happy to never see each other again. And because neither major player is introduced just to set up the lesson, we can have emotional investment on both sides.

We know, after all, that Amethyst is still working through some deep self-loathing and anger; moreover, early season one Amethyst had her own streak of meanness in her sense of humor, and putting her against Peridot throws into sharp relief how much Amethyst really has grown, despite ostensibly still being the “teenager” of the group dynamic (compare her jokes here to, say, “Tiger Millionaire”). She’s not perfect—once she and Peridot start working each other up, Amethyst is perfectly happy to listen to mockery about the other Gems and even Steven, and only calls it to a halt when it’s her personal issues on the line—but then, no one can be expected to be perfect. And even her anger is far more under control than in the similarly themed “On the Run,” where she went into a full-on destructive rage against Pearl.

As for Peridot, we once again have her being casually bigoted (that Garnet episode is gonna be a doozy, friends) based on Homeworld beliefs, with the added factor that she’s now getting a positive reaction out of them. The escalation over the course of this episode is pretty familiar to anyone who survived adolescence: a desire for attention becomes exaggerating one successful maneuver until you overstep the bounds, followed by bewilderment as to why it isn’t working anymore. It’s painful to see the obliviousness on display at the Kindergarten, up to Peridot ignoring Steven’s embarrassment in the name of scraping together a little approval. And the plot both condemns Peridot for her words but offers understanding for how she got there, providing a far more relatable roadmap for a young viewer than many of its narrative ilk.

Beyond the whole “don’t tear others down to make yourself feel bigger” plot, the incorporation of humor into the plot lets it double as a mini-lesson on jokes. There’s a theory that all humor comes from some kind of pain, be it emotional or physical. And that becomes coupled with the idea of “punch up”—basically, that since comedy has historically been the one tool of the powerless against the privileged, that truly good comics speak truth to power in some way. SU is something of a branch off of that, preferring humor that’s gentle, fond, or self-deprecating in general, which is part of what makes it so appealing. That gets something of a workout through Peridot—a character we’re watching become kinder but who’s still kind of an awful brat in a lot of ways.

Peridot’s jokes do initially seem to come from the powerless—she’s literally tied up, after all. And the stuff that makes Steven and Amethyst laugh stems from the fact that Peridot has a weird, unique lens on how she views the world (notably, here, inanimate objects). Even when she’s initially ranting, the joke is her own anger at her situation (“everything is annoying”)—it’s an accessible emotion if not a specific situation, and the extremity of it, from the outside, is what’s funny. The comic as their own joke (even if that’s not Peridot’s intent, which is gonna get her in trouble in a second).

And then, the individual targets start. Peridot’s comments about the Crystal Gems are funny, to her, because she knows how things “should” be in Homeworld society. The joke is that Garnet, Amethyst, and Pearl are abnormal, and apparently too dumb to know it. With Steven, that gets mixed with his human biology, something that isn’t a behavior but a very part of his being. It’s part of who he is, intrinsically, and so there’s the feeling that Peridot is calling his identity faulty. And when it comes round to Amethyst, there’s both operating from the superior position (knowledge of Homeworld – this is another episode where things we technically knew become important by way of personal context) and the implication that the target of the joke is wrong by their very nature. Peridot slowly shifts until she has, by words and knowledge alone, the position of power (she’s gained power as a voice being listened to, despite ostensibly being a “powerless” prisoner – her power is her valued opinion), and that’s when her jokes stop being funny.

All of that’s subtextual stuff, of course, but it’s hugely relevant to the cultural conversation about how jokes are told and when humor is making an incisive comment about a painful issue and when it’s just silencing a subjugated group. It’s difficult stuff even for adults, and with the ever changing way people communicate it’s certainly not going to change when the kids watching this show grow up. So kudos to the show for introducing the concept.

Speaking of Peridot, this is also an occasion of two firsts for her: she throws herself into danger to save Amethyst, and she makes an actual heartfelt apology (she was making an effort with Pearl, but this episode makes it clear that there’s a lot more to do there in the respect department). While I fully expected Peridot to make a sacrifice for the Gems at some point, probably earning a new design in the process, I hadn’t expected to see shades of it so early. In fact, this whole pairing was one delightful surprise I didn’t see coming.  It makes perfect sense in retrospect, of course—both characters are more sibling-like to Steven than the maternal Pearl and Garnet, and the jock/nerd dynamic is leveled by their similar easy-to-rile, prank loving (and attention seeking) personalities.

While they could easily have brought out the worst in each other, as they briefly do here, the honest baseline they end up on might just turn out to be something the other was missing. The final few minutes are too sweet and earnest, the very epitome of SU’s gentle heart, not to build upon. Peridot fusing with someone seems pretty inevitable at some point (though not, at the very least, until she learns proper respect for Garnet and the importance of fusion as a concept—how amazing would it be if Stevonnie was involved?), and I’d say Amethyst just bypassed Steven as the most likely candidate. Whether that’s as a friend or as something more … well, the longtime anime fan in me has seen far too many results of that “awkward tackle” trope not to have one eyebrow (approvingly) raised.

And…that’s it. Barring any last minute news that hasn’t made it to my ears yet (which isn’t outside the realm of possibility—this week’s episode aired later than usual, for instance, and CN didn’t bother to inform the crewniverse), this is the last episode of 2015. What a precipice to pause upon. The next episode, whenever we see it, will either be “Super Watermelon Island,” a standalone episode that’s been continually pushed back for the sake of this Peridot arc; or “Gem Drill,” which I imagine will be the Garnet and Peridot bonding episode. Well, I say bonding. What I mean is, Garnet steps up from her “having the best one liners” role this episode into “truth bomb verbal beatdown” mode. Because Garnet’s a downright saint this episode, listening to Peridot trash something integral to her life philosophy with her usual stoicism, but she can’t and shouldn’t have to put up with that forever. You’ll pay for your whole seat, but you’ll only use the edge!

I’ll certainly see you when new episodes begin again—though I have a few ideas up my sleeve, so it might not be so dire as radio silence until then. And if you find yourself missing my loquacious ridiculousity too much, you can always come watch me recap the 90s classic Gargoyles in the meanwhile. Either way, stay safe out there. Until we meet again, readers.

Vrai is a queer author and pop culture blogger; they find the fact that Steven Universe is on hiatus but Gravity Falls is not way more indicative of a weird multiverse fusion than that whole Berenstein Bears thing. You can read more essays and find out about their fiction at Fashionable Tinfoil Accessories, support their work via Patreon or PayPal, or remind them of the existence of Tweets.