The first time I drove a car did NOT look like that. 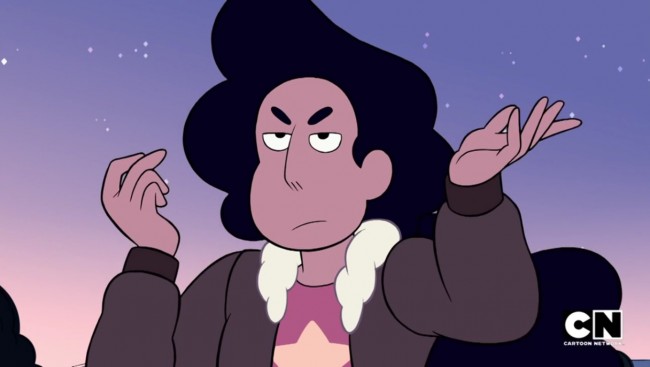 The Recap: Steven and Connie fuse to take on their old nemesis, Kevin, and beat him in a race.

In the grand scheme of things, this is only the second episode where we’ve met Stevonnie. They showed up for a few seconds in “We Need to Talk,” and I wouldn’t be surprised if Steven and Connie have fused when they’re “off-camera,” as it were. From that point of view, of course the subject of this episode would be more or less a direct sequel to “Alone Together.” It’s also been about eighteen months since that episode aired (and about fifty episodes), which means there’s something of an air of “wait, we’re still talking about this?”

At the rate the show’s been escalating, I half-expected that the next time we saw Stevonnie would be in combat. And while this feels like something of a cul-de-sac, narratively speaking, I can appreciate the story they’re trying to tell here. Most shows that try to tackle the theme on offer here – that you’ll be happier if you rise above and ignore the bully – wind up in the situation of failing to acknowledge that some battles need to be fought, and some people are worth taking a stand against.

SU has the benefit of nuance on its side. The acknowledgement that fighting has been necessary (see: Malachite) without giving up a commitment to peaceful resolutions and open communication, plus what I think might be a budding run of episodes in which Steven’s attempts to fix things don’t apply to all situations, means the crewniverse is ideally situated to tell a story like this as an individual case study rather than a blanket statement. And this is an all-ages show, at the end of the day. I don’t fault them for wanting to tackle this subject, particularly with some of the underlying themes.

As with “The New Lars,” there’s a heartbreaking layer of real-life at play in the first part of the episode. Connie’s reaction to Kevin’s gross behavior is in line with her contemplative outlook, but there’s also an element of socialization already that she, as a young woman, is just expecting guys to be casually awful and disrespectful of her boundaries. She’s probably seen it day in and day out. She wants to say something to make Kevin think, but she doesn’t know how to bridge that gap of basic day to day experience. Of course not. Even a lot of adults don’t know how.

Steven’s reactions are largely just him being Steven – he’s seen an injustice in the world and wants to correct it. But he’s also a young man, and almost certainly never been in that situation before. Stevonnie might be nonbinary, but they get read as female, and treated as such. The pair have a fundamental split in viewing it as a single opponent to be bested versus a system of behavior.

There’s no way one fusion, one anybody, can defeat a whole system all by themselves in one race. Florido and Zuke know that, so instead the turning point centers in on how this awful experience has affected Steven and Connie’s actions. The tone of Connie’s voice (we haven’t seen Grace Rolek in a while, and she really sells the heavy content here) makes it clear what this means – they’ve done something very personal and trusting not for themselves but because of some jerk. Fusing became a means to an end instead of the experience Garnet advised them it should be. They’re far happier finishing the race for the joy of it, as an experience, than worrying about Kevin.

And within the parameters the show sets up, that solution works. Kevin isn’t the representative of a global threat. He’s one person who’s not really a threat beyond generally being unpleasant, and Stevonnie can cut him out of their life and be far happier. Part of what sells it is Kevin’s faux sob story, delivered in a manner Stevonnie is prepared to buy before he yanks it back; one of the show’s greatest strengths has always been that it holds the belief that anyone can change for the better, tempered by the knowledge that a sad backstory is meaningless without a commitment to that change.

Stevonnie’s choice to walk away is a great lesson about picking your battles. They had a great time, and there’s no doubt that both of them will continue fighting injustice in the world. But why invest time and emotional happiness in a person who’s utilizing nasty behavior for attention, and wouldn’t be interested in changing even if they knew or cared how their behavior harms other people? It’s a pleasantly nuanced take on a subject that frequently winds up at extremes, and one that the current generation will have to learn – social media isn’t going away, after all.

I’ve found myself talking more on theme than technical elements this time for the simple reason that I’m fairly ignorant of the series getting a pastiche this time around. The contrast of the vivid, drifting lights against the dark of the road is certainly lovely, and the comparative shot of Stevonnie appreciating the (bright, starlit) view while Kevin can only see the (dull, unfocused) goal is a really great visual contrast. Heck, Ronaldo even gets some great one-liners, leading me to suspect the writer’s have finally got a handle on how to use him as a background character if not a full episode subject.

But I confess, all I can see when I look at that car is, “I hope that when it eventually crashes in some heroic feat of derring-do, we get a really good Cagliostro homage out of it.”

And that’s week one of the Summer of Steven complete! Next week we start with a few more Beach City Resident check-ins, while the back half looks to be some pretty heavy Gem content. Have a great weekend, readers. I’ll be here trying to come up with a portmanteau for Jasper that might possibly match the aural pleasantness of Peridemption.

Oh! And if you haven’t seen the sum-ups or the video from the SU Comic-Con panel/sing-along, it’s well worth looking into. Rebecca Sugar talking about why the show’s representation is important to her and publically coming out as bisexual was an especially moving moment.

Vrai is a queer author and pop culture blogger; funnily enough, they also haven’t seen a bed in six days. You can read more essays and find out about their fiction at Fashionable Tinfoil Accessories, support their work via Patreon or PayPal, or remind them of the existence of Tweets.