Steven Universe Recap: “Change Your Mind” Feels Like the End of the Road 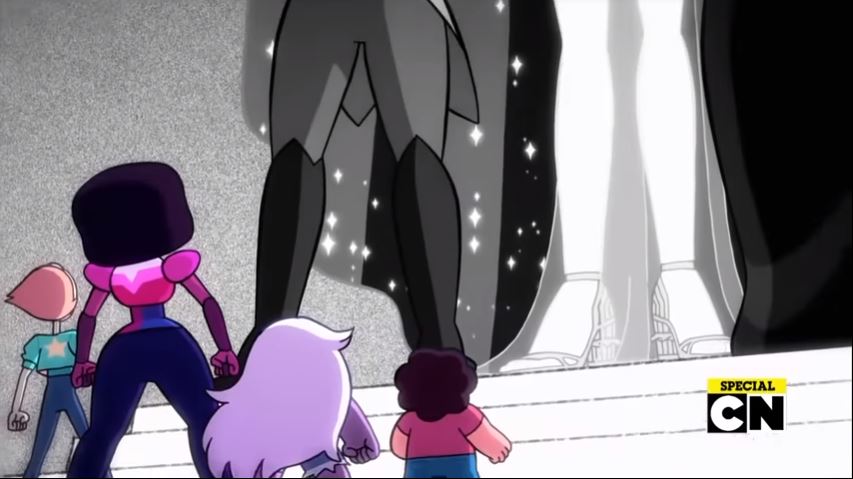 The Recap: While he’s able to sway Blue and Yellow Diamond to his side, Steven finds his escape from Homeworld blocked by White Diamond. Still determined to speak to her and save the corrupted gems on Earth, he slowly makes his way to her ship for a final confrontation: with White, and with himself.

This certainly had the feel of things coming to an end, didn’t it? There is some dispute as to whether the Crewniverse is contractually obligated for a season six, and a movie has been confirmed for release in “late 2019,” but … well. When an hour-long special closes the book on the show’s major antagonists and ends by mirroring the final shot of the show’s opening theme, it’s hard not to call it an ending of sorts, even if more content arrives at a later date.

As a finale, it’s in fine form. Nearly half of the episode is dedicated to an extended escape/chase scene, with boarding contributions from nearly every major storyboarder (including Ian Jones-Quartey, who left the series to work on OK K.O.!). This leads to some truly dynamic action beats and creative use of cross-cutting, excelling at small moments within the grand scope of the action.

The other component of the first half would not be incorrectly called “fanservice,” but that feels unfairly dismissive. Yes, speculating about fusions has always been one of the fandom’s favorite pastimes, and you can almost feel the creative glee as the show whips out some long-held mysteries in unexpected forms—I don’t think anyone expected Rainbow Quartz 2.0 to be Taako, From TV, or for Sunstone to embody an old “Sonic Says” segment—but it’s about perfect for the combination of optimistic Steven and wise mentor Garnet to be a walking Very Special Episode, and touching to see Rose Quartz be the only gem fusion to have a male voice actor, with Pearl’s series-long shift toward masculine presentation.

It’s probably fitting that Peridot’s new design includes glasses that are an homage to one of the most famously emotion-driven anime out there. All the little touches are things fans have been clamoring to see, sure, but they’re also signs of growth for the characters or building the themes of connection and trust that distinguish the Crystal Gems from the Diamonds. It’s a big old feels-fest, and the emotional logic is sound. 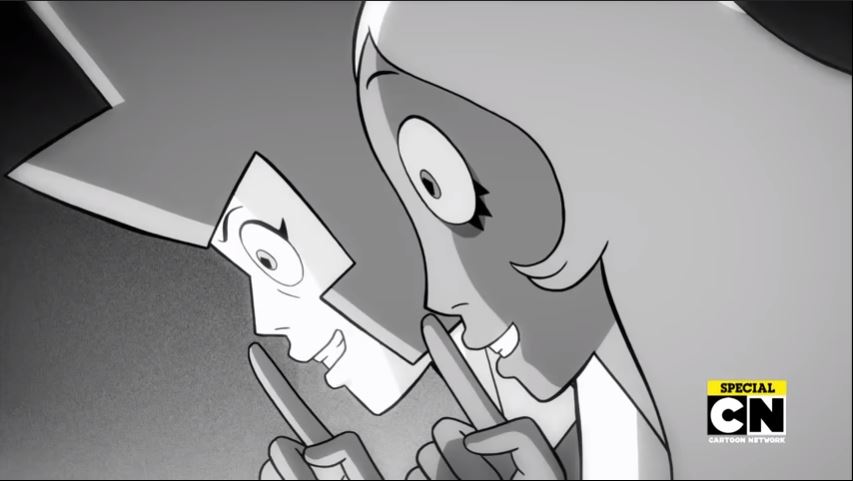 It goes from “sound” to “conclusion-sustaining” once Steven reaches White. Christine Ebersole is the last of the diva triumvirate, and she is terrifying. Her dialogue also marks the plot’s full-bore departure into its broken family unit metaphor (driven in with extra emphasis by Connie’s comparisons to her mother, which is so clumsily awkward that I can only assume it’s to help the youngest members of the audience).

White as toxic matriarch is backed by some of the boarders’ best horror chops as she slowly erodes Steven’s sense of self, and it’s upsetting to watch at points. She is excellently built as a seemingly insurmountable, all-powerful figure, the way parents can become in the minds of young closeted kids.

Steven’s confrontation with himself is equally visceral. When separated from his gem (another long-standing subject of theorizing) they hammer home how close he is to death, drawing him all sweaty, with overly defined teeth and almost green-grey skin. The corresponding reunion is its polar opposite, warm and fluid and bouncy. So much love was poured into small details and ideas the Crewniverse has clearly had for a long time.

The defeat of White is shakier, particularly on second viewing. The implication seems to be that because Steven loses his awe and terror of her, it breaks her hold—she shows weakness, which makes her imperfect and therefore possible to speak to rather than simply oppose. As a metaphor for a parent, it makes sense where the writing is coming from: losing that feeling of terrified reverence makes it easier to break free of the need for their approval, and potentially to forgive them for their past cruelties and mistakes.

It’s difficult to begrudge given how common a struggle it is, and how few pieces of all-ages entertainment address it even on a metaphorical level. This is the point at which reading the success of this episode hangs somewhat on whether there will be future episodes.

If this is indeed the proper conclusion of the story, the return-to-Earth works as a representational, hopeful image—not a literal closure of everyone’s narratives a la “19 years later,” but singular gestures of goodwill that show us that the world is headed in a hopeful direction. Lars and Sadie have each come into their own, rather than being codependent and insecure. The Diamonds aren’t perfectly reformed but have contributed to the first step of healing the damage they did. The corrupted gems are themselves again. Everyone is home again, and Steven has made peace with himself, not “Rose’s son.”

It covers a lot quite effectively, as closing montages go. There are dozens of unanswered questions, but what’s important is that the overall tone is a hopeful one. Each plot thread we see touched on is heading in a positive direction, implying it will continue in that vein. It helps smooth over the cracks of that pure-metaphor defeat of White Diamond, even if it can’t undo all the unanswered questions. 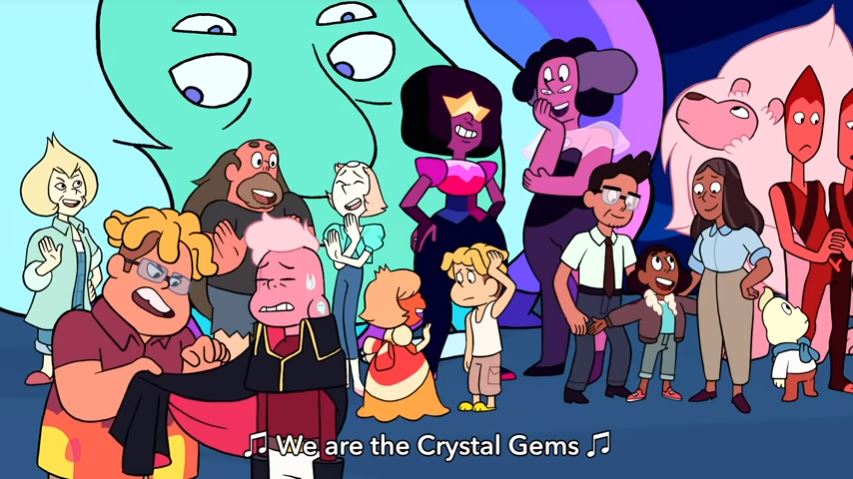 If the show wants to carry on, it has to open those questions back up and answer them. Where are the corrupted gems going to go? How far have the Diamonds actually come in dismantling millennia of toxic mentalities, which “Change Your Mind” only really has to represent as a one-off change of heart done in an intense moment of connection rather than the hard day-to-day work of becoming a better person. And what about that oppressive totalitarian regime, though?

None of these are things another season could likely address in a satisfying way. They’re the kind of slow, small battles that take years and years, and introducing another more powerful, more dangerous, and totally unmentioned antagonist, shonen anime-style, would feel cheap after the show’s protagonist has resolved his inner turmoil. There are stories left to tell in this universe, but they’re the stuff of fanfiction: “What-ifs” and time skips and character studies that can play with forms not suited to serialized animation.

It feels like time to say goodbye. Steven Universe has become a contentious series, to put it lightly, since it premiered almost six years ago. It was an uneven series that often overextended itself: the sensible cycle of “space action followed by slice-of-life stories” made sense in the thematic balancing of Steven’s two sides but also scuttled the show’s pacing as it passed the hundred-episode mark; the “broken family” metaphor, strong in isolation, clashes with the long emphasis on the Diamond Authority as an oppressive monstrosity; attempts to leave character subplots puttering along offscreen didn’t work in the same way they did for Adventure Time (as we’ve covered before); and someone thought it was a good idea to make multiple Ronaldo episodes.

It’s also impossible to understate what it did for queer representation in all-ages animation, and its best moments are some of the strongest of this new golden age of TV animation. It created memorable, deservedly beloved characters that I already miss. It raised the bar immensely for diversity, among both the cast and crew. The world of animation is irrevocably different because of Steven Universe, and for the better. Even with its flaws and my sometimes-intense frustrations with it, I wouldn’t have traded the chance to recap it for the world.

And I only hope that people keep discovering it for years to come.