Our Interview With the Cast and Creator of Cartoon Network’s Steven Universe! 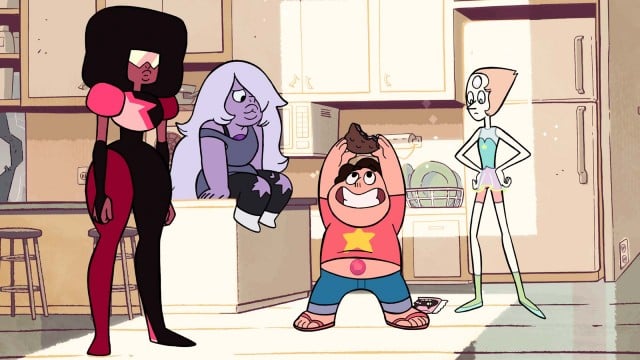 At New York Comic Con we had an amazing opportunity to sit down with Rebecca Sugar, creator and showrunner of Steven Universe, Cartoon Network’s first cartoon series created and run by a woman. With Adventure–Time-alumn Sugar were voice actors Zach Callison (who plays the titular Steven) and singer/actress Estelle (who provides the voice of the Gems’ leader, Garnet).

In case you haven’t checked out the series, now just a little more than half way through its first season, it concerns the adventures of a group of three near-immortal warrior women with gemstone-based magical powers and their young charge: a half-magical boy named Steven, the son of their late leader Rose Quartz, who “gave up her physical form” in order to have a child with her non-magical beloved, Greg Universe. Steven’s still quite young, and his powers are somewhat unreliable, and even more unknown to the Crystal Gems since they’ve never heard of any other half-magical people. But Steven does his best to keep his weird little family together and to help them get along with their human neighbors and to help with monster-fighting, artifact-recovering missions whenever he’s allowed.

So that’s the plot. More broadly, the show is doing fascinating things with gender, boldly presenting a male main character who is entirely comfortable and even excited about examples of female power, displaying a fantastically racially diverse cast, packaging magical girl tropes and aiming them squarely at a broad audience instead of just young girls, and commenting on its characters’ relationships with family, grief, responsibility, anxiety, escapist entertainment, and the idea of destiny.

But enough of my words! Let’s hear about the show from the folks who make it.

Reporter: How did the idea of Steven Universe come to fruition?

Rebecca Sugar: Fruition? Well, I started with wanting to do something about my younger brother Steven, and we were both big fantasy nerds growing up. So I wanted to try and combine the feeling of the video games we used to play and the stuff we used to watch, with how it actually felt to just be growing up with Steven; to have my best friend be my sibling. And that, to me, was the feeling I wanted to capture with the show.

The Mary Sue: The show has taken its time rolling out the larger details of the Gem’s world, but we’ve had a couple of episodes recently that really started things off, revealing some of those things. Is this the beginning of more frequent hints at the larger world, or is it going to maintain the same pace of exposition?

Sugar: Well, I think the snowball is rolling now. In an unstoppable way. There are things that are pretty complicated that are going on with the Gems, things that they don’t really think Steven is ready to know about, but it’s becoming impossible to ignore. And it’s going to become more impossible, increasingly impossible to ignore, as the season rolls out. So, please watch it! You’re gonna learn everything when he does, and soon.

Reporter: Estelle, how’d you get involved with Steven Universe, and are you excited about the new album coming out?

Estelle: Oh yeah, her people called my people. No! (laughter) No, they called my agent and the more I got to hear about [Garnet], the more I was like: “I think I can do that, it sounds like me… if…” I come from a huge family, I have five sisters and three brothers, and they’re all younger than me. So I understand taking care of being responsible for not screaming every three minutes, “Steven!” Being like, “If you don’t come here, I’ll give you the headlock!” I understand that whole energy too, so it was pretty easy. It’s been fun. I’m waiting, I’m excited for my new album. I’ve been working on that in-between everything. I kind of started on this process at the beginning of my last album. It’s fun. This just gives me extra—I’ve learned I have extra vocal abilities I hadn’t even known I had, with all the work. It’s kinda cool. Extra superpowers!

Reporter: Is there gonna be a chance for Garnet to get her own musical number?

Sugar: There’s a pretty good chance. But you think I’m gonna rush a song for Estelle? I wait.

Estelle: She’s an awesome songwriter, you know. The entire team that’s been doing songs on the show so far, I love them. The theme song itself is brilliant. (to Zach Callison) You sing pretty good in it.

Zach Callison: Thank you! Actually, my original audition was the theme song, the extended theme song. It had a little bit on the front. She actually had me sing it for the audition, when I recorded it and sent it in. In addition to doing the dialogue from the original pilot. And I was already impressed by that when I first heard the song on the audition.

Reporter: What’s it like being the main character on the show, being Steven?

Callison: Well, it’s the first time I’ve had a lead on a show before. But it’s really fun. I mean, getting to come in every week and work on a character like this on a show like this, that’s so much fun. It’s like the shows that I watched growing up on Cartoon Network. It’s kind of a dream come true. It’s a blast and I’m having a lot of fun with it.

Reporter: How important was it that you actually enjoyed the show yourself?

Callison: I think it makes it more fun, to be a part of a project. If you don’t enjoy the product that you’re working on, then can you say that you’re really getting satisfaction from working on it? Sometimes there are things that are tougher to do, maybe that you don’t like to do. But in the end it all leads up to things that are an integral part of your career but also that you really, really enjoy working on and will cherish.

Reporter: That’s a good way to do things, man.

Callison: Yeah, I gotta play the hero, man. Although I would like to do some more villain stuff. I haven’t really done much of anything in the actual “villain” thing. I’ve done some characters with attitudes or smart mouths, but never a villain. So that might be an interesting future path.

Sugar: It was fun in “Steven and the Stevens.”

Sugar: Because the Steven, well, our main timeline Steven, he learns to understand that he’s obnoxious, and at that point he becomes jaded and basically a jaded Steven can’t exist or it breaks the show, so he has to be destroyed. But there’s this five minutes of a seriously jaded and then kind of criminally insane Steven that you did an amazing job with.

Sugar: Also three very passive aggressive Stevens, all of that very good. That kind of Steven had never existed before.

Callison: And then eventually Steven mass-murder at the end of the episode, and then we’re left with… Steven.

Reporter: Rebecca, are there any animated works that you would consciously try to reference or pay homage to? There was one episode where Pearl clones herself and Steven has to deal with it. And some fans observed that some of the action choreography seemed to resemble things out of Revolutionary Girl Utena. Is there anything to that?

TMS: Garnet’s a very tight- lipped and taciturn character. And yet she’s taken on the leader role in the absence of Rose Quartz. Do you think that was a difficult transition for her? To sort of take on a role that meant she had to interact more with the other Gems?

Estelle: Little bit. I feel like, yeah. I understand, I completely identify. But I think she does a good job of it, and you see more and more as we go on that she’s becoming a bit more open and she’s a bit warmer to Steven. She’s less like “ARRR” and she’s been more like, “Okay Steven, it’s alright, you’re a young boy, you get it. You’re growing up.” It’s cool to see, I think, if you look at all the characters, it’s people being able identify with that. Something that’s highly identifiable is people that are really closed off, and really quite “to themselves,” and the more you get around people that you love and you grow with, the more you become open. She gets to it! It just takes her a minute.