Prepare to stuff your cheeseburger backpack. 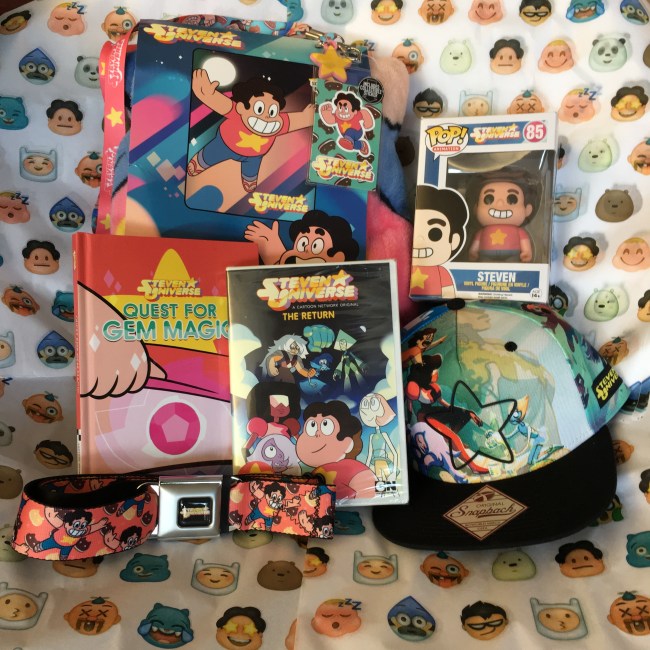 [UPDATED 6/28/15 at 3:50PM EST – Sorry, international SU fans! This giveaway is limited to people in the US only. Though if a US friend wants to enter for you and send you the stuff, we won’t tell anyone.]

Steven Universe continues to be one of our favorite shows, and we’re loving what we’re seeing so far during the “Summer of Steven!” Earlier this month, Cartoon Network released an awesome DVD called “The Return,” which features 12 episodes from Seasons 1 and 2 hand-picked by creator, Rebecca Sugar, making it a perfect gift for the person you’ve been trying to get into the show for ages. To celebrate the release of “The Return,” the folks at Cartoon Network have given us a pile of Steven Universe goodies to give to a very lucky reader!

Steven Universe: The Return, which retails for $14.97 SRP, features the following 11-minute episodes:

As for the giveaway, in addition to a copy of the new DVD, one lucky winner will also receive:

Short of delivering Rebecca Sugar and her ukelele directly to your home, this is the Steven Universe prize pack to end all prize packs. How do you enter, you ask?

All you have to do to enter is be sure you’re following us on Twitter (so we can DM you if you win!) and tweet the following in its entirety with no alterations:

You have until this Friday, July 1st at NOON EST to enter, and we will pick our winner then. Good luck!