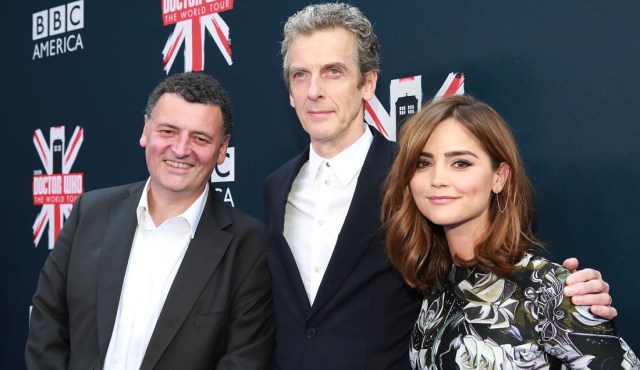 It’s safe to say Doctor Who showrunner Steven Moffat and fans of the show have a rocky relationship. There’ve been times where Moffat has greatly annoyed fans but on the flip side, fans have also greatly annoyed Moffat with their behavior. But as we learned during a BBC America press conference with Moffat, Peter Capaldi, and Jenna Coleman on Doctor Who: The World Tour, Moffat sees the positive, amazing side of Whovians as well, and it’s actually what he’d prefer to talk about.

Continuing the press conference chat we posted some of last week, the conversation turned to the fans of the sci-fi show. Moffat has previously admitted he was nervous about fan reaction to the 50th anniversary but also understands the awful reality of the Internet.

You know, when you read newspapers online, I’m sure you do, and there’s a comments section beneath it, and you read some perfectly reasonable news story and then a whole lot of insane people comment on it, saying “I’ve hated everybody since the dawn of time and my mom!” You think – it’s a story about a rescue dog, why are you so angry? [laughter] I think trying to assess Doctor Who’s audience from its online community would be like trying to assess world affairs from the comment sections below newspapers. I had this conversation, – name-dropping, Gale Anne Hurd – about you can’t mistake Twitter for the voice of the audience. I warn you now, Jenna. So – I’m aware of it. And it can be a difficult thing.

But aside from the negativity, Moffat also sees Whovians produce some amazing things and wanted to make sure to highlight them.

That’s amazing because so many times, and there’s a couple of examples sitting in front of you, there’s something magical about Doctor Who that makes the people, some of the people who watch it actually want to do it, actually want to make it, actually want to go and make Doctor Who or make another show, or even more bizarrely, this is the one I can’t get my head around, it makes some people and it has succeeded in this – it makes some people want to be scientists, presumably so they can look back at Doctor Who and think, “Wow. They made that shit up didn’t they?” [laughter] But that is – I wish I’d not done the first part of my answer, I wish I’d done the second part of my answer.

I think I just felt some warm and fuzzies, Moffat!

The talent went on to discuss another specific fan creation, with Jenna Coleman telling journalists in the room, it’s “nice to provoke a response.”

Coleman: The guy who made the rain trailer as well, do you remember? [Editor’s Note: We were very impressed by that one as well!]

Coleman: Came down to set as well and spent the day watching as a result of something that he did at home and made this amazing – I don’t know if anybody saw it, it was like a rain trailer and then came over from Canada.

Peter Capaldi: I think that’s true. I mean, the level of creativity is extraordinary and the constant use of taking clips and mashing them up and putting different music and doing their own versions of the same thing. I mean, it’s – you’re seeing kind of an organic film – embryonic filmmakers — at work. Working with new technology and doing it to levels of excellence which are quite extraordinary.

During the photoshoot which followed, I also mentioned the cosplay aspect of the fandom to Coleman. She told me she was looking forward to seeing Claras at the NYC fan event.