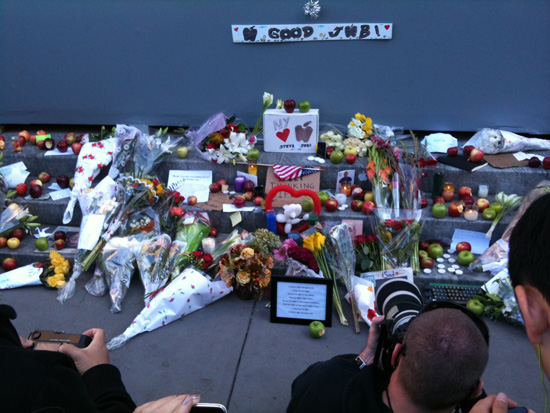 The death certificate of Steve Jobs shows that his cause of death is listed as respiratory arrest at around 3 pm on October 5, caused by a pancreatic tumor. He died in his home in Palo Alto, and his death certificate lists his occupation as “entrepreneur” in the area of “high tech.” There was no autopsy performed. On October 7, Jobs was buried at a non-denominational cemetery in Santa Clara. A few days before Jobs died, Apple contacted the the Palo Alto police department and notified them that Jobs was expected to die in the coming days. The police department was made aware so they could have patrols ready in case a large amount of mourners gathered at Jobs’ house.

In an internal email sent out by Tim Cook to Apple employees (seen below), it has been revealed that Apple will be holding an event to celebrate Jobs’ life, which will take place in on October 19 in the outdoor amphitheater on Apple’s Infinite Loop campus.

Like many of you, I have experienced the saddest days of my lifetime and shed many tears during the past week. But I’ve found some comfort in the extraordinary number of tributes and condolences from people all over the world who were touched by Steve and his genius. And I’ve found comfort in both telling and listening to stories about Steve.

Although many of our hearts are still heavy, we are planning a celebration of his life for Apple employees to take time to remember the incredible things Steve achieved in his life and the many ways he made our world a better place. The celebration will be held on Wednesday, October 19, at 10 a.m. in the outdoor amphitheater on the Infinite Loop campus. We’ll have more details on AppleWeb closer to the date, including arrangements for employees outside of Cupertino.

I look forward to seeing you there.