This Casemod is a Scooter, Your Argument is Invalid 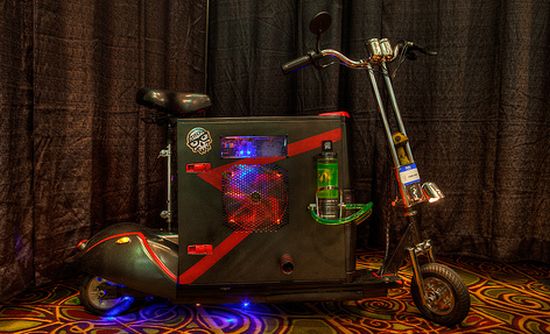 Stephen Popa, after wowing the internet with a casemod that turned a computer into a remote controlled, tank-treaded robot, has created an even more XKCD friendly computer: one that is also a ridable scooter.

The rig is built in a Thermaltake Element V case, it’s hardware, according to Popa, includes:

The scooter itself had to be extended almost a foot in order to comfortably fit the case, but the majority of those elements that you would expect in an electric scooter (like headlights and signals) have been preserved in operation.  The vehicle runs on a 24 volt battery that now sits inside the PC case, with the charging port disguised as a CD bay.

With that kind of integration, we’re surprised, but relived, that there isn’t a monitor welded to the handlebars.  Trying to perform a physical activity at high speed that is not connected to the video game you are playing is a bodily injury waiting to happen, as we found out when my brother tried to play Mirror’s Edge while jogging on a treadmill.