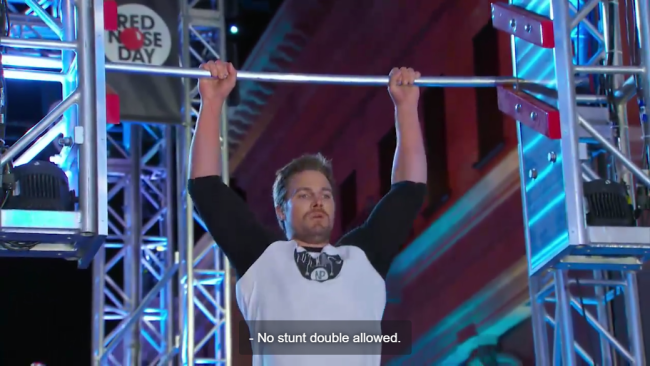 Stephen Amell, who plays Oliver Queen/Green Arrow on the CW’s Arrow, recently competed on American Ninja Warrior for charity – and he was really impressive.

Apparently, Amell has wanted to try running a ninja warrior course for a few years now, and Red Nose Day provided the perfect opportunity. NBC celebrates Red Nose Day, a fundraising campaign that raises money for charities like Boys & Girls Clubs of America, charity: water, National Council of La Raza, Save the Children, The Global Fund, and more, with a night of special programming each year. This year, they ran a celebrity version of American Ninja Warrior as part of the night, and so Amell signed right up.

“I can’t think of a more fun way to raise money for Red Nose Day!” he wrote on Facebook after the episode aired. “Check out my entire run! Thanks to NBC, Kacy Catanzaro & all the Ninja Warrior people. I might have to come back.”

On Arrow, Amell’s Oliver Queen often works out on a salmon ladder – the workout routine was even “one of the most talked about moments in the pilot” – so fans were pretty delighted to see a salmon ladder appear as part of his American Ninja Warrior course. Amell performs most of his own stunts on the show, minus some of the more dramatic moments, and he confirmed that he isn’t on a harness when they show him using the salmon ladder.

Amell completed the first course (along with some of the second course) and thereby raised $35,000 for Red Nose Day, contributing to NBC’s total haul of $35 million.

(Via io9 and CBR; image via screengrab)