They would have got away with this if it hadn't been for you meddling kids! 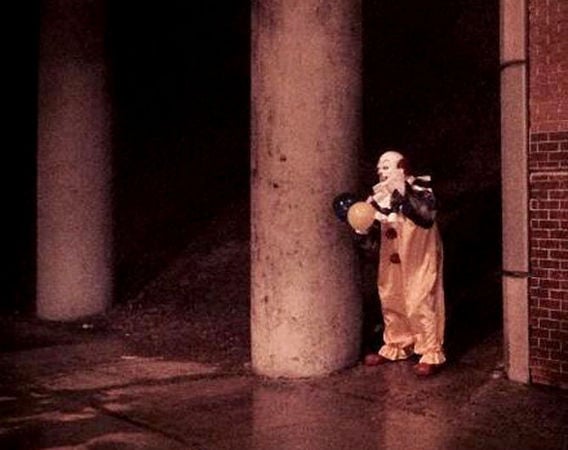 Residents of Staten Island were understandably jarred by recent sightings of this mysterious and undeniably creepy clown, and an increase in appearances over the weekend caused obvious concern. Although we have to image the clown is pretty scared too because it’s on Staten Island.

Residents took to social media to post pictures and tweets of the silently waving mystery man outside of the South Shore, Richard Valley, and Grasmere Train Stations. Startled Staten Islander Robert Privitera caught a glimpse of the clown, and had what we’d call a pretty level-headed reaction considering:

Alarmingly, the #SIClown is just one representative of what appears to be part of a growing trend. In January we reported that a mysterious gun-toting clown was terrorizing Melbourne, and Northampton, England was also menaced by a man dressed as Pennywise. Not to mention all those clowns we have in Washington D.C., huh? Yuk yuk yuk, but seriously: is there some wider clown conspiracy at work here to make us all float? Is there…an insane clown posse?

Apparently not on Staten Island, where Staten Island Live is reporting the clown case may have been cracked, saying “It seems that we — and a bunch of other media outlets — were had.” Robert Privitera and three other men who posted images of New York’s own Pennywise all have ties to the same production company, Fuzz On The Lens.

When asked if the train station clown was part of an elaborate promotional scheme, Staten Island Live reports that comedian Vic Dibitetto, who took a video of the clown that went viral, responded via Faceook message with “I also know where the Malaysian airliner is,” thereby unmasking himself as history’s least funny clown.

Regardless of the tastelessness of the quartet’s possible prank or their ensuing comments, they definitely got the attention they hoped for Fuzz On The Lens. Horror writer Joe Hill, son of Stephen King, even tweeted

via @sarahw, TerrorClown haunts Staten Island. Pretty sure he was in Northampton, UK, just a month ago: http://t.co/EMC5kUGuso

Of course, if there is a secret global clown Illuminati, wouldn’t Stephen King and subsequently his heirs be in on it too? Hmm…this might go higher up than we first thought.