"What the show needs is a sexy female alien!" 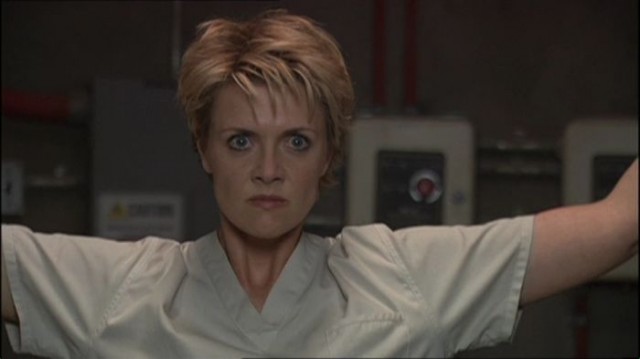 I keep thinking that if I just close my eyes and sing the Stargate SG-1 theme song loud enough, news of the franchise being rebooted by original movie director Roland Emmerich will just cease to exist. Sadly, I have traveled through a Quantum Mirror into the worst timeline and now the reboot even has writers attached. Where is General Hammond to protect the sanctity of the Stargate program when you need him?

Reports say that Nicolas Wright and James A. Woods are in “final negotiations” to write what will now be the first film in a trilogy of franchise-destroying films which will include absolutely no reference to Sam Carter, Ronon Dex, or Eli Wallace.

Both Wright and Woods are completely unproven as writers in Hollywood; their only credit is having worked on the as-yet-unseen Independence Day 2 script that Emmerich is also developing in order to ruin the flawlessness of that original film as well. But, you know, Woods was a voice actor in The Smurfs 2, so there’s that.

MGM will be running production on the new Stargate film, despite having no interest in revitalizing the franchise with a new television show since the cancellation of Stargate Universe in 2011.

As a die-hard Stargate fan, I just can’t express my disappointment with this whole situation enough. Not only are they alienating their core fanbase, I think they’re wildly overestimating the general public’s interest in seeing this franchise rebooted (and I say that with all the love in the world). The TV shows developed a rich and storied universe from which tons of new stories could be told; it makes very little sense to just do a straight-up remake of the first film – which is sweet, but has plenty of limitations (eg. the Stargate only goes to one place; the bad guy is completely indeterminate and not part of a larger species, etc.) – just so Emmerich can go back and make the two sequel films he was never “allowed” to make because of the massive success of the franchise that spun off of his first film. A franchise, may I add, that was on the air for an unprecedented fourteen years and undoubtedly made Emmerich boatloads of money. I’ve always found his distaste for the expanded Stargate universe to be completely out of line.

TL;DR Roland Emmerich can go suck a lemon, and I’m going back to my Stargate DVDs.