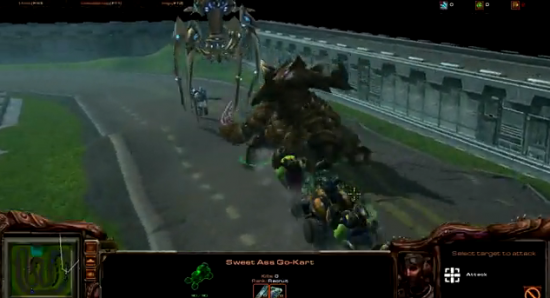 The world of StarCraft II has been brimming with activity lately. The game has yet to get an official release date (though it’s expected to come out in the first half of 2010), but last week, it got a big, sweeping update — including the first release of the map editor — and today, Blizzard released the Mac client for the StarCraft II multiplayer beta.

This item concerns the first of the two. Modder Everdraed used the SC2 beta map editor to create an awesome Mario Kart-like racing map for the game. Everdraed writes on YouTube that he or she plans to do a “bunch of work on this map to actually make it a fun little diversion,” but this is an impressive effort, considering it dropped just one day after the map editor was released.

Granted, the ability to create something like is probably no huge surprise to Blizzard followers based on map editors they’ve released in the past, but this is a neat and creative use of the StarCraft II toolbox, and heralds some of the cool applications we’ll being seeing when (and if!) the general public finally gets ahold of the game.